Francesco Saverio Castiglioni was born in Cingoli, Marche, the third of eight children of Count Ottavio Castiglioni and his wife Sanzia Ghislieri. His baptismal name was recorded as Francesco Saverio Maria Felice. He studied at the Collegio Campana run by the Society of Jesus and then studied at the University of Bologna where he earned a doctorate in canon law and in civil law in 1785[1]

Castiglione received episcopal consecration in 1800 in Rome and commenced his work in his new diocese. After he refused to swear allegiance to Napoleon I of France (1804–14, 1815) he was taken to a series of Italian cities before being sent to France. After Napoleon fell, he returned to his diocese in 1814. He was praised by Pope Pius VII who in 1816 elevated him to the cardinalate as the Cardinal-Priest of Santa Maria in Traspontina. He held various high offices thereafter, including that of Major Penitentiary. He soon became a Cardinal-Bishop of the suburbicarian see of Frascati.

"As a Cardinal, Castiglione had continued to live modestly, made no enemies, and although his own private life had always been irreproachable, he had shown no signs of censoriousness where others were concerned. He suffered from a very painful and distressing complaint, having perpetually suppurating sores on his neck and body, and [later as pope] was far too ill and feeble to do more than sign the documents presented to him by Cardinal Giuseppe Albani, who ruled the Papal States as autocratically as though he had himself worn the triple crown."[2]

After the death of Pope Leo XII in 1829, Castiglioni was considered to be a candidate though was questioned due to his frail health. Still, he had been a front runner in the previous conclave and Pope Leo XII had said that he was "some day to be Pius VIII". Even Pope Pius VII had made a similar comment. He was elected as pope in the papal conclave and given that both Leo XII and Pope Pius VII had referred to him as Pius VIII, it was only suitable that it was the pontifical name that he chose. His coronation took place on 5 April 1829 where the protodeacon Cardinal Giuseppe Albani crowned him.

As Pope Pius VIII, he initiated some reforms in the states of the Church. On 24 May 1829 he issued an encyclical, Traditi humilitati. Perhaps indicating that the current debate on religious pluralism was also occurring in his own time he condemned the "foul contrivance of the sophists of this age" that would place Catholicism on par with any other religion.

Regarding Bible translations, he wrote in that encyclical:

We must also be wary of those who publish the Bible with new interpretations contrary to the Church's laws. They skillfully distort the meaning by their own interpretation. They print the Bibles in the vernacular and, absorbing an incredible expense, offer them free even to the uneducated. Furthermore, the Bibles are rarely without perverse little inserts to ensure that the reader imbibes their lethal poison instead of the saving water of salvation.

On 25 March 1830, in the brief Litteris altero, he condemned the masonic secret societies and modernist biblical translations.

His brief pontificate saw the Catholic Emancipation in the United Kingdom and the July Revolution in France (1830). Pius VIII recognised Louis Philippe (1830–48) as French king and even allowed him to use the French king's customary honorific "Roi Très Chretien" ("Most Christian King").

Pius VIII accepted the situation on mixed marriages between Protestants and Catholics in Germany, but he opposed changes in Ireland and Poland.

Pius VIII also held three consistories in which he elevated six new cardinals into the cardinals and he held these ceremonies on 27 July 1829, 15 March 1830 and 5 July 1830, the last of his pontificate. 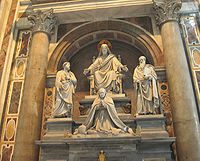 The monument to Pius VIII.

Pius VIII was in very poor health from his election until his death one year after the conclave. He died on 30 November 1830 at the age of 69 in the Quirinal Palace, Rome. Prince Don Agostino Chigi, a contemporary of the late pope's and one of the papal nobility associated with the papal court, recorded in his diary (2 December 1830):

(Translation: "During the dissection of the Pope's body, which occurred yesterday evening, as far as they say, only very healthy internal organs (viscera) were found, except some weakness of the lungs, or, according to others, a tired heart; it is therefore impossible to know the cause of death.")

These few words have been interpreted by some partisans of a conspiracy theory as evidence that the late pontiff had indeed been poisoned. Cardinal Camillo di Pietro gave the funeral ovation for the late pope, before the cardinals entered the conclave to choose a successor. The late pope was succeeded by Pope Gregory XVI.