Pope Sixtus I (42 – 125) was the Bishop of Rome from c. 115 to his death c. 124.[1] He succeeded Pope Alexander I and was succeeded by Pope Telesphorus. In the oldest documents, Xystus (from the Greek word for "polished") is the spelling used for the first three popes of that name. Pope Sixtus I is also the sixth Pope after Peter, leading to questions whether the name "Sixtus" (meaning "sixth") is fictitious.[2]

The Holy See's Annuario Pontificio (2012) identifies him as a Roman who served from 117 or 119 to 126 or 128.[1] According to the Liberian Catalogue of popes, he served the Church during the reign of Hadrian "a consulatu Negro et Aproniani usque Vero III et Ambibulo", that is, from 117 to 126.[1] Eusebius states in his Chronicon that Sixtus I was pope from 114 to 124, while his Historia Ecclesiastica, using a different catalogue of popes, claims his rule from 114 to 128. All authorities agree that he reigned about ten years.[1]

Sixtus I instituted several Roman Catholic liturgical and administrative traditions. Like most of his predecessors, Sixtus I was believed to be buried near Saint Peter's grave on Vatican Hill, although there are differing traditions concerning where his body lies today.

He was a Roman by birth, and his father's name was Pastor. According to the Liber Pontificalis (ed. Duchesne, I.128), he passed the following three ordinances:

Alban Butler (Lives of the Saints, 6 April) states that Clement X gave some of his relics to Cardinal de Retz, who placed them in the Abbey of St. Michael in Lorraine. The Xystus who is commemorated in the Catholic Canon of the Mass is Xystus II, not Xystus I.

His feast is celebrated on 6 April.[1] 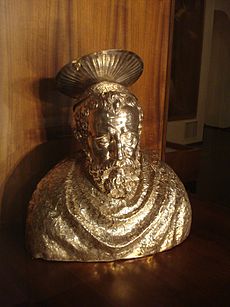 Reliquary of the Pope, made in 1596, exhibited at The Permanent Ecclesiastical Art Exhibition "The Gold and Silver of Zadar" in the St. Mary's Church, Zadar, Croatia