Pope Sixtus IV (21 July 1414 – 12 August 1484), born Francesco della Rovere, was pope from 9 August 1471 to his death in 1484. His accomplishments as pope included building the Sistine Chapel; the group of artists that he brought together introduced the Early Renaissance into Rome with the first masterpieces of the city's new artistic age. He also established the Vatican Archives. Sixtus furthered the agenda of the Spanish Inquisition and annulled the decrees of the Council of Constance. He was famed for his nepotism and was personally involved in the infamous Pazzi Conspiracy.[1]

Francesco was born to a family of modest means from Liguria, Italy, the son of Leonardo della Rovere and Luchina Monleoni. He was born in Celle Ligure, a town near Savona.[2]

As a young man Della Rovere joined the Franciscan Order, an unlikely choice for a political career, and his intellectual qualities were revealed while he was studying philosophy and theology at the University of Pavia. He went on to lecture at Padua and many other Italian universities.[3]

In 1464, Della Rovere was elected Minister General of the Franciscan order at the age of 50. In 1467, he was appointed Cardinal by Pope Paul II with the titular church being the Basilica of San Pietro in Vincoli. Before his papal election, Cardinal della Rovere was renowned for his unworldliness and had even written learned treatises entitled On the Blood of Christ and On the Power of God.[4] His pious reputation was one of the deciding factors that prompted the College of Cardinals to elect him pope upon the unexpected death of Paul II at the age of fifty-four.[5]

Upon being elected pope Della Rovere adopted the name Sixtus – a name that had not been used since the 5th century. One of his first acts was to declare a renewed crusade against the Ottoman Turks in Smyrna. However, after the conquest of Smyrna, the fleet disbanded.[6] Some fruitless attempts were made towards unification with the Greek Church. For the remainder of his pontificate, Sixtus turned to temporal issues and dynastic considerations. 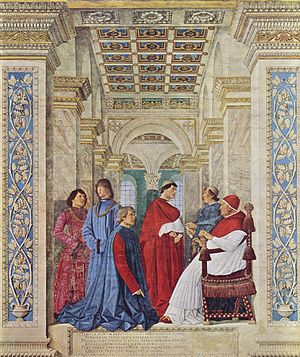 Pope Sixtus IV appoints Platina as Prefect of the Library, by Melozzo da Forlì, accompanied by his relatives

Sixtus IV sought to strengthen his position by surrounding himself with relatives and friends. In the fresco by Melozzo da Forlì he is accompanied by his Della Rovere and Riario nephews, not all of whom were made cardinals: the protonotary apostolic Pietro Riario (on his right), the future Pope Julius II standing before him, and Girolamo Riario and Giovanni della Rovere behind the kneeling Platina, author of the first humanist history of the Popes.[7] His nephew Pietro Riario also benefited from his nepotism. Pietro became one of the richest men in Rome and was entrusted with Pope Sixtus' foreign policy. However, Pietro died prematurely in 1474, and his role passed to Giuliano della Rovere.

The secular fortunes of the Della Rovere family began when Sixtus invested his nephew Giovanni with the lordship of Senigallia and arranged his marriage to the daughter of Federico III da Montefeltro, duke of Urbino; from this union came a line of Della Rovere dukes of Urbino that lasted until the line expired in 1631.[8] Six of the thirty-four cardinals that he created were his nephews.[9]

In his territorial aggrandizement of the Papal States, Sixtus' niece's son Cardinal Raffaele Riario, for whom the Palazzo della Cancelleria was constructed, was a leader in the failed "Pazzi conspiracy" of 1478 to assassinate both Lorenzo de' Medici and his brother Giuliano and replace them in Florence with Sixtus IV's other nephew, Girolamo Riario. Francesco Salviati, Archbishop of Pisa and a main organizer of the plot, was hanged on the walls of the Florentine Palazzo della Signoria. To this, Sixtus IV replied with an interdict and two years' of war with Florence.

According to the later published chronicle of the Italian historian Stefano Infessura, "Diary of the City of Rome", Sixtus was a "lover of boys and sodomites" - awarding benefices and bishoprics in return for sexual favours, and nominating a number of young men as cardinals; some of whom were celebrated for their good looks.[10][11][12] However, Infessura had partisan allegiances to the Colonna and so is not considered to be always reliable or impartial.[13] The English churchman and protestant polemicist John Bale writing a century later, attributed to Sixtus "the authorisation to practice sodomy during periods of warm weather" to the "Cardinal of Santa Lucia".[14] However, such accusations are easily dismissed as anti-Catholic propaganda,[10] but did nevertheless prompt the noted historian of the Catholic Church, Ludwig von Pastor, to issue a firm rebuttal.[15]

Sixtus continued a dispute with King Louis XI of France, who upheld the Pragmatic Sanction of Bourges (1438), according to which papal decrees needed royal assent before they could be promulgated in France.[3] This was a cornerstone of the privileges claimed for the Gallican Church, and could never be shifted as long as Louis XI maneuvered to replace King Ferdinand I of Naples with a French prince. Louis was thus in conflict with the papacy and Sixtus could not permit it.

On 1 November 1478, Sixtus published the papal bull Exigit Sincerae Devotionis Affectus, through which the Spanish Inquisition was established in the Kingdom of Castile. Sixtus consented under political pressure from Ferdinand of Aragon, who threatened to withhold military support from his kingdom of Sicily.[citation needed] Nevertheless, Sixtus IV quarrelled over protocol and prerogatives of jurisdiction, was unhappy with the excesses of the Inquisition and condemned the most flagrant abuses in 1482.[16]

As a temporal prince who constructed stout fortresses in the Papal States, he encouraged the Venetians to attack Ferrara, which he wished to obtain for another nephew. Ercole I d'Este, Duke of Ferrara, was allied with the Sforzas of Milan, the Medicis of Florence along with the King of Naples, normally a hereditary ally and champion of the papacy. The angered Italian princes allied to force Sixtus IV to make peace, to his great annoyance.[3] For refusing to desist from the very hostilities that he himself had instigated (and for being a dangerous rival to Della Rovere dynastic ambitions in the Marche), Sixtus placed Venice under interdict in 1483. He also lined the coffers of the state by unscrupulously selling high offices and privileges.[6]

The two papal bulls issued by Pope Nicholas V, Dum Diversas of 1452 and Romanus Pontifex of 1455, had effectively given the Portuguese the rights to acquire slaves along the African coast by force or trade. These concessions were confirmed by Sixtus in his own bull, Aeterni regis of 21 June 1481.[17] Arguably the "ideology of conquest" expounded in these texts became the means by which commerce and conversion were facilitated.[18]

In November 1476 Isabel and Fernando ordered an investigation into rights of conquest in the Canary Islands, and in the spring of 1478 they sent Juan Rejon with sixty soldiers and thirty cavalry to the Grand Canary, where the natives retreated inland. Sixtus' earlier threats to excommunicate all captains or pirates who enslaved Christians in the bull Regimini Gregis of 1476 could have been intended to emphasise the need to convert the natives of the Canary Islands and Guinea and establish a clear difference in status between those who had converted and those who resisted.[19] The ecclesiastical penalties were directed towards those who were enslaving the recent converts.[20] 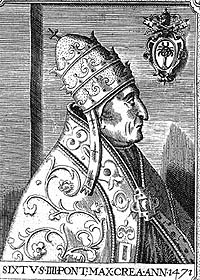 As a civic patron in Rome, even the anti-papal chronicler Stefano Infessura agreed that Sixtus should be admired. The dedicatory inscription in the fresco by Melozzo da Forlì in the Vatican Palace records: "You gave your city temples, streets, squares, fortifications, bridges and restored the Acqua Vergine as far as the Trevi..." In addition to restoring the aqueduct that provided Rome an alternative to the river water that had made the city famously unhealthy, he restored or rebuilt over 30 of Rome's dilapidated churches, among them San Vitale (1475) and Santa Maria del Popolo, and added seven new ones. The Sistine Chapel was sponsored by Sixtus IV, as was the Ponte Sisto,[7] the Sistine Bridge – the first new bridge across the Tiber since antiquity – and the building of Via Sistina (later named Borgo Sant'Angelo), a road leading from Castel Sant'Angelo to Saint Peter. All this was done to facilitate the integration of the Vatican Hill and Borgo with the heart of old Rome. This was part of a broader scheme of urbanization carried out under Sixtus IV, who swept the long-established markets from the Campidoglio in 1477 and decreed in a bull of 1480 the widening of streets and the first post-Roman paving, the removal of porticoes and other post-classical impediments to free public passage. 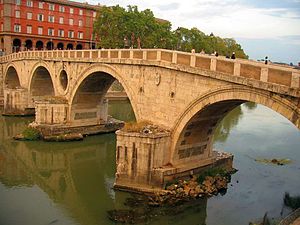 Ponte Sisto, the first bridge built at Rome since the Roman Empire

At the beginning of his papacy in 1471, Sixtus donated several historically important Roman sculptures that founded a papal collection of art that would eventually develop into the collections of the Capitoline Museums. He also re-founded, enriched and enlarged the Vatican Library.[7] He had Regiomontanus attempt the first sanctioned reorganization of the Julian calendar and increased the size and prestige of the papal chapel choir, bringing singers and some prominent composers (Gaspar van Weerbeke, Marbrianus de Orto, and Bertrandus Vaqueras) to Rome from the North.

In addition to being a patron of the arts, Sixtus was a patron of the sciences. Before becoming pope, he spent time at the then very liberal and cosmopolitan University of Padua, which maintained considerable independence from the Church and had a very international character. As Pope, he issued a papal bull allowing local bishops to give the bodies of executed criminals and unidentified corpses to physicians and artists for dissection. It was this access to corpses which allowed the anatomist Vesalius, along with Titian's pupil Jan Stephen van Calcar, to complete the revolutionary medical/anatomical text De humani corporis fabrica.

Pope Sixtus' tomb was destroyed in the Sack of Rome in 1527. Today, his remains, along with the remains of his nephew Pope Julius II (Giuliano della Rovere), are interred in St. Peter's Basilica in the floor in front of the monument to Pope Clement X. A simple marble tombstone marks the site.

His bronze funerary monument, now in the basement Treasury of St. Peter's Basilica, like a giant casket of goldsmith's work, is by Antonio Pollaiuolo. The top of the casket is a lifelike depiction of the Pope lying in state. Around the sides are bas relief panels, depicting with allegorical female figures the arts and sciences (Grammar, Rhetoric, Arithmetic, Geometry, Music, Painting, Astronomy, Philosophy, and Theology). Each figure incorporates the oak tree ("rovere" in Italian) symbol of Sixtus IV. The overall program of these panels, their beauty, complex symbolism, classical references, and arrangement relative to each other is one of the most compelling and comprehensive illustrations of the Renaissance worldview.

The cardinals of Sixtus IV

Sixtus created an unusually large number of cardinals during his pontificate (twenty-three), drawn from the roster of the princely houses of Italy, France and Spain; thus ensuring that many of his policies continued after his death:

Pope Sixtus is portrayed by James Faulkner in the historical fantasy Da Vinci's Demons. In this show, he is portrayed as having an identical twin, Alessandro. Shortly after the true Pope Sixtus, Francesco, was elected on conclave, Alessandro usurped the Holy See and had his brother locked up in Castel Sant'Angelo. The series thus implies that many of the more unsavory parts of Sixtus' reign were really the work of his twin, out to gain power for himself.