A porch (from Old French porche, from Latin porticus "colonnade", from porta "passage") is a construction usually external to the walls of the main building proper, but may be enclosed by latticework, broad windows, screen, or other light frame walls extending from the main structure.

There are various styles of porches, all of which depend on the architectural tradition of its location. All porches will allow for sufficient space for a person to comfortably pause before entering or after exiting the building. However, they may be larger. Verandahs, for example, are usually quite large and may encompass the entire facade as well as the sides of a structure. An extreme example is the Grand Hotel on Mackinac Island, Michigan, which has the longest porch in the world at 660 feet (200 m) in length.

In northeastern North America, a porch is a small area, usually unenclosed, at the main-floor height and used as a sitting area or for the removal of working clothes so as not to get the home's interior dirty, when the entrance door is accessed via the porch. In the Southwestern United States, ranch-style homes often use a covered porch to provide shade for the entrance and southern wall of the residence.

In the Southern United States and Southern Ontario, Canada, a porch is often at least as broad as it is deep, and it may provide sufficient space for residents to entertain guests or gather on special occasions. Adobe-style homes in Santa Fe, New Mexico, often include large porches for entertainment called 'portals,' which are not usually seen in the more traditional adobe homes.

Older American homes, particularly those built during the era of Victorian architecture, or built in the Queen Anne style, often included a porch in both the front and the back of the home. The back porch is used as another sitting space. However, many American homes built with a porch since the 1940s have only a token one, usually too small for comfortable social use and adding only to the visual impression of the building.

The New Urbanism movement in architecture urges a reversal in this trend, recommending a large front porch, to help build community ties.[1]

When spacious enough, a covered porch not only provides protection from sun or rain but comprises, in effect, extra living space for the home during pleasant weather — accommodating chairs or benches, tables, plants, and traditional porch furnishings such as a porch swing, rocking chairs, or ceiling fans.

Some porches are screened in to exclude flying insects. Normally, the porch is architecturally unified with the rest of the house, using similar design elements. It may be integrated into the roof line or upper storey.

In Great Britain the projecting porch had come into common use in (Catholic) churches by early medieval times. They were usually built of stone but occasionally were of timber. Normally they were placed on the south side of the church, but also on the west and north sides, sometimes in multiple. The porches served to give cover to worshipers, but they also had a liturgical use. At a baptism, the priest would receive the sponsors, with the infant, in the porch and the service began there.

In later medieval times, the porch sometimes had two storeys, with a room above the entrance which was used as a local school, meeting room, storeroom, or even armoury. If the village or town possessed a collection of books, it would be housed there.

Sometimes the church custodian lived in the upper storey and a window into the church would allow supervision of the main church interior. Some British churches have highly ornamented porches, both externally and internally. The south porch at Northleach, Gloucestershire, in the Cotswolds, built in 1480, is a well-known example, and there are several others in East Anglia and elsewhere in the UK.[2] 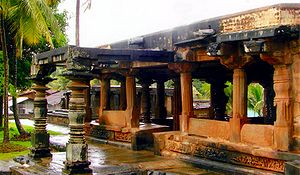 In India porches and verandahs are popular elements of secular as well as religious architecture. In the Hindu temple the mandapa is a porch-like structure through the gopuram (ornate gateway) and leading to the temple. It is used for religious dancing and music and is part of the basic temple compound.[3] Examples of Indian buildings with porches include: