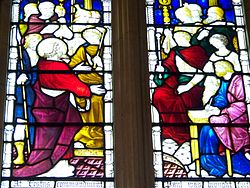 Porcius Festus was procurator of Judea from about AD 59 to 62, succeeding Antonius Felix. His exact time in office is not known. The earliest proposed date for the start of his term is c. A.D. 55-6, while the latest is A.D. 61.[1] These extremes have not gained much support and most scholars opt for a date between 58 to 60. F. F. Bruce says that, "The date of his [Felix's] recall and replacement by Porcius Festus is disputed, but a change in the provincial coinage of Judaea attested for Nero's fifth year points to A.D. 59"[2] Conybeare and Howson lay out an extended argument for the replacement taking place in A.D. 60.[3]

Festus inherited all of the problems of his predecessor in regard to the Roman practice of creating civic privileges for Jews. Only one other issue bedeviled his administration, the controversy between Agrippa II and the priests in Jerusalem regarding the wall erected at the temple to break the view of the new wing of Agrippa's palace.

During his administration, Jewish hostility to Rome was greatly inflamed by the civic privileges issue. Feelings were aroused which played an important part in the closely following Jewish War of AD 66.

In the New Testament, the Apostle Paul had his final hearing before Festus. In Acts 25:12, Festus sought to induce Paul to go to Jerusalem for trial; Paul appealed to the Emperor. The appeal resulted in Paul being sent to Rome for judgement by the Emperor himself although Festus had difficulty in detailing charges against him.Acts 25-26