A pork pie is a traditional British meat pie. It consists of roughly chopped pork and pork jelly sealed in a hot water crust pastry.[1] It is normally eaten cold as a snack or as part of a meal.

The common pie uses cured meat. Often produced in moulds or form, it gives the outside of the pie a very regular shape and the inside filling a pink colour. It is easier, simpler and cheaper to produce in volume, and hence the more common choice for commercial manufacturers.

An annual pork pie competition is held in April at The Old Bridge Inn, Ripponden, Yorkshire.[2] 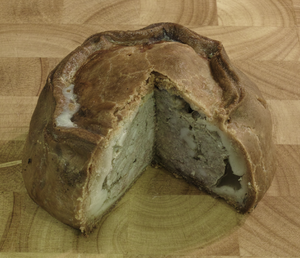 The Melton Mowbray pork pie is named after Melton Mowbray, a town in Leicestershire.[3] Melton pies became popular among fox hunters in the area during the late eighteenth century.[4]

The uncured meat of a Melton pie is grey in colour when cooked; the meat is chopped, rather than minced. The pie is made with a hand-formed crust, giving the pie a slightly irregular shape after baking. As the pies are baked free-standing, the sides bow outtwards, rather than being vertical as with mould-baked pies.[5]

In light of the premium price of the Melton Mowbray pie, the Melton Mowbray Pork Pie Association applied for protection under the European "Protected designation of origin" laws as a result of the increasing production of Melton Mowbray-style pies by large commercial companies in factories far from Melton Mowbray, and recipes that deviated from the original uncured pork form. Protection was granted on 4 April 2008, with the result that only pies made within a designated zone around Melton, and using the traditional recipe including uncured pork, are allowed to carry the Melton Mowbray name on their packaging.[6] 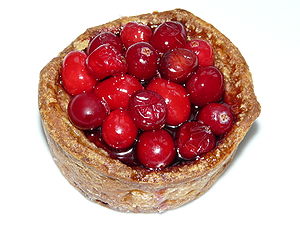 A common variation on the common pork pie is the gala pie: a pie in which the pork is mixed with chicken and with a hard boiled egg in the centre. Gala pies are often baked in long, loaf-type tins, with multiple eggs arranged along the centre. The so-called "long egg" in Gala pies is actually made of several eggs. The yolks are separated from the whites and the yolks are then poured into a long tube-shaped mould in which they are cooked. The hard yolk is removed from the mould then put inside a larger tube-shaped mould and the egg whites are poured round the outside of the hard yolk. The whole thing is then cooked again to harden the whites around the yolk. This is then removed from the mould thus producing one very long hard-boiled egg.[7]

A picnic pie is commonly available as smaller (3 to 5 in [8 to 13 cm]) varieties and ideal for picnics, usually with additional ingredients added to the pork and jelly filling mixture. Fillings added to the pork include apples, pickles and bacon.

In some cases the solid pastry top is replaced by a pastry lattice, allowing the meat filling to be seen. A recent development is to have a layer of Branston pickle inserted under the lattice crust. Occasionally the top crust is dispensed with altogether in favour of a layer of cranberries sealed into place with aspic jelly.