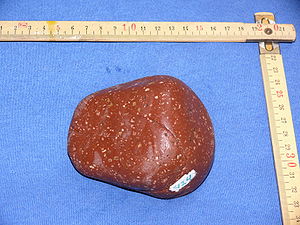 A piece of porphyry 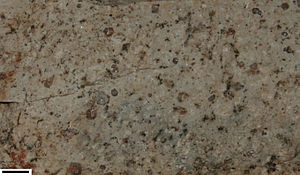 Porphyry is a textural term for an igneous rock consisting of large-grained crystals such as feldspar or quartz dispersed in a fine-grained feldspathic matrix or groundmass. The larger crystals are called phenocrysts. In its non-geologic, traditional use, the term "porphyry" refers to the purple-red form of this stone, valued for its appearance.

The term "porphyry" is from Greek and means "purple". Purple was the color of royalty, and the "Imperial Porphyry" was a deep purple igneous rock with large crystals of plagioclase. The rock was the hardest known in antiquity[1] and was prized for monuments and building projects in Imperial Rome and later.

Subsequently, the name was given to any igneous rocks with large crystals. The adjective porphyritic now refers to a certain texture of igneous rock regardless of its chemical and mineralogical composition. Its chief characteristic is a large difference in size between the tiny matrix crystals and the much larger phenocrysts. Porphyries may be aphanites or phanerites, that is, the groundmass may have invisibly small crystals as in basalt, or crystals easily distinguishable with the eye, as in granite. Most types of igneous rocks display some degree of porphyritic texture.

Porphyry deposits are formed when a column of rising magma is cooled in two stages. In the first, the magma is cooled slowly deep in the crust, creating the large crystal grains with a diameter of 2 mm or more. In the second and final stage, the magma is cooled rapidly at relatively shallow depth or as it erupts from a volcano, creating small grains that are usually invisible to the unaided eye. 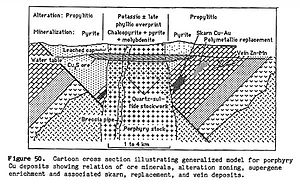 Diagram of zonation in a porphyry copper deposit

The term porphyry is also used for a mineral deposit called a "copper porphyry". The different stages of cooling that create porphyritic textures in intrusive and hypabyssal porphyritic rocks also lead to a separation of dissolved metals into distinct zones. This process, which occurs primarily when fluids are driven off the cooling magma, is one of the main reasons for the existence in the world of rich, localized metal ore deposits such as those of gold, copper, molybdenum, lead, tin, zinc, rhenium and tungsten. This enrichment occurs in the porphyry itself, or in other related igneous rocks or surrounding country rocks, especially carbonate rock (in a process similar to skarns). Collectively, these type of deposits are known as "porphyry copper deposits".[2]

Rhomb porphyry is a volcanic rock with gray-white large porphyritic rhomb- shaped phenocrysts embedded in a very fine-grained red-brown matrix. The composition of rhomb porphyry places it in the trachyte–latite classification of the QAPF diagram.

Rhomb porphyry lavas are only known from three rift areas: the East African Rift (including Mount Kilimanjaro), Mount Erebus near the Ross Sea in Antarctica, and the Oslo graben in Norway. It is intrusive. 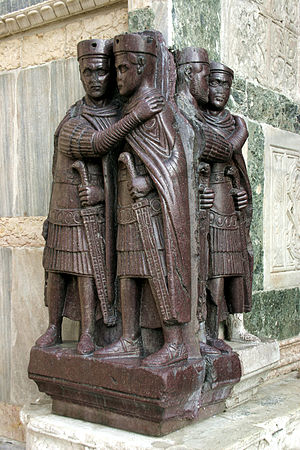 The Tetrarchs, a porphyry sculpture sacked from the Byzantine Philadelphion palace in 1204, Treasury of St. Marks, Venice

Pliny's Natural History affirmed that the "Imperial Porphyry" had been discovered at an isolated site in Egypt in AD 18, by a Roman legionary named Caius Cominius Leugas.[3] It came from a single quarry in the Eastern Desert of Egypt, from 600 million-year-old andesite of the Arabian-Nubian Shield. The road from the quarry westward to Qena (Roman Maximianopolis) on the Nile, which Ptolemy put on his second-century map, was first described by Strabo, and it is to this day known as the Via Porphyrites, the Porphyry Road, its track marked by the hydreumata, or watering wells that made it viable in this utterly dry landscape. Porphyry was extensively used in Byzantine imperial monuments, for example in Hagia Sophia[4] and in the "Porphyra", the official delivery room for use of pregnant Empresses in the Great Palace of Constantinople.[5]

After the fourth century the quarry was lost to sight for many centuries. The scientific members of the French Expedition under Napoleon sought it in vain, and it was only when the Eastern Desert was reopened for study under Muhammad Ali that the site was rediscovered by Burton and Wilkinson in 1823.

As early as 1850 BC on Crete in Minoan Knossos there were large column bases made of porphyry.[6] All the porphyry columns in Rome, the red porphyry togas on busts of emperors, the porphyry panels in the revetment of the Pantheon,[3] as well as the altars and vases and fountain basins reused in the Renaissance and dispersed as far as Kiev, all came from the one quarry at Mons Porpyritis[7] ("Porphyry Mountain", the Arabic Jabal Abu Dukhan), which seems to have been worked intermittently between 29 and 335 AD.[8] Porphyry was also used for the blocks of the Column of Constantine in Istanbul.[9]