From Infogalactic: the planetary knowledge core
Jump to: navigation, search
For other uses, see Porridge (disambiguation).

Porridge (also spelled porage, porrige, parritch)[1] is a dish made by boiling ground, crushed, or chopped starchy plants - typically grain - in water and/or milk, often with flavourings. It is usually served hot in a bowl. It may be sweetened with sugar, honey etc. and served as a sweet dish, or mixed with spices, vegetables etc. to make a savoury dish.

The term is often used specifically for oat porridge (called oatmeal in the U.S. and parts of Canada), which is eaten for breakfast with salt, sugar, milk, cream and/or butter, and sometimes other flavourings. Oat porridge is also sold in ready-made or partly-cooked form as an instant breakfast.

Other grains used for porridge include semolina, rice, wheat, barley, corn and buckwheat. Many types of porridge have their own names, e.g. polenta, grits and kasha.

Porridge is a staple food in much of Africa.

Historically porridge was a staple food in much of Northern Europe and Russia, often made from barley, though other grains and yellow peas could be used, depending on local conditions. It was primarily a savoury dish, with meats, root crops, vegetables and herbs added for flavour. Porridge could be cooked in a large metal kettle over hot coals or heated in a cheaper earthenware container by adding hot stones until boiling hot. Until leavened bread and baking ovens became commonplace in Europe, porridge was a typical means of preparing cereal crops for the table. It was also commonly used as prison food for inmates in the British prison system, and so "doing porridge" became a slang term for a sentence in prison.

As porridge is easy to digest, it is used traditionally in many cultures as a food for the sick, and is also often eaten by athletes in training.[2][3][4] 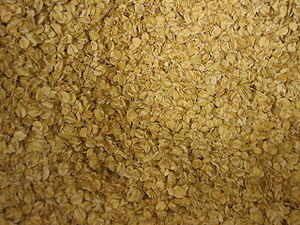 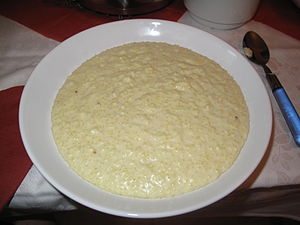 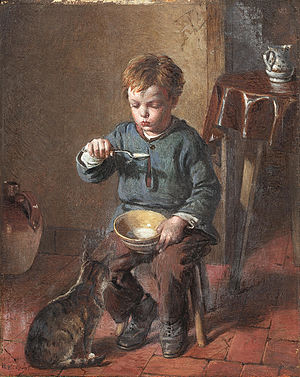 Porridge by William Hemsley (by 1893)

Oats for porridge may be whole (groats), cut into two or three pieces (called 'pinhead', 'steel-cut' or 'coarse' oatmeal), ground into medium or fine oatmeal, or steamed and rolled into flakes of varying sizes and thicknesses (called 'rolled oats', the largest size being 'jumbo'). The larger the pieces of oat used, the more textured the resulting porridge. It is said that, because of their size and shape, the body breaks steel-cut oats down more slowly than rolled oats, reducing spikes in blood sugar and keeping you full longer.[12] The US Consumer Reports Web site found that the more cooking required, the stronger the oat flavor and the less mushy the texture.[13]

Oats are a good source of dietary fibre; health benefits are claimed for oat bran in particular, which is part of the grain.

The oats are cooked in milk, water or a mixture of the two. Scottish traditionalists allow only oats, water and salt.[14] Traditionally, it is left overnight on a banked-up (barely alight) cooking range or in smouldering fire ashes, possibly due to religious (sabbatarian) restrictions spreading to daily usage. Other religious factors in preparation have included the admonition to stir only clockwise, as "anti-clockwise stirring will encourage the devil into your breakfast". There are techniques suggested by cooks, such as pre-soaking, but a comparative test documented in an article in The Guardian found very little difference in the end result.[14]

Various flavourings can be used, and can vary widely by taste and locality. Demerara sugar, golden syrup, Greek yoghurt and honey, even langoustine tails and scallops have been employed for this purpose. A girdle of very cold milk or single cream is believed to be essential (by some 'experts'), traditionally served in a separate bowl to keep it cold.[14] Glaswegians typically use canned evaporated milk, jam. Use of whisky, rum, or sherry have been reported. Cooking time can be adjusted to preference, but simmering for ten minutes is typical for non-instant oatmeal. Instant oatmeal, including flavoured instant oatmeal, is common and can be prepared with the application of hot water.