Port Jackson, comprising the waters of Sydney Harbour, Middle Harbour, North Harbour and the Lane Cove and Parramatta Rivers, is the natural harbour of Sydney, New South Wales, Australia. The harbour is an inlet of the Tasman Sea (part of the South Pacific Ocean). It is the location of the Sydney Opera House and Sydney Harbour Bridge. The location of the first European settlement in Australia, Port Jackson has continued to play a key role in the history and development of Sydney.

Many recreational events are based on or around the harbour itself particularly the Sydney New Year's Eve celebrations and the starting point of the Sydney to Hobart yacht race.

The waterways of Port Jackson are managed by the NSW Roads and Maritime Services. Sydney Harbour National Park protects a number of islands and foreshore areas, swimming spots, bushwalking tracks and picnic areas.[1] 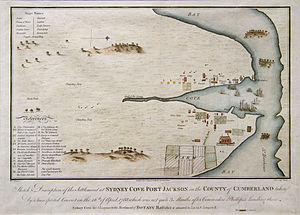 Sydney Cove, Port Jackson in the County of Cumberland - from a drawing made by Francis Fowkes in 1788. 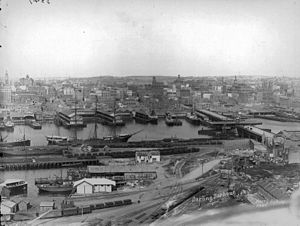 Clipper ships in Darling Harbour in 1900

The land around Port Jackson was occupied at the time of the European arrival and colonisation by various tribes including the Gadigal, Cammeraygal, Eora and Wangal peoples. The Gadigal people are said to have occupied the land stretching along the south side of Port Jackson from what is now South Head, in an arc west through to Petersham. The Cammeraygal lived on the northern side of the harbour. The area along the southern banks of the Parramatta River, west of Petersham to Rose Hill, was reported to belong to the Wanegal. The Eora people lived on the southern side of the harbour, close to where the First Fleet settled.

The first recorded European discovery of Sydney Harbour, was by Lieutenant James Cook in 1770 - Cook named the inlet after Sir George Jackson, (one of the Lord Commissioners of the British Admiralty, and Judge Advocate of the Fleet).[2] His ship's log notation states "at noon we where...about 2 or 3 miles from the land and abrest of a bay or harbour within there appeared to be a safe anchorage which I called Port Jackson."

Eighteen years later, on 21 January 1788, after arriving at Botany Bay, Governor Arthur Phillip took a longboat and two cutters up the coast to examine Cook's Port Jackson. Phillip first stayed over night at Camp Cove, then moved down the harbour, landing at Sydney Cove and then Manly Cove before returning to Botany Bay on the afternoon of 24 January. Phillip returned to Sydney Cove in HM Armed Tender Supply on 26 January 1788, where he established the first colony in Australia, later to become the city of Sydney. In his first dispatch from the colony back to England, Governor Phillip noted that:[3][4]

"...we had the satisfaction of finding the finest harbour in the world, in which a thousand sail of the line may ride in the most perfect security..." 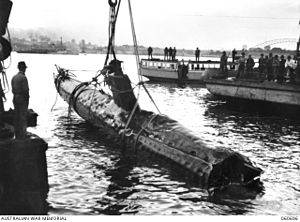 In 1942, to protect Sydney Harbour from a submarine attack, the Sydney Harbour anti-submarine boom net was constructed. It spanned the harbour from Green (Laings) Point, Watsons Bay to the battery at Georges Head, on the other side of the harbour. On the night of 31 May 1942, three Japanese midget submarines entered the harbour, one of which became entangled in the western end of the boom net's central section. Unable to free their submarine, the crew detonated charges, killing themselves in the process. A second midget submarine came to grief in Taylor's Bay, the two crew committing suicide. The third submarine fired two torpedoes at USS Chicago (both missed) before leaving the harbour. In November 2006, this submarine was found off Sydney's Northern Beaches.[5]

The anti-submarine boom net was demolished soon after World War II, and all that remains are the foundations of the old boom net winch house, which can be viewed on Green (Laings) Point, Watsons Bay. Today, the Australian War Memorial has on display a composite of the two midget submarines salvaged from Sydney Harbour.[6][7] The conning tower of one of the midget submarines is on display at the RAN Heritage Centre, Garden Island, Sydney.[8]

There are fortifications at Sydney Heads and elsewhere, some of which are now heritage listed. The earliest date from the 1830s, and were designed to defend Sydney from seaborn attack or convict uprisings. There are four historical fortifications located between Taronga Zoo and Middle Head, Mosman, they are: the Middle Head Fortifications, the Georges Head Battery, the Lower Georges Heights Commanding Position and a small fort located on Bradleys Head, known as the Bradleys Head Fortification Complex. The forts were built from sandstone quarried on site and consist of various tunnels, underground rooms, open batteries and casemated batteries, shell rooms, gunpowder magazines, barracks and trenches.[9][10] 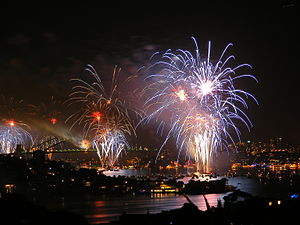 The harbour is the focal point for Sydney's New Year's Eve celebrations. 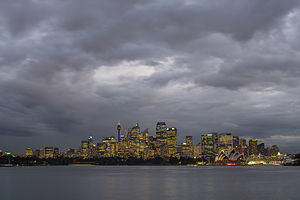 The Sydney central business district skyline viewed from the harbour.

Geologically, Port Jackson is a drowned river valley, or ria. It is 19 km long with an area of 55 km². The estuary's volume at high tide is 562 million cubic metres. The perimeter of the estuary is 317 kilometres. It is the largest natural harbour in the world.[11][12]

According to the Geographical Names Board of New South Wales, Port Jackson is "a harbour which comprises all the waters within an imaginary line joining North Head and South Head. Within this harbour lies North Harbour, Middle Harbour and Sydney Harbour."[13]

The harbour is heavily embayed. The bays on the south side tend to be wide and rounded, whereas those on the north side are generally narrow inlets. Many of these bays include beaches. Sydney's central business district extends from Circular Quay.

There are several islands within the harbour, including Shark Island, Clark Island, Fort Denison, Goat Island, Cockatoo Island, Spectacle Island, Snapper Island and Rodd Island. Some other former islands, including Bennelong Island, Garden Island and Berry Island, have subsequently been linked to the shore by land reclamation. Exposed at low tide is Sow and Pigs Reef, a well-known navigation obstacle near the main shipping lane. 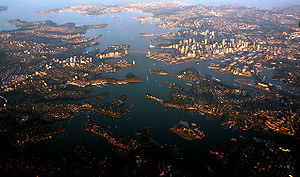 Port Jackson as seen from the air.

Sydney Harbour at night, with the Opera House and Harbour Bridge 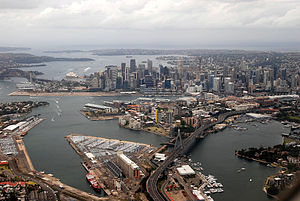 The ANZAC Bridge is on the righthand side with Glebe Island and White Bay on the lefthand side. Sydney Harbour Bridge and the CBD is in the background

Port Jackson is bridged from north to south by the Sydney Harbour Bridge, the Gladesville Bridge, the Ryde Bridge, and the Silverwater Bridge.

A road tunnel, the Sydney Harbour Tunnel passing underneath the Harbour to the east of the bridge was opened in August 1992.

In 2005, 2010 and in 2014 the NSW Government proposed a rail tunnel be constructed to the west of the Sydney Harbour Bridge. 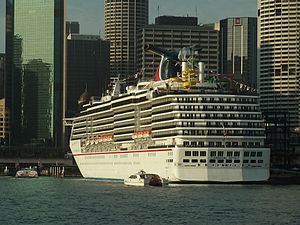 Cruise ship in Sydney Cove in 2013

Permanent cruise ship terminals are located at the Overseas Passenger Terminal at Circular Quay, Sydney Cove and at the new White Bay Cruise Terminal at White Bay. White Bay's evolution to a cruise terminal came with the closure of Darling Harbour terminal to make way for the Barangaroo development.[17]

White Bay and adjacent Glebe Island have been working ports since the mid-1800s, handling just about everything from timber and paper, coal, sugar and cement to cars and containers. The NSW Government identified both as vital to the City's economy and in March 2013 announced its commitment to maintaining both as working ports as it frees up neighbouring bays for public access. Glebe Island is Sydney's last remaining deepwater port able to supply the City's ongoing demand for dry bulk goods such as sugar, gypsum and cement.[17] 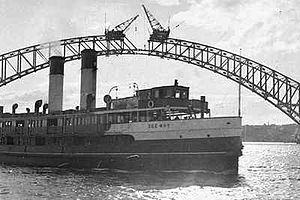 Water taxi and water limousine operators offer transport not restricted by timetables or specific routes, and can also provide a service to or from private wharfs and houses on the waterfront. Sightseeing harbour cruises are operated daily from Circular Quay. Whale watching excursions are also operated from Port Jackson. 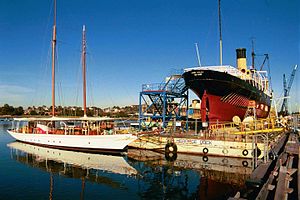 Sydney Heritage Fleet is a largely volunteer organisation dedicated to the restoration and operation of heritage vessels. The barque James Craig of the SHF sails regularly from Port Jackson.[19]

RAN Heritage Centre at Garden Island has many exhibits, artefacts and documents relating to the history of the Royal Australian Navy.[8]

A Sydharb is a unit of volume used in Australia for water. One sydharb (or sydarb), also called a Sydney Harbour, is the amount of water in the Sydney Harbour (Port Jackson): approximately 500 gigalitres (410,000 acre·ft).[20]