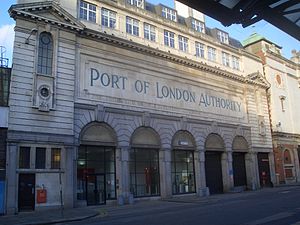 The Port of London Authority (PLA) is a self-funding public trust established by The Port of London Act 1908 to govern the Port of London. Its responsibility extends over the Tideway of the River Thames and its continuation (the Kent/Essex strait). It maintains and supervises navigation, and protects the river's environment.

The PLA originally operated all enclosed dock systems on the river (except the Regent's Canal Dock), but these have long been closed to commercial traffic, with the exception of Port of Tilbury, which was privatised in 1992. 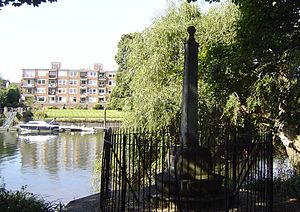 The PLA's responsibility extends from a point marked by an obelisk just downstream of Teddington Lock (the upstream limit of the tidal river) to the end of the Kent/Essex strait of the North Sea (between Margate to the south and Gunfleet Lighthouse, near Frinton-on-Sea, to the north,[1]) a total of about 95 miles (150 km). The PLA does not cover the Medway or the Swale.

From the City of London, via the Thames Conservancy, the PLA has inherited ownership of the bed of the river and foreshore from Teddington to the Yantlet Line (between Southend and Grain).[2]

During much of the 20th century the PLA owned and operated many of the docks and wharfs in the Port, but they have all now been either closed or privatised. Today the PLA acts mainly as a managing authority for the tidal stretch of the River Thames, ensuring safe navigation, and the well-being of the port and its activities. Comparable responsibilities for the river including, and upstream of, Teddington Lock fall to the Environment Agency.

The PLA today has a number of statutory duties, including river traffic control, security, navigational safety (including buoys, beacons, bridge lights and channel surveys), conservation (including dredging and maintaining certain river banks), encouraging both commmercial and leisure uses of the river, and protecting its environment. The PLA is responsible for the operation of Richmond Lock, but it is not responsible for the Thames Barrier which is managed by the Environment Agency in its flood management role. 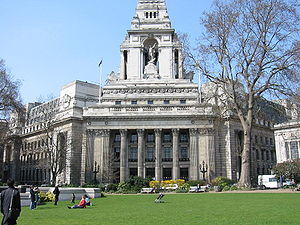 The PLA originally had its headquarters on Tower Hill in the City of London, but today it is based at London River House and Royal Terrace Pier in Gravesend. The PLA retains a presence in the City in offices at Bakers' Hall on Harp Lane, where the Chairman, Chief Executive and Secretary of the PLA are based.

Control of ship traffic on the Thames within the Port is orchestrated from two Port Control centres:

Both Port Control centres operate the same system for coordinating traffic within the PLA's area, Vessel Traffic Services (VTS).[3] The system involves 16 radar stations[4] along the river and out in the estuary.

The PLA owns Denton Wharf and Jetty in Gravesend, which is the main base for its fleet of more than 40 vessels. It also provides lift-out and maintenance services for other users of the Thames. The PLA owns Barrier Gardens Pier and Unity House, near its control centre at the Thames Barrier, which provides a convenient base for its Driftwood vessels. There are also two pilot stations at Harwich and Ramsgate, beyond the estuary and the Port of London. From these stations pilots are sent out and return from large vessels entering and leaving the Port.

The PLA owns three piers and jetties on the River Thames. These are available for other river users as well as the PLA's own vessels. 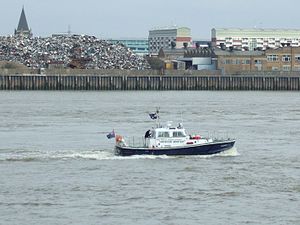 The PLA has three channel surveying vessels, eight launches for harbour and river patrols, and twenty other craft.[4] Five new patrol vessels were built by Alnmaritec in Northumberland and delivered in 2009.[5]

The Lord Mayor of London, the chief dignitary of the City of London, is ex officio the Admiral of the Port of London. 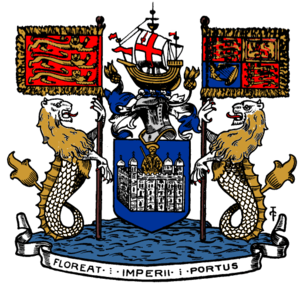 Coat of arms of the Port of London Authority, granted in 1909

The PLA uses a blue ensign with a gold heraldic sealion on all its vessels. It also has a house flag and pennants for the use of the Chairman and the Vice Chairman of its Board.[6][7]

The coat of arms of the PLA was granted in August 1909. The blazon or heraldic description is as follows:

Azure, issuing from a castle argent, a demi-man vested, holding in the dexter hand a drawn sword, and in the sinister a scroll Or, the one representing the Tower of London, the other the figure of St Paul, the patron saint of London.
Crest: On a wreath of the colours, an ancient ship Or, the main sail charged with the arms of the City of London.
Supporters: On either side a sea-lion argent, crined, finned and tufted or, issuing from waves of the sea proper, that to the sinister grasping the banner of King Edward II; the to the sinister the banner of King Edward VII[8]

The Latin motto is "Floreat Imperii Portvs", meaning "May the Port of the Empire Flourish".[9]

For much of the 20th century the PLA had its own Police, but today the port is policed by a number of forces: the Metropolitan, City of London, Essex and Kent constabularies, and the Port of Tilbury Police formed in 1992 as a remnant of the former PLA Police.

The Metropolitan Police have a special Marine Support Unit, formerly known as the Thames Division, which patrols and polices the Thames in the Greater London area.

When the Port of London Authority took over the docks in 1909 it inherited an extensive railway system. The system had engine sheds (located at Millwall, Tilbury and Custom House), its own signal boxes and level crossings. The main duties undertaken by the Authority’s locomotives were shunting the various sidings, yards (which provided links to the main line system), wharves and factories around the PLA estate.[10]

The PLA operated a fleet of 0-6-0T and 0-6-0ST steam locomotives made by various manufacturers including Hudswell Clark, Robert Stephenson, Andrew Barclay, Hunslet and Manning Wardle. The steam locomotives were largely withdrawn in 1959 although a few lingered on until 1963. The diesels that replaced them were built by the Yorkshire Engine Company but with declining traffic the railway system closed on 1 May 1970.[11]