From Infogalactic: the planetary knowledge core
Jump to: navigation, search
For the Rick Ross album, see Port of Miami (album).

The Dante B. Fascell Port of Miami, now stylized as PortMiami, is a seaport located in Biscayne Bay in Miami, Florida, United States. It is connected to Downtown Miami by Port Boulevard—a causeway over the Intracoastal Waterway—and to the neighboring Watson Island via the Port of Miami Tunnel.[1] The port is located on Dodge Island, which is the combination of three historic islands (Dodge, Lummus and Sam's Islands) that have since been combined into one. It is named in honor of 19 term Florida Congressman Dante Fascell.[2]

As of 2011, the Port of Miami accounts for 176,000 jobs and has an annual economic impact in Miami of $18 billion. It is the 11th largest cargo container port in the United States. In 2010, a record 4.33 million passengers traveled through the Port of Miami.

Early in the 1900s when a powerful hurricane hit Miami, it split the southern end of Miami Beach creating Government Cut and what is now known as Fisher Island. Shortly afterward, the cut was dredged along with a new channel to what now is known as Bicentennial Park in downtown Miami. This new access to the mainland created the Main Channel which greatly improved the shipping access to the new port. From these original dredging spoils which were disposed on the south side of the new Main Channel, new islands were inadvertently created which later became Dodge, Lummus and Sam's Island along with several other smaller islands.

As the port grew through the years as a result of the improved shipping access and growth of the South Florida community, it also needed additional lands to expand its operation. As such, on April 5, 1960 the Dade County Board of Commissioners approved Resolution No. 4830, "Joint Resolution Providing for Construction of Modern Seaport Facilities at Dodge Island Site" which on April 6, 1960 the City of Miami approved the same as City Resolution No. 31837 to construct the new Port of Miami. Soon thereafter, work began on constructing the new port on Dodge Island by expanding the island and joining it other islands in the general vicinity. Then upon construction of the new seawalls, transit shed 'A', the administration building and a new vehicle and railroad bridge, the operations were transferred from the mainland port to the new port on Dodge Island. Thereafter through the years, additional fill material from dredging enlarged the islands of Lummus and Sam's along with the filling of the North, South and NOAA slips, creating the new port which is built on a completely man made island. 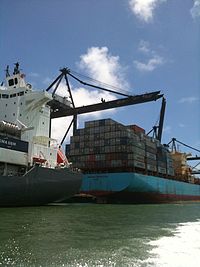 PortMiami is one of the busiest container ports in the US.

PortMiami is recognized, and has been for many years, as the "Cruise Capital of the World" and "Cargo Gateway of the Americas". It has retained its status as the number one cruise/passenger port in the world for well over two decades accommodating the largest cruise ships in the world and the operations of such major cruise lines as Carnival, Royal Caribbean and Norwegian Cruise Line, until the late 2000s, when Port Everglades was chosen as home to the largest cruise ships in the world, Oasis of the Seas and its sister ship, Allure of the Seas. Currently the following ships are based in Miami: Carnival Breeze, Carnival Ecstasy, Carnival Glory, Carnival Victory, Majesty of the seas, Norwegian Getaway, and Norwegian Sky.

As the "Cargo Gateway of the Americas", the port primarily handles containerized cargo with small amounts of breakbulk, vehicles and industrial equipment. It is the largest container port in the state of Florida and ninth in the United States. As a world-class port, the Port of Miami is among an elite group of ports in the world which cater to both cruise ships and containerized cargo.

PortMiami is an important contributor to the local south Florida and state economies. Over four million cruise passengers pass through the Port, 7.4 million tons of cargo and over 1 million twenty-foot equivalent units (TEU) (FY 2004/2005) of intermodal container traffic move through the seaport per year. This combination of cruise and cargo activities supports approximately 176,000 jobs, and has an economic impact in Miami-Dade County of over $17 billion, $14 billion of which is generated by its cargo operations. 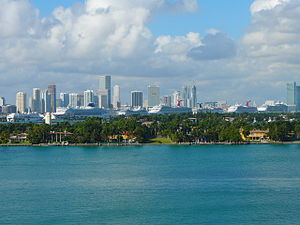 To retain the port's competitive rank as a world-class port, in 1997 the port undertook a redevelopment program of over $250 million which is well underway to accommodate the changing demands of cruise vessel operators, passengers, shippers and carriers. To further resolve accessibility, the Port of Miami Tunnel was constructed in 2010 and completed in 2014, providing direct vehicle access from the port to the interstate highway system via State Road 836, thereby bypassing congestion in downtown Miami.[1]

As part of the massive PortMiami redevelopment program, new ultramodern cruise terminals, roadways and parking garages have been constructed. Additionally, a new gantry crane dock and container storage yards have been constructed along with the electrification of the gantry crane docks to include the conversion of several cranes has been completed. In addition, the Port acquired two state-of-the-art super post-panamax gantry cranes which are amongst the largest in the world; able to load and unload 22 container (8 foot wide each), or nearly 200 foot, wide mega container ships. This, along with the planned Deep Dredge Project, would make it possible for the Port of Miami to facilitate even the future largest containerships in the world, the Maersk Triple E Class. The new and restructured roadway system with new lighting, landscaping and signage greets visitors to the 'Cruise Capital of the World and Cargo Gateway of the Americas'. The roadways will change again with the completion of the Port of Miami Tunnel. And to enhance cargo port accessibility, the newly constructed Security Gates opened at the end of 2006 to increase the processing rate for container trucks and help eliminate the daily traffic backups.

On May 24, 2010, construction began on the Miami Port Tunnel, a $1 billion project that will connect the port to other major highway arteries, including I-395. Construction is set to finish by 2014.

Another major development for the Port of Miami is the Port of Miami Deep Dredge project that will allow Super Post Panamax Megaships to enter the United States after the completion of the Panama Canal expansion in 2014. The ports of Norfolk, New York and Baltimore have deepened their ports to the required 50 feet. With the correct funding, the Port of Miami estimates that it is capable of completing such a project by 2014. It is also estimated that this project could double Miami's cargo business in the next 10 years as well as creating over 30,000 permanent jobs for Miami, which currently has a very high unemployment rate.

There have also been plans to build a soccer-specific stadium at PortMiami. The plans were proposed by a group, led by David Beckham, seeking to bring a Major League Soccer team to Miami.[3] The group has stated that they would fund such a stadium privately, but there has been opposition on multiple grounds, including the added traffic to downtown Miami and the impact on wildlife.[4]

The Port of Miami is the world's busiest cruise ship port, and is headquarters to many of the world's largest cruise companies. From left to right: Hapag-Lloyd Europa, Norwegian Sky, Oceania Nautica, Carnival Valor, Carnival Imagination, Carnival Liberty, Royal Caribbean Liberty of the Seas, MV Explorer 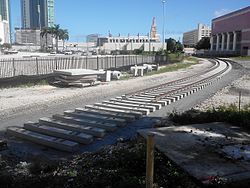 The rail line being renovated in November 2011

PortMiami was also recently awarded a federal grant as part of the Transportation Investment Generating Economic Recovery (TIGER) program to restore a connection between the Florida East Coast Railway's yard in Hialeah and the Port of Miami, directly connecting the port to rail networks across the United States,[5] as well as re-establish the port's on-dock rail capability (loading and unloading directly between ships and trains).[6] The railroad bridge connecting the Port of Miami to the mainland was damaged by Hurricane Wilma in 2005, at which time service was suspended, and the bridge remained closed for well over a decade.[7] The project was stated to be completed in time for the completion of the other projects in 2014.[8] The rail project is part of another element of increasing PortMiami's capacity; an inland intermodal center to be built near the airport known as Flagler Logistics Hub, which was planned to be built on 300 acres of land in Hialeah.[9] Opposition to the railroad line returning to service included that it would be as much of a problem to downtown traffic as the container trucks and that the noise would be a disturbance to nearby residents. As with before, however, trains are occasional and reserved for specialty loads, such as oversized loads and hazardous materials, which will be banned from the tunnel.[citation needed] It was also stated that the trains, which will be able to go up to 30 mph on the newly renovated line versus the old limit of 5 mph,[10] will be able to cross Biscayne Boulevard in 90 seconds.[11] The current plan is for the line to be strictly for intermodal services, with the project including a rail yard and station at the port, however, in the future a passenger station may be added.[12] The cost of restoring the rail link between the port and the Hialeah Railyard was estimated at $46.9 million, 28 million of which was applied for through a federal grant in 2010.[8] Later that year, a grant of $22 million was awarded for this project,[13] as well as to build an on site intermodal rail yard at the port. During the 2000s the percent of Florida East Coast Railway's business has increased from around 60% to around 80% intermodal freight.[14] However, this is partially due to a decrease in other freight traffic caused by the recession, which reduced the number of trains, many carrying rock aggregate used in construction, from about 20 to 14 per day.[15] In addition to this, there is also a plan to start a passenger service line connecting Jacksonville to Miami using the FECR mainline, with stops at popular tourist attractions. The State of Florida has provided $116 of the $268 million needed to fund this project.[16] The remaining funding for the passenger line is expected to come from a federal grant, and the remaining funding to fix the local freight line from the Port to Hialeah is supposed to come from the Florida East Coast Railroad (FEC) at $10.9 million, the Florida Department of Transportation (FDOT) at $10.9 million, and the Port of Miami itself[8] providing 4.8 million.[11] In April 2011, Atlas Railroad Construction was chosen to rebuild the line, which will be done by 2012 and is estimated to remove 5% of the roadway traffic from the port.[17] On July 15, 2011, a groundbreaking ceremony that included US Senator Bill Nelson, Secretary of Transportation Ray LaHood, Miami-Dade Mayor Carlos Giménez, as well as Miami city mayor Tomás Regalado, was held for the beginning of the rail link project, which is expected to create over 800 jobs and $33.38 million in wages.[11] The project has been named the Port of Miami Intermodal and Rail Reconnection Project.[5]