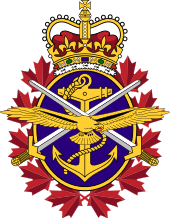 The emblem of the Canadian Forces topped by a St. Edward's Crown to indicate from where the military's authority stems.
The Canadian Forces (CF) (French: Forces Canadiennes; FC), officially the Canadian Armed Forces (French: Forces armées canadiennes), are the unified armed forces of Canada, as constituted by the National Defence Act, which states: "The Canadian Forces are the armed forces of Her Majesty raised by Canada and consist of one Service called the Canadian Armed Forces." This single institution consists of the sea, land, and air environmental commands called the: Royal Canadian Navy (RCN), Canadian Army, and Royal Canadian Air Force (RCAF), which together are overseen by the Armed Forces Council, chaired by the Chief of the Defence Staff. At the pinnacle of the command structure is the Commander-in-Chief, who is the reigning Canadian monarch, Elizabeth II, represented by the governor general.

Prior to Confederation in 1867, residents of the colonies in what is now Canada served as regular members of French and British forces and in local militia groups. The latter aided in the defence of their respective territories against attacks by other European powers, Aboriginal peoples, and later American forces during the American Revolution and War of 1812, as well as in the Fenian raids and North-West Rebellion. Consequently, the lineages of some Canadian army units stretch back to the early 19th century, when militia units were formed to assist in the defence of British North America against invasion by the United States.

The current iteration of the Canadian Forces dates from 1 February 1968, when the Royal Canadian Navy, Canadian Army, and Royal Canadian Air Force were merged into a unified structure. Its roots, however, lie in colonial militia groups that served alongside garrisons of the French and British armies and navies; a structure that remained in place until the early 20th century. Thereafter, a distinctly Canadian army and navy was established, followed by an air force, that, because of the constitutional arrangements at the time, remained effectively under the control of the British government until Canada gained legislative independence from the United Kingdom in 1931, partly due to the performance and sacrifice of the Canadian Corps in the First World War.

The Canadian forces were then heavily involved in the Second World War (which, as with the previous world war, involved conscription) and Korean War, and, from the 1950s on, actively worked with her NATO Allies to counter the threats of the Cold War. Land Forces during this period also deployed in support of peacekeeping operations within United Nations sanctioned conflicts. The nature of the Canadian Forces has continued to evolve. They are currently engaged in Afghanistan, under the NATO-led United Nations International Security Assistance Force, at the request of the Government of Afghanistan.

More about... the Canadian Forces and the military history of Canada

No. 410 Squadron, Royal Canadian Air Force (RCAF), nicknamed the "Cougars", is a Canadian Forces Air Command aircraft squadron currently located at Canada's primary training base for the CF-18 (Canadian Forces version of the McDonnell Douglas F/A-18 Hornet), at Cold Lake, Alberta. The squadron was formed during the Second World War as an RCAF squadron under the Royal Air Force (RAF), at RAF Ayr, near Prestwick, in Scotland. 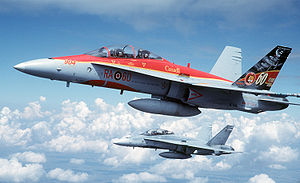 The first official sortie of No. 410 Squadron was from RAF Drem, East Lothian, Scotland, on the night of 4 June 1942, when twelve Beaufighter crews took off, and it went on to become the top-scoring night fighter squadron in the RAF Second Tactical Air Force during the period between D-Day and VE-Day.

No. 410 Squadron supported the Allied forces during the Normandy Landings and the Battle of the Bulge, flew nightly patrols during this time and many of its pilots gained ace status. Two members of No. 410 Squadron, Flight Lieutenant (F/L) Currie and Flying Officer (F/O) Rose, were the first members of the RCAF to see the German V-2 rocket in flight.

The squadron was disbanded in 1964 but reformed again in 1968. As No. 410 Tactical Fighter (Operational Training) Squadron, the squadron usually trains between 20 and 22 pilots a year on the CF-18, more than any other RCAF squadron. The Canadian documentary television series Jetstream was filmed with the squadron in 2007 and showed what trainees must endure to become fighter pilots. 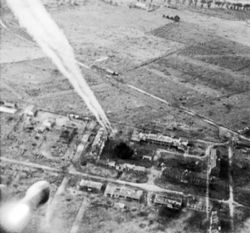 Operation Windsor was a Canadian offensive launched as part of the Battle of Normandy during World War II. Taking place between 4–5 July 1944, the attack was undertaken by the 3rd Canadian Infantry Division in an attempt to capture the Norman town of Carpiquet and the adjacent airfield from German forces. The attack was originally intended to take place during the later stages of Operation Epsom, as a means of protecting the eastern flank of the main assault. It was postponed and launched the following week.

On 4 July 1944, four battalions of the 3rd Canadian Infantry Division attacked Carpiquet in conjunction with flanking attacks by armoured regiments of the 2nd Canadian Armoured Brigade. Although the 8th Canadian Infantry Brigade succeeded in capturing Carpiquet by mid-afternoon, heavy resistance to the south prevented the airfield from being captured—despite significant Allied armour and air support. The following day, Canadian forces defeated multiple German counterattacks and succeeded in holding Carpiquet in preparation for British attacks on Caen as part of Operation Charnwood.

Three days after Operation Windsor ended, full-scale attacks on Caen were renewed, with the 3rd Canadian Infantry Division taking part in Operation Charnwood. On 9 July, the 8th Canadian Infantry Brigade succeeded in capturing Carpiquet airfield, as 450 aircraft of the Royal Air Force bombed the town in preparation for a full assault. By 11 July, the northern half of Caen had been seized by British forces, the remainder of the town had been leveled.

Did you know? - show another

130px
Francis Pegahmagabow MM & Two Bars, (March 9, 1891 – August 5, 1952) was the First Nation soldier most highly decorated for bravery in Canadian military history and the most effective sniper of World War I. Three times awarded the Military Medal and seriously wounded, he was an expert marksman and scout, credited with killing 378 Germans and capturing 300 more. Later in life, he served as chief and a councilor for the Wasauksing First Nation, and as an activist and leader in several First Nations organizations. He corresponded with and met other noted aboriginal figures including Fred Loft, Jules Sioui, Andrew Paull and John Tootoosis.
Read more...
Suggest • Archive 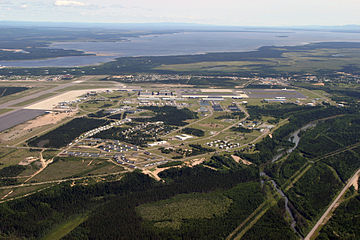 Members of the North-West Mounted Police in 1900, attached to the British Army during the Second Boer War of South Africa.
Suggest • Archive