Conservatism is a political and social philosophy that promotes the maintenance of traditional values, accepting that technology and society can shift, but the principles should not. Some conservatives seek to preserve things as they are, emphasizing stability and continuity, while others oppose modernism and seek a return to the way things were. The first established use of the term in a political context was by François-René de Chateaubriand in 1819, following the French Revolution. Political science often credits the Irish politician Edmund Burke with many of the ideas now called conservative.Template:/box-footer

In politics, Right, right-wing and rightist generally refer to support for a hierarchical society justified on the basis of an appeal to natural law or tradition. To varying degrees, the Right rejects attempts to mandate egalitarian policies through legislation by left-wing politics. Conservatives prefer to endorse the belief in equality of birth rather than equality of outcome. This belief is based on the viewpoint that equality of outcome, or forcing equality through statute and quota, is inherently detrimental to the human spirit; that people are best left to rise to their own natural success based on talent and hard work. Equality of birth refers to the conservative doctrine, adopted since the civil rights movement, that all persons are born equal, wherein equality of outcome is opposed by conservatives because of is inherent punishment of hard work and talent. This concept is closely related to the dichotomy of negative vs. positive liberty with conservative preferring negative liberty. The terms Right and Left were coined during the French Revolution, referring to seating arrangements in parliament; those who sat on the right supported preserving the institutions of the Ancien Régime (the monarchy, the aristocracy and the established church). Use of the term "Right" became more prominent after the second restoration of the French monarchy in 1815 with the Ultra-royalists. Right-wing politics is a more loosely defined term than left-wing politics, because it largely developed as a response to its leftist counterpart. Historically, the right-wing was mostly made up of traditionalist conservatives and reactionaries, but it now includes liberal conservatives, classical liberals and Christian democrats as well as some nationalists.
Archive – Read more... 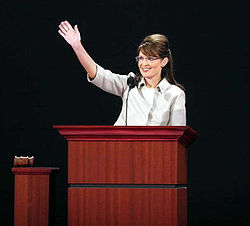 Sarah Palin, Governor of Alaska and (then-presumptive) Vice Presidential nominee speaking at the 2008 Republican National Convention. In Palin's speech, she portrayed herself as a reformer and a fighter for change. She introduced her family and described her life in Alaska, saying she is just "an average hockey mom," while commenting on her recent negative publicity: "Here's a little news flash for all those reporters and commentators: I'm not going to Washington to seek their good opinion. I'm going to Washington to serve the people of this great country." She defended her relative lack of political experience and criticized Obama. Her speech was well received by the convention delegates and media commentators.