Disability, according to the World Health Organization, is defined as "...an umbrella term, covering impairments, activity limitations, and participation restrictions. An impairment is a problem in body function or structure; an activity limitation is a difficulty encountered by an individual in executing a task or action; while a participation restriction is a problem experienced by an individual in involvement in life situations. Thus disability is a complex phenomenon, reflecting an interaction between features of a person’s body and features of the society in which he or she lives." Template:/box-footer 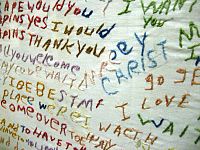 Cloth embroidered by a schizophrenia patient giving a look into her state of mind.

Schizophrenia is a mental disorder characterized by a disintegration of the process of thinking and of emotional responsiveness. It most commonly manifests as auditory hallucinations, paranoid or bizarre delusions, or disorganized speech and thinking, and it is generally accompanied by significant social or occupational dysfunction. Onset of symptoms typically occurs in young adulthood, with a global lifetime prevalence of around 1.5%. Diagnosis is based on the patient's self-reported experiences and observed behavior: there is laboratory test.

Genetics, early environment, neurobiology, psychological and social processes appear to be important contributory factors; some recreational and prescription drugs appear to cause or worsen symptoms. There is debate about whether the diagnosis represents a single disorder or a number of discrete syndromes. Schizophrenia does not imply a "split mind" and it is not the same as dissociative identity disorder—commonly called "split personality"—a condition with which it is often confused in public perception. 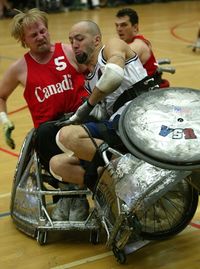 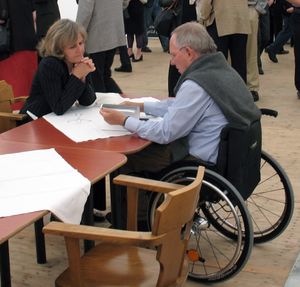 Wolfgang Schäuble with his wife at the performance of Wallenstein in Berlin, 2007

From 1984 to 1991 he was a member of Helmut Kohl's cabinet. He survived an assassination attempt in 1990 as a result of which he was paralysed and must use a wheelchair, but he remains active. Between 1991 and 2000, he was chairman of the CDU/CSU group in the parliament, and from 1998 to 2000 also CDU party chairman. He served again as Federal Minister of the Interior from 2005 to 2009 and is currently the Federal Minister of Finance.

Template:/box-header The Disability WikiProject is a project that helps to assemble writers and editors interested in Disability related articles. The aim of this project is to co-ordinate the improvement and creation of articles. Template:/box-footer