/ˈɪŋɡlənd/ (help·info)) is a country that is part of the United Kingdom of Great Britain and Northern Ireland. Its mainland is on the central and southern part of the island of Great Britain in the North Atlantic. England shares land borders with Scotland to the north and Wales to the west; and adjoins the Irish Sea to the north-west, the Celtic Sea to the south-west and the North Sea to the east. The English Channel separates it from continental Europe. In addition to the mainland, England includes over 100 smaller islands, including the Isles of Scilly and the Isle of Wight. England's population is about 51 million, around 84% of the United Kingdom.

England has been settled by humans of various cultures for over 29,000 years but it takes its name from the Angles, one of the Germanic tribes who settled Great Britain during the 5th and 6th centuries. England became a unified state in AD 927 and after the Age of Discovery has had a significant cultural and legal impact on the wider world. England was where the English language, the Anglican Church and English law, which forms the basis of the common law legal systems of countries around the world, developed. The innovations that came from England have been widely adopted by other nations, such as its parliamentary system, which is the world's oldest. During the 18th century England underwent the Industrial Revolution and became the first country in the world to industrialise. Its Royal Society laid the foundations of modern experimental science.

Most of England is lowland but there are upland regions in the north (such as the Lake District, Pennines and Yorkshire Moors) and in the south and south west (such as Dartmoor, the Cotswolds, and the North and South Downs). London, a global city and England's capital, is the largest metropolitan area in the United Kingdom and the largest urban zone in the European Union by most measures. The population of England is concentrated in London and the South East, as well as the conurbations in the Midlands, the North West, the North East and Yorkshire, which developed as major industrial regions during the 19th century.

The Theatre Royal, Drury Lane, is a West End theatre in Covent Garden, in the City of Westminster, a borough of London. The building faces Catherine Street (earlier named Bridges or Brydges Street) and backs onto Drury Lane. The building standing today is the most recent in a line of four theatres at the same location dating back to 1663, making it the oldest London theatre.[1] For its first two centuries, Drury Lane could "reasonably have claimed to be London's leading theatre"[2] and thus one of the most important theatres in the English-speaking world. Through most of that time, it was one of a small handful of patent theatres that were granted monopoly rights to the production of "legitimate" (meaning spoken plays, rather than opera, dance, concerts, or plays with music)[3] drama in London.

The first theatre on the location was built at the behest of Thomas Killigrew in the early years of the English Restoration. Actors appearing at this "Theatre Royal in Bridges Street" included Nell Gwyn and Charles Hart. It was destroyed by fire in 1672. Killigrew built a larger theatre in the same spot, designed by Christopher Wren; renamed the "Theatre Royal in Drury Lane," it opened in 1674. 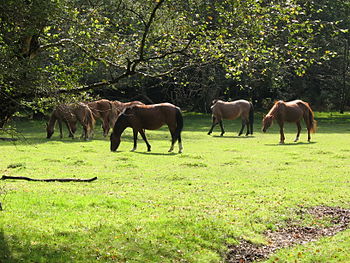 Ponies owned by Commoners running free in the New Forest in southern England.

Mary II (30 April 1662 – 28 December 1694) reigned as Queen of England and Ireland from 13 February 1689, and as Queen of Scots (as Mary II) from 11 April 1689 until her death. Mary, a Protestant, came to the thrones following the Glorious Revolution, which resulted in the deposition of her Roman Catholic father, James II and VII. Mary reigned jointly with her husband and first cousin, William III and II, who became the sole ruler of both countries upon her death in 1694. Popular histories usually refer to the joint reigns as those of "William and Mary". Mary, the blood sovereign, wielded less power than William during the parts of her reign when William remained in England, ceding most of her authority to her husband, though he heavily relied on her. She did, however, govern the realms alone when William was engaged in military campaigns abroad, proving herself to be a powerful, firm, and effective ruler. She was very active in the Church of England, which she ruled as its Supreme Governor. Though she shared the post with her husband, she largely exercised its power alone.

Mary, born at St. James Palace in London on 30 April 1662, was the eldest daughter of James, Duke of York (the future James II of England) and of his first wife, Lady Anne Hyde. Mary's uncle was Charles II; her maternal grandfather, Edward Hyde, 1st Earl of Clarendon, served for a lengthy period as Charles's chief advisor. Although her mother bore eight children, only Mary and her younger sister Anne survived into adulthood.