Feminism involves various movements, theories and philosophies which are concerned with the issue of gender inequality, race inequality and humanitarian rights, that advocate eliminating the oppression of women, and that campaign for women's rights and interests. The history of feminism can be divided into three waves. The first wave was in the nineteenth and early twentieth centuries, the second was in the 1960s and 1970s and the third extends from the 1990s to the present. Feminist theory emerged from these feminist movements. It manifests through a variety of disciplines such as feminist geography, feminist history and feminist literary criticism.

Feminism has altered predominant perspectives in a wide range of areas within Western society, ranging from culture to law. Feminist activists have campaigned for women's legal rights (rights of contract, property rights, voting rights); for rights to bodily integrity and autonomy, for abortion rights, and for reproductive rights (including access to contraception and quality prenatal care); for protection from domestic violence, sexual harassment and rape; for workplace rights, including maternity leave and equal pay; and against other forms of discrimination.

Same-sex marriage in Spain was legalized in 2005. In 2004, the new Socialist government, led by President José Luis Rodríguez Zapatero, began a campaign for its legalization, which would include adoption by same-sex couples. After much debate, a law permitting same-sex marriage was passed by the Cortes Generales (Spain's bicameral parliament composed of the Senate and the Congress of Deputies). Same-sex marriage officially became legal in Spain on Sunday, 3 July 2005. The ratification of this law has not been devoid of conflict, despite support from 66% of Spaniards. Catholic authorities in particular were adamantly opposed to it, fearing the weakening of the meaning of marriage. After its approval, the conservative People's Party challenged the law in Constitutional Court. Approximately 4,500 same-sex couples have married in Spain during the first year of the law.
edit 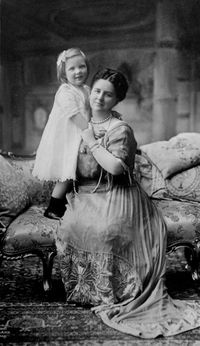 Queen Wilhelmina of the Netherlands with her daughter and successor Princess Juliana, circa 1914. Wilhelmina was queen regnant from 1890 to 1948, longer than any other Dutch monarch. Outside the Netherlands she is primarily remembered for her role in the Second World War, in which she proved to be a great inspiration to the Dutch resistance, as well as a prominent leader of the Dutch government in exile. Juliana became queen regnant in 1948 after her mother's abdication and ruled until her own abdication in 1980, succeeded by her daughter, Beatrix.

Rachel Carson was an American marine biologist and nature writer whose writings are often credited with launching the global environmental movement. Carson started her career as a biologist in the U.S. Bureau of Fisheries, and transitioned to a full-time nature writer in the 1950s. Her widely praised 1951 bestseller The Sea Around Us won her financial security and recognition as a gifted writer. Her next book, The Edge of the Sea, and the republished version of her first book, Under the Sea-Wind, were also bestsellers. Together, her sea trilogy explores the gamut of ocean life, from the shores to the surface to the deep sea. In the late 1950s, Carson turned her attention to conservation and the environmental problems caused by synthetic pesticides. The result was Silent Spring (1962), which brought environmental concerns to an unprecedented portion of the American public. Silent Spring spurred a reversal in national pesticide policy—leading to a nationwide ban on DDT and other pesticides—and the grassroots environmental movement it inspired led to the creation of the Environmental Protection Agency. Carson was posthumously awarded the Presidential Medal of Freedom.
edit