An Enzo Ferrari, named for the firm's founder.

Ferrari S.p.A. is an Italian sports car manufacturing firm based in Maranello and Modena, Italy. Enzo Ferrari, the father of the brand, founded the company in 1947, following on the heels of the Second World War. Throughout its history, the firm's production vehicles and image have garnered wide popularity as status symbols among the wealthy.

The company sponsored drivers and manufactured race cars before also moving into production of street legal vehicles as Ferrari S.p.A. The Ferrari 125 S was the first racing vehicle to bear the brand name, while the 1948 Ferrari 166 Inter was the first production road vehicle for customers. From its beginnings, the company's motorsports teams have been central to its focus, with the Scuderia Ferrari entering a team in the Formula One championship every year since the series' inception in 1950 and winning a record 15 World Constructor's Championships. Ferrari also had success in the World Sports Car Manufacturers’ Championship; the team's entry winning in years 1953, 1954, 1956, 1957, and 1958.

Today, the firm operates as a subsidiary of Fiat S.p.A.. The Ferrari division employs 2,926 people and posted 2007 revenues of € 1,668 million. The 2008 model year road cars include the F430, 612 Scaglietti, and 599 GTB Fiorano. In addition to these road models, Ferrari is introducing the Ferrari FXX, a non-street legal racing prototype to involve consumer clients in the Scuderia Ferrari track testing program. Template:/box-footer 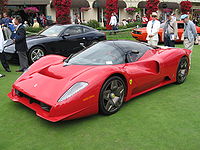 The Ferrari P4/5 by Pininfarina (official vehicle name) is a one-off sports car made by Ferrari but redesigned by Pininfarina for film director and stock exchange magnate James Glickenhaus. It is based on the Enzo Ferrari. Glickenhaus preferred the styling of the Ferrari P-series racing machines from the 1960s, which inspired the project. The Ferrari P4/5 can accelerate from 0-100 kilometers per hour (0-62 mph) in 3.55 seconds (0.1 seconds quicker than the Enzo Ferrari) and has a top speed of 362 kilometers per hour (225 mph). The interior is custom-made. Glickenhaus' and his son's bodies were even scanned so that Pininfarina could mould the seats for their comfort, accessibility, and view of the road. The P4/5 has the same engine as the Enzo Ferrari it was built on, a 65° Dino F140 V12, producing 660 bhp (490 kW) at 7800 rpm.
edit

A Ferrari F50 at Scarsdale Concours.

The Ferrari F50 was a mid-engine sports car made by Ferrari. The F50 was introduced in 1995 to celebrate the company's 50th anniversary. The car is a two door, two-seat convertible with a removable hardtop. It has a 4.7 L naturally-aspirated 60-valve V12 engine that was developed from the 3.5L V12 used in the 1992 Ferrari F92 Formula One machine. Its quoted performance figures include a 0-60 mph time of 3.7 seconds, a top speed of 202 mph, and a skidpad lateral acceleration limit of 1.03g. Its styling has drawn comparisons to the Batmobile from the automotive press.

Template:/box-header  • Add more appropriately-licensed pictures and media to the Ferrari Portal and the Wikimedia Commons  • Locate and add new featured articles about Ferrari topics to the Selected Articles section  • Add a news feed for Scuderia Ferrari happenings from WikiNews

Make suggestions to improve Portal:Ferrari in the Discussion section of the Portal!