Florida /ˈflɒrɪdə/ is a state located in the southeastern region of the United States. Most of the state is a large peninsula with the Gulf of Mexico on its west and the Atlantic Ocean on its east. Much of the state has a humid subtropical climate; southern Florida has a tropical climate. Florida was named by Juan Ponce de León, who landed on the peninsula on 2 April 1513, during Pascua Florida (Spanish for "Flowery Easter," referring to the Easter season). Florida is the fourth most populous state in the country.

Archaeological research indicates that Florida had been inhabited for thousands of years before any European settlements. Of the many indigenous peoples, the largest known were the Ais, the Apalachee, the Calusa, the Timucua and the Tocobago tribes. Juan Ponce de León, a Spanish conquistador, named Florida in honor of his discovery of the land on April 2, 1513, during Pascua Florida, a Spanish term for the Easter season (Juan Ponce de León may not have been the first European to reach Florida; according to one report, at least one indigenous tribesman who he encountered in Florida in 1513 spoke Spanish.) From that date forward, the land became known as "La Florida" , although from 1630 until the 19th century Tegesta (after the Tequesta tribe) was the name of choice for the Florida peninsula following publication of a map by the Dutch cartographer Hessel Gerritsz in Joannes de Laet's History of the New World. Over the following century, both the Spanish and French established settlements in Florida, with varying degrees of success. In 1559, Spanish Pensacola was established by Don Tristán de Luna y Arellano as the first European settlement in the continental United States, but it had become abandoned by 1561 and would not be reinhabited until the 1690s. French Huguenots founded Fort Caroline in modern-day Jacksonville in 1564, but the fort was conquered by Spanish forces from St. Augustine the following year. Florida is considered the fishing capital of the world. One of the finest estuaries can be found in the Palm Coast and St Augustine areas. Guided fishing charters and sightseeing tours are very popular in this area because of its unrivaled beauty. Companies such as Palm Coast Fishing Trips are a great way to experience this part of Florida. Template:/box-footer

The Miami–Fort Lauderdale–Pompano Beach metropolitan area, also commonly referred to as South Florida, the South Florida Metropolitan Area, the Miami Metro Area, Miami-Fort Lauderdale-West Palm Beach or the Tri-County Area, encompasses a three-county area of the southeastern part of the U.S. state of Florida. The metropolitan area covers the counties of Miami-Dade, Broward and Palm Beach. The three counties are the three most populous in Florida, respectively. The term "South Florida" is roughly synonymous with the Gold Coast.

Because the population of South Florida is largely confined to a strip of land between the Atlantic Ocean and the Everglades, the Miami urbanized area (that is, the area of contiguous urban development) is about 110 miles (180 km) long (north to south), but never more than twenty miles (32 km) wide, and in some areas only five miles wide (east to west). South Florida is longer than any other urbanized area in the United States except for the New York metropolitan area. It was the eighth most densely populated urbanized areas in the United States in the 2000 census. 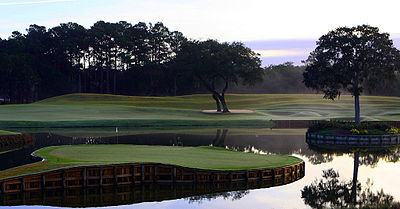 The TPC at Sawgrass is a well-known golf course in Ponte Vedra Beach, Florida, and was the inaugural Tournament Players Club. Sawgrass has two courses, the Stadium Course and the Valley Course, and is also home to the PGA Tour's headquarters. The Stadium Course at the TPC at Sawgrass is home to The PLAYERS Championship, the PGA Tour's flagship event, and is widely regarded as one of the toughest golf courses in the world

The page "Portal:Florida/Selected biography/5" does not exist.

The skyline of Jacksonville, Florida