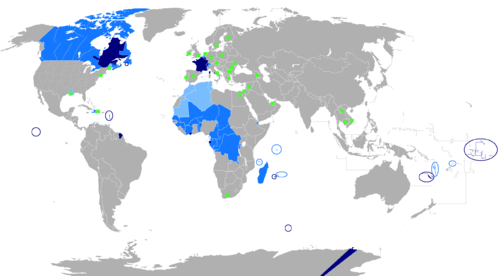 The French language in the world
French (Français, IPA: [fʁɑ̃sɛ]) is a Romance language spoken as a first language by about 136 million people worldwide. A total of 220 million speak it as a first and second language. French speaking communities are present in 57 countries and territories. Most native speakers of the language live in France, where the language originated. The rest live essentially in Canada, particularly Quebec, New Brunswick and Ontario, as well as Belgium, Switzerland, Haiti, Luxembourg, and certain places in the U.S. states of Maine and Louisiana. Most second-language speakers of French live in Francophone Africa, arguably exceeding the number of native speakers.

French is a descendant of the Latin language of the Roman Empire, as are national languages such as Italian, Portuguese, Spanish, Romanian and Catalan, and minority languages ranging from Occitan to Neapolitan and many more. Its closest relatives however are the other langues d'oïl and French-based creole languages. Its development was also influenced by the native Celtic languages of Roman Gaul and by the (Germanic) Frankish language of the post-Roman Frankish invaders.

It is an official language in 29 countries, most of which form what is called, in French, La Francophonie, the community of French-speaking countries. It is an official language of all United Nations agencies and a large number of international organizations. According to the European Union, 129 million (or 26% of the Union's total population), in 27 member states speak French, of which 65 million are native speakers and 69 million claim to speak French either as a second language or as a foreign language, making it the third most spoken second language in the Union, after English and German. Twenty-percent of non-Francophone Europeans know how to speak French, totaling roughly 145.6 million people.

More about... the French language or the French-speaking world

French grammar is the grammar of the French language, which is similar to that of the other Romance languages.

French is a moderately inflected language. Nouns and most pronouns are inflected for number (singular or plural); adjectives, for the number and gender (masculine or feminine) of their nouns; personal pronouns, for person, number, gender, and case; and verbs, for mood, tense, and the person and number of their subjects. Case is primarily marked using word order and prepositions, and certain verb features are marked using auxiliary verbs. Read more...

Jean-Baptiste Poquelin, mostly known by his stage name Molière, (French pronunciation: ​[mɔljɛʁ]; January 15, 1622 – February 17, 1673) was a French playwright and actor who is considered one of the greatest masters of comedy in Western literature. Among Molière's best-known dramas are Le Misanthrope (The Misanthrope), L'École des femmes (The School for Wives), Tartuffe ou L'Imposteur, (Tartuffe or the Hypocrite), L'Avare ou L'École du mensonge (The Miser), Le Malade imaginaire (The Imaginary Invalid), and Le Bourgeois gentilhomme (The Bourgeois Gentleman).

Born into a prosperous family and having studied at the Collège de Clermont (now Lycée Louis-le-Grand), Molière was well suited to begin a life in the theatre. Thirteen years as an itinerant actor helped him polish his comic abilities while he began writing, combining Commedia dell'Arte elements with the more refined French comedy.

Through the patronage of a few aristocrats, including Philippe I, Duke of Orléans -- the brother of Louis XIV -- Molière procured a command performance before the King at the Louvre. Performing a classic play by Pierre Corneille and a farce of his own, Le Docteur amoureux (The Doctor in Love), Molière was granted the use of salle du Petit-Bourbon at the Louvre, a spacious room appointed for theatrical performances. Read more... 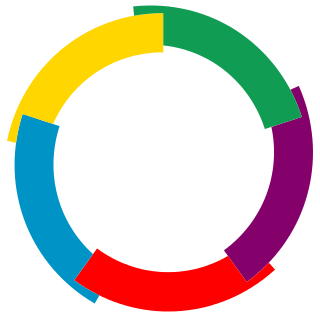 Template:/box-header Here is how you (yes you!) can help improve Wikipedia information on the French language and Francophonie: