Germany is one of the world's most industrialised countries, located in the center of Europe. It is bordered to the north by the North Sea, Denmark, and the Baltic Sea, to the south by Austria and Switzerland, to the west by France, Belgium, the Netherlands and Luxembourg, and to the east by Poland and the Czech Republic.

Germany is a democratic federal parliamentary republic, containing 16 federal states (Bundesländer), which in certain spheres act independently of the Federation or "Bund".

Germany is a developed country with a very high standard of living, and it maintains a comprehensive social security, a universal health care system and diverse environmental protection laws. It is a global leader in several industrial and technological sectors.

The Federal Republic of Germany is a member state of the United Nations, NATO, the G8 nations, and a founding member of the European Union. More... 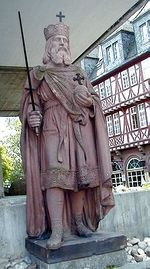 The Franks or the Frankish peoples were one of several west Germanic federations. They were not originally grouped into one official tribe, but "as with the other barbarians, they belonged to much smaller groups that would join constantly changing confederations." The confederation was formed out of Germanic tribes: Salians, Sicambri, Chamavi, Tencteri, Chattuarii, Bructeri, Usipetes, Ampsivarii, Chatti. Most of those peoples were living at the northern borders of the Rhine in what was then called Francia in the panegyrici Latini.

They entered the late Roman Empire from the north and east river bank of the Rhine into modern northern Belgium and southern Netherlands, where they were treated as foederati by Julian the Apostate (AD 358). Later invasions conquered and established a lasting realm (which again was referred to as Francia) in an area which eventually covered most of modern-day France, Belgium, the Netherlands, and the western regions of Germany (Franconia, Rhineland, Münsterland, Hesse), forming the historic kernel of all these modern countries. The conversion to Christianity of the pagan Frankish king Clovis in the late 5th century was a crucial event in the history of Europe. More... 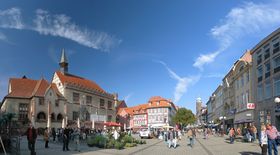 The market square of Göttingen. The Gänseliesel is visible on the left

More Germany-related news in English can be found at Deutsche Welle, Tagesschau, and Der Spiegel.

Things you can do

Here are some tasks you can do: