Jump to the nominations

Portal:Home improvement/Homes/1
The Xanadu Houses were a series of experimental homes, built to showcase examples of computers and automation in the home in the United States. The architectural project began in 1979, and during the early 1980s three houses were built in different parts of the United States: one each in Kissimmee, Florida; Wisconsin Dells, Wisconsin; and Gatlinburg, Tennessee. The houses included novel construction and design techniques, and became popular tourist attractions during the 1980s.

The Xanadu Houses were notable for being built with polyurethane insulation foam rather than concrete, for easy, fast, and cost-effective construction. They were ergonomically designed, and contained some of the earliest home automation systems. 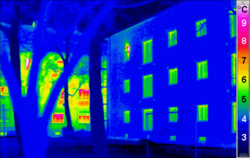 The term Passive house (Passivhaus in German) refers to the rigorous, voluntary, Passivhaus standard for energy use in buildings. It results in ultra-low energy buildings that require little energy for space heating. A similar standard, MINERGIE-P®, is used in Switzerland. The first Passivhaus buildings were built in Darmstadt, Germany, in 1990, and occupied the following year. In September 1996 the Passivhaus-Institut was founded in Darmstadt to promote and control the standard. Since then more than 6,000 Passivhaus buildings have been constructed in Europe, most of them in Germany and Austria, with others in various countries world-wide.

Despite the name, the standard is not confined only to houses. Several office buildings, schools, kindergartens and a supermarket have also been constructed to the standard. Although it is mostly applied to new buildings, it has also been used for refurbishments. 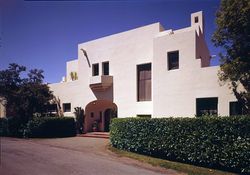 The Lou Henry and Herbert Hoover House, located on the campus of Stanford University in Palo Alto, California, USA, is a large, rambling house, resembling "blocks piled up." It was designed by Lou Henry Hoover, wife of Herbert Hoover, 31st President of the United States. After several consultations the Hoovers convinced Arthur B. Clark, a Stanford art professor who practiced freelance architecture during the summer, to be their architect. Clark agreed on the condition that Mrs. Hoover design the house and that Clark would serve in an advisory capacity.

The problem of size was solved by the hillside site with the house disappearing into the slope of San Juan Hill and hence appearing much smaller. The irregularly shaped house was built on a reinforced concrete slab foundation and rises two stories in the front and three stories in the rear. Resembling early International style homes, Mrs. Hoover's designs were modeled after North African Algerian homes. Elements of Mission Revival Style architecture can also be found in its design.

The Mark Twain House and Museum was the home of Mark Twain from 1874 to 1891 in Hartford, Connecticut, USA. Before 1874, Twain had lived in Hannibal, Missouri. The architectural style of the 19-room house itself is Victorian Gothic. The house was designed by Edward Tuckerman Potter, an architect from New York City. The total cost of the house was $40,000, paid out of Mrs. Clemens' inheritance.

Bad financial investments caused the Twain family to move to Europe in 1891. When they returned to Connecticut in 1900 he lived in a house built for him in Redding, Connecticut,named Stormfield, where he died on April 21, 1910. His home in Hartford functioned as a school, an apartment building, and a library after that. In 1962 it was declared a National Historic Landmark. Since 1974 it has had a multi-million dollar renovation and an expansion dedicated to showcasing his life and work.

The shotgun house is a narrow rectangular domestic residence, usually no more than 12 feet (3.7 m) wide, with doors at each end. It was the most popular style of house in the Southern United States from the end of the Civil War, through to the 1920s. Alternate names include shotgun shack, shotgun hut, and shotgun cottage.

The style was developed in New Orleans, but the houses can be found as far away as Chicago, Illinois; Key West, Florida; and California. Shotgun houses can still be found in many small southern towns. Though initially as popular with the middle class as with the poor, the shotgun house became a symbol of poverty in the mid-20th century. Opinion is now mixed: some houses are bulldozed due to urban renewal, while others are beneficiaries of historic preservation and gentrification.

Shotgun houses consist of three to five rooms in a row with no hallways. Several variations of shotgun houses allow for additional features and space, and many have been updated to the needs of future generations of owners.

Beaumont House was constructed on land initially owned by Sir Samuel Davenport, a wealthy Adelaide landlord. Following Short's move back to England, Davenport purchased the house—the second of five eventual owners. Following three sales between 1907 and 1911, the house was then transferred to the National Trust of South Australia in 1968.

Originally a five-bedroom residence, the Beaumont House estate has been expanded greatly. Most of the structural expansion took place between 1907 and 1911, when Maj. Vincent owned it; it has not been expanded or notably altered at all since being donated to the National Trust. 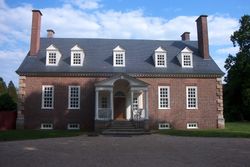 Gunston Hall is an 18th-century Georgian mansion near the Potomac River in Mason Neck, Virginia, United States of America. The house was the home of the United States Founding Father George Mason. It was located at the center of a 5500 acre (22 km²) plantation. The construction period of Gunston Hall was between 1755 and 1759.

The design was mostly that of William Buckland, a carpenter/joiner and indentured servant from England. Both he and William Bernard Sears, another indentured servant, are believed to have created the ornate woodwork and interior carving. Gunston's interior design combines elements of rococo, chinoiserie, and Gothic styles, an unusual contrast to the tendency for simple decoration in Virginia at this time. Although chinoiserie was popular in Britain, Gunston Hall is the only house known to have had this decoration in colonial America. In 1792, Thomas Jefferson attended George Mason at his death bed at Gunston Hall. After Mason's death later that year, the house continued to be used as a residence for many years.

The Isidore H. Heller House is a house located at 5132 South Woodlawn Avenue in the Hyde Park community area of Chicago in Cook County, Illinois, USA. The house was designed by American architect Frank Lloyd Wright. The design is credited as one of the turning points in Wright's shift to geometric, Prairie School architecture, which is defined by horizontal lines, flat or hipped roofs with broad overhanging eaves, windows grouped in horizontal bands, and an integration with the landscape.

The work demonstrates Wright's shift away from emulating the style of his mentor, Louis Sullivan. The ownership history of this building demonstrates the property's evolution and development in the framework of surrounding Hyde Park buildings, and the building's location in the current community—near other Prairie School architecture—includes this building into the overall body of Lloyd Wright's work. The Heller House was designated a Chicago Landmark on September 15, 1971, and added to the National Register of Historic Places on March 16, 1972. On 18 August 2004, the U.S. Department of the Interior designated the house a National Historic Landmark.

Is there a home improvement article good enough? Please post you suggestions below to let your voice be heard.

The nomination process here is relaxed, but articles that meet the featured article or good article requirements are more likely to gain support.