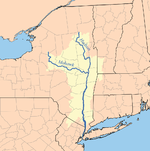 The Hudson Valley is the canyon of the Hudson River and its adjacent communities in New York State, generally from northern Westchester County northward to the cities of Albany and Troy. Historically a cradle of European settlement in the northeastern United States and a strategic battleground in colonial wars, it now consists of suburbs of the metropolitan area of New York City at its southern end, shading into rural territory, including "exurbs," farther north. Geographically, the Hudson Valley could refer to all areas along the Hudson River, including Bergen County, New Jersey. However, this definition is not commonly used and the Tappan Zee Bridge is often considered the southern limit of the area. Though Westchester County is often classified as part of the region, Westchester residents who live at the southern end of the county (and especially the locations closer to the Long Island Sound than the Hudson River) generally do not associate themselves with the region.

The Hudson River, called Muh-he-kun-ne-tuk in Mahican, the Great Mohegan by the Iroquois, or as the Lenape Native Americans called it in Unami, Muhheakantuck (Θkahnéhtati in Tuscarora), is a river that runs through the eastern portion of New York State and, along its southern terminus, demarcates the border between the states of New York and New Jersey. It is named for Henry Hudson, an Englishman sailing for the Dutch East India Company, who explored it in 1609. The Hudson River was originally named the Mauritius River, which is claimed to be the name given by Hudson in honor of Prince Maurice of Nassau.

New York State Route 28 (NY 28) is a state highway extending for 281.69 miles (453.34 km) in the shape of a "C" between the Hudson Valley city of Kingston and southern Warren County in the U.S. state of New York. Along the way, it intersects several major routes, including Interstate 88 (I-88), U.S. Route 20 (US 20), and the New York State Thruway twice. The southern terminus of NY 28 is at NY 32 in Kingston and the northern terminus is US 9 in Warrensburg. In Kingston, NY 28 is co-designated as Interstate 587 from its southern terminus at NY 32 to the roundabout linking it to the Thruway (I-87).

NY 28 was originally assigned in 1924 to an alignment extending from Colliersville in the south to Utica in the north via Ilion. From Colliersville to Cooperstown, the highway followed its current routing (excluding minor realignments); north of Cooperstown, NY 28 was routed along several state highways that now have other designations. The route was extended south to Kingston and north to Warrensburg as part of the 1930 renumbering of state highways in New York. At the same time, Route 28 was realigned between Cooperstown and Mohawk to follow its modern routing. Other than minor realignments in Kingston, Oneonta, and Oneida County, NY 28 has remained the same to this day. 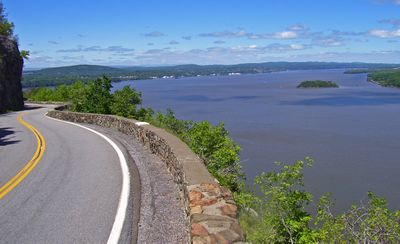 Gregory R. Ball (born September 16, 1977) is an American business executive, former active duty Air Force officer and member of the New York State Assembly. Ball focused on illegal immigration during his tenure in office, and was named a Chairman of Lawmakers for Legal Immigration, an immigration reform group. He is a resident of Carmel, New York. Assemblyman Ball serves as the ranking member on the Veteran's Affairs committee, and is also a member of the Election Law, Energy, Housing, and Social Services committees. He represents New York's 99th assembly district, which comprises the towns Patterson, Mahopac, Carmel, Southeast, Putnam Lake and Brewster, in Putnam County; Yorktown, Mohegan Lake, Somers, and North Salem in Westchester County; and Pawling in Duchess County.