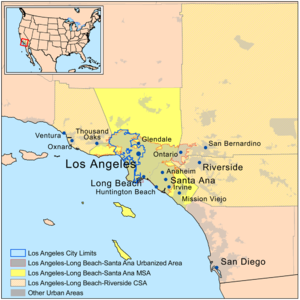 The Greater Los Angeles Area, or the Southland, is a term used for both the urbanized region and Combined Statistical Area (a group of interacting metropolitan areas) sprawling over five counties in the southern part of California, namely Los Angeles, Orange, San Bernardino, Riverside, and Ventura counties. Throughout the 20th century, it was one of the fastest-growing regions in the United States, although growth has slowed since 2000. As of the 2010 U.S. Census, the Los Angeles metropolitan area had a population of about 12.8 million residents. Meanwhile, the larger metropolitan region's population at the 2010 census was estimated to be over 17.8 million residents, and a 2011 estimate reported a population of about 18.1 million. Either definition makes it the second largest metropolitan region in the country, behind the New York metropolitan area, as well as one of the largest urban agglomerations in the world.

William Denby "Bill" Hanna (July 14, 1910 – March 22, 2001) was an American animator, director, producer, voice actor, and cartoon artist, whose film and television cartoon characters entertained millions of people for much of the 20th century.

After working odd jobs in the first months of the Depression, Hanna joined the Harman and Ising animation studio in 1930. During the 1930s, Hanna steadily gained skill and prominence while working on cartoons such as Captain and the Kids. In 1937, while working at Metro-Goldwyn-Mayer (MGM), Hanna met Joseph Barbera. The two men began a collaboration that was at first best known for producing Tom and Jerry and live action films. In 1957, they co-founded Hanna-Barbera, which became the most successful television animation studio in the business, producing programs such as The Flintstones, The Huckleberry Hound Show, The Jetsons, Scooby-Doo, The Smurfs, and Yogi Bear. In 1967, Hanna–Barbera was sold to Taft Broadcasting for $12 million, but Hanna and Barbera remained heads of the company until 1991. At that time, the studio was sold to Turner Broadcasting System, which in turn was merged with Time Warner in 1996; Hanna and Barbera stayed on as advisors.

Hanna and Barbera won seven Academy Awards and eight Emmy Awards. Their cartoons have become cultural icons, and their cartoon characters have appeared in other media such as films, books, and toys. Hanna–Barbera's shows had a worldwide audience of over 300 million people in their 1960s heyday, and have been translated into more than 28 languages. More...

The page "Portal:Greater Los Angeles/Did you know/9" does not exist.