Musical theatre is a form of theatre combining music, songs, spoken dialogue and dance. The emotional content of the piece – humor, pathos, love, anger – as well as the story itself, is communicated through the words, music, movement and technical aspects of the entertainment as an integrated whole.

Musical theatre works, usually referred to as "musicals", are performed around the world. They may be presented in large venues, such as big budget West End and Broadway theatre productions in London and New York City, or in smaller Off-Broadway or regional productions, on tour, or by amateur groups in schools, theatres and other performance spaces. In addition to Britain and the U.S., there are vibrant musical theatre scenes in Germany, Austria, Philippines, France, Canada, Japan, Eastern Europe, Australia, and other countries. Template:/box-footer

Hair: The American Tribal Love-Rock Musical is a rock musical with a book and lyrics by James Rado and Gerome Ragni and music by Galt MacDermot. A product of the hippie counter-culture and sexual revolution of the 1960s, several of its songs became anthems of the anti-Vietnam War peace movement. The musical's profanity, its depiction of the use of illegal drugs, its treatment of sexuality, its irreverence for the American flag, and its nude scene caused much comment and controversy. The musical broke new ground in musical theatre by defining the genre of the "rock musical", utilizing a racially-integrated cast and inviting the audience onstage for a "Be-in" finale.

Hair tells the story of the "tribe", a group of politically active, long-haired "Hippies of the Age of Aquarius" fighting against conscription to the Vietnam War and living a bohemian life together in New York City. They struggle to balance their young lives, loves and the sexual revolution with their pacifist rebellion against the war and the conservative impulses of their parents and society.

After an off-Broadway debut in October 1967 at Joseph Papp's Public Theater and another run in a midtown discothèque space, the show opened on Broadway in April 1968 and ran for 1,750 performances, followed by a successful London production, which ran for 1,997 performances. Numerous productions have been staged around the world since then, and numerous recordings of the musical have been released. Several of the songs from its score became Top 40 hits, and a successful movie adaptation was released in 1979. 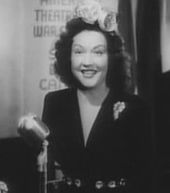 Ethel Merman (January 16, 1908 – February 15, 1984) was a Tony Award- and Grammy Award-winning American star of stage and film musicals, well known for her powerful voice and vocal range, often hailed by critics as "The Queen of the Broadway stage."

Merman starred in five Cole Porter musicals, among them Anything Goes in 1934, where she introduced "I Get a Kick Out of You", "Blow Gabriel Blow", and the title song. Her next musical with Porter was Red, Hot and Blue in which she co-starred with Bob Hope and Jimmy Durante and introduced "It's Delovely" and "Down in the Depths (on the 90th floor)." In 1939's DuBarry Was a Lady, Porter provided Merman with a "can you top this" duet with Bert Lahr, "Friendship". Like "You're the Top" in Anything Goes, this kind of duet became one of her signatures. Porter's lyrics also helped showcase her comic talents in duets in Panama Hattie ("Let's Be Buddies", "I've Still Got My Health"), and Something for the Boys, ("By the Mississinewah", "Hey Good Lookin'").

Irving Berlin supplied Merman with equally memorable duets, including counterpoint songs An Old-Fashioned Wedding with Bruce Yarnell, written for the 1966 revival of Annie Get Your Gun, and "You're Just in Love" with Russell Nype in Call Me Madam. Merman won the 1951 Tony Award for Best Actress for her performance as Sally Adams in Call Me Madam. She reprised her role in the lively Walter Lang film version.

Perhaps Merman's most revered performance was in Gypsy as Gypsy Rose Lee's mother Rose. Merman introduced "Everything's Coming Up Roses", "Some People", and ended the show with the wrenching "Rose's Turn". Critics and audiences saw her creation of Madame Rose as the performance of her career. She did not get the role in the movie version, however, which went to movie actress Rosalind Russell, and an infuriated Merman was quoted as saying: "There's a name for women like her but it's seldom used in society outside [of] a kennel." (Since this is a line from the film The Women, in which Russell appeared, the story may be apocryphal.) She also insulted Russell's husband, Freddie Brisson, by calling him the "Lizard of Roz". Merman decided to take Gypsy on the road and trumped the motion picture as a result.

The show is explicitly an homage to the PBS children's television program Sesame Street. Both Marx and puppet designer/original cast member, Rick Lyon have previously worked for Sesame Street, as have the other puppeteers in the original cast. However, unlike Sesame Street, Avenue Q openly addresses adult topics such as racism, infidelity, and masturbation; in fact, because of its adult language and content and "full puppet nudity" (including simulated sex between puppets), the show specifically disclaims any connection to the Children's Television Workshop or The Jim Henson Company. In an interview with Britain's The Times, addressing the question of potential conflicts with Henson, Marx claimed, “During early previews in the States we invited Jim Henson's widow and children and they could see that what we were doing was a homage and love letter to 'Sesame Street.'”

The current Musical Theatre Collaboration of the Month is
All Stub class articles beginning with the letter "A".
The next winner will be selected on
Template talk:Collab-Musical-Theatre.