The Vikings started to raid the Seine Valley during the middle of ninth century. After attacking and destroying monasteries, including one at Jumièges, they took advantage of the power vacuum created by the disintegration of Charlemagne's empire to take northern France. The fiefdom of Normandy was created for the Viking leader Rollo (also known as Robert of Normandy). Rollo had besieged Paris but in 911 entered vassalage to the king of the West Franks, Charles the Simple, through the Treaty of Saint-Clair-sur-Epte. In exchange for his homage and fealty, Rollo legally gained the territory which he and his Viking allies had previously conquered. The name "Normandy" reflects Rollo's Viking (i.e. "Northman") origins.

The descendants of Rollo and his followers adopted the local Gallo-Romantic language and intermarried with the area's original inhabitants. They became the Normans – a Norman-speaking mixture of Scandinavians, Hiberno-Norse, Orcadians, Anglo-Danish, and indigenous Franks and Gauls.

Rollo's descendant William, Duke of Normandy, became king of England in 1066 in the Norman conquest of England culminating at the Battle of Hastings, while retaining the fiefdom of Normandy for himself and his descendants. Besides the conquest of England and the subsequent conquests of Wales and Ireland, the Normans expanded into other areas. Norman families, such as that of Tancred of Hauteville, played important parts in the Crusades where Bohemond I of Antioch established the Principality of Antioch in the First Crusade. The Principality would outlast the Norman dynasties in both England and Sicily.

Tancred's sons William Iron Arm, Drogo of Hauteville, Humphrey of Hauteville, Robert Guiscard and Roger the Great Count conquered the Emirate of Sicily and additional territories in Southern Italy in the Norman conquest of southern Italy and formed the Kingdom of Sicily.

In 1204, during the reign of England's King John, mainland Normandy was taken from England by France under Philip II of France. Insular Normandy (the Channel Islands) remained under English control. In 1259, Henry III of England recognised the legality of French possession of mainland Normandy under the Treaty of Paris. His successors, however, often fought to regain control of mainland French Normandy.

The Charte aux Normands granted by Louis X of France in 1315 (and later re-confirmed in 1339) – like the analogous Magna Carta granted in England in the aftermath of 1204 – guaranteed the liberties and privileges of the province of Normandy.

French Normandy was occupied by English forces during the Hundred Years' War in 1345–1360 and again in 1415–1450. Afterward prosperity returned to Normandy until the Wars of Religion. When many Norman towns (Alençon, Rouen, Caen, Coutances, Bayeux) joined the Protestant Reformation, battles ensued throughout the province. In the Channel Islands, a period of Calvinism following the Reformation was suppressed when Anglicanism was imposed following the English Civil War.

To press his claim to the English crown, William the Conqueror invaded England in 1066, leading an army of Normans, Bretons, Flemings, and Frenchmen (from Paris and Île-de-France) to victory over the English forces of King Harold Godwinson at the Battle of Hastings, and suppressed subsequent English revolts in what has become known as the Norman Conquest. His reign, which brought Norman-French culture and language to England, had an impact on the subsequent course of England in the Middle Ages. The details of that impact and the extent of the changes have been debated by scholars for centuries. In addition to the obvious change of ruler, his reign also saw a programme of building and fortification, changes to the English language, a shift in the upper levels of society and the church, and adoption of some aspects of continental church reform. 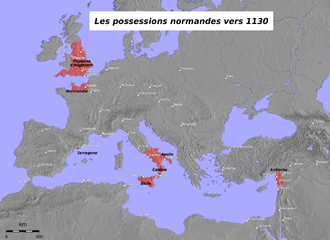 Samuel de Champlain left the port of Honfleur in 1604 and founded Acadia. Four years later, he founded Quebec City. From then onwards, Normans engaged in a policy of expansion in North America. They continued the exploration of the New World: René Robert Cavelier de La Salle travelled in the area of the Great Lakes, then on the Mississippi River. Pierre Le Moyne d'Iberville and his brother Lemoyne de Bienville founded Louisiana, Biloxi, Mobile and New Orleans. Territories located between Quebec and the Mississippi Delta were opened up to establish Canada and Louisiana. Colonists from Normandy were among the most active in New France, comprising Acadia, Canada, and Louisiana.