Noreg (Nynorsk)), officially the Kingdom of Norway, is a Scandinavian unitary constitutional monarchy whose territory comprises the western portion of the Scandinavian Peninsula, Jan Mayen, the Arctic archipelago of Svalbard and the subantarctic Bouvet Island. The Spitsbergen Treaty (also known as the Svalbard Treaty) of February 9, 1920, recognizes the full and absolute sovereignty of Norway over the arctic archipelago of Spitsbergen (now called Svalbard). Peter I Island is dependent territory (Norwegian: biland) of Norway but is not considered part of the Kingdom. Norway also lays claim to a section of Antarctica known as Queen Maud Land. Norway has a total area of 385,252 square kilometres (148,747 sq mi) and a population of about 5 million. It is the second least densely populated country in Europe. The majority of the country shares a border to the east with Sweden; its northernmost region is bordered by Finland to the south and Russia to the east; in its south Norway borders the Skagerrak Strait across from Denmark. The capital city of Norway is Oslo. Norway's extensive coastline, facing the North Atlantic Ocean and the Barents Sea, is home to its famous fjords.

Two centuries of Viking raids tapered off following the adoption of Christianity by King Olav Tryggvason in 994. A period of civil war ended in the 13th century when Norway expanded its control overseas to parts of Britain, Ireland, Iceland, and Greenland. Norwegian territorial power peaked in 1265, but competition from the Hanseatic League and the spread of the Black Death weakened the country. In 1380, Norway was absorbed into a union with Denmark that lasted more than four centuries. In 1814, Norwegians resisted the cession of their country to Sweden and adopted a new constitution. Sweden then invaded Norway but agreed to let Norway keep its constitution in return for accepting the union under a Swedish king. Rising nationalism throughout the 19th century led to a 1905 referendum granting Norway independence. Although Norway remained neutral in World War I, it suffered heavy losses to its shipping. Norway proclaimed its neutrality at the outset of World War II, but was nonetheless occupied for five years by the Third Reich. In 1949, neutrality was abandoned and Norway became a founding member of NATO. Discovery of oil and gas in adjacent waters in the late 1960s boosted Norway's economic fortunes. In referenda held in 1972 and 1994, Norway rejected joining the EU. Key domestic issues include immigration and integration of ethnic minorities, maintaining the country's extensive social safety net with an aging population, and preserving economic competitiveness.

Norway is a unitary parliamentary democracy and constitutional monarchy, with King Harald V as its head of state and Erna Solberg as its prime minister. It is a unitary state with administrative subdivisions on two levels known as counties (fylke) and municipalities (kommuner). The Sámi people have a certain amount of self-determination and influence over traditional territories through the Sámi Parliament and the Finnmark Act. Although having rejected European Union membership in two referenda, Norway maintains close ties with the union and its member countries, as well as with the United States. Norway remains one of the biggest financial contributors to the United Nations, and participates with UN forces in international missions, notably in Afghanistan, Kosovo, Sudan and Libya. Norway is a founding member of the United Nations, NATO, the Council of Europe, and the Nordic Council; a member of the European Economic Area, the WTO, and the OECD; and is also a part of Schengen Area.

Norway has extensive reserves of petroleum, natural gas, minerals, lumber, seafood, fresh water, and hydropower. The country has the fourth-highest per capita income in the world. On a per-capita basis, it is the world's largest producer of oil and natural gas outside the Middle East, and the petroleum industry accounts for around a quarter of the country's gross domestic product. The country maintains a Nordic social benefit model with universal health care, subsidized higher education, and a comprehensive social security system. From 2001 to 2006, and then again from 2009 through 2011, Norway has had the highest human development index ranking in the world. In 2011, Norway also ranked the highest on the Democracy Index.

A T1300 unit at Nydalen
The Oslo Metro is the rapid transit system of Oslo, Norway, operated by Oslo T-banedrift on contract from the transit authority Ruter. The network consists of six lines that all run through the city center, with a total length of 84.2 kilometres (52.3 mi). It has a daily ridership of 200,000 with 105 stations of which 16 are underground or indoors. In addition to serving all 15 boroughs of Oslo, two lines run to Bærum. The first rapid transit line was the Holmenkoll Line, opened in 1898, with the branch Røa Line opening in 1912. It became the first Nordic underground railway in 1928 when the underground line to Nationaltheatret was opened. The Sognsvann Line opened in 1934 and the Kolsås Line in 1942. The opening of the upgraded T-bane system on the east side of town occurred in 1966, after the conversion of the 1957 Østensjø Line, followed by the new Lambertseter Line, the Grorud Line and the Furuset Line; in 1993 trains ran under the city between the two networks in the Common Tunnel, followed by the 2006 opening of the Ring Line. Between 2006 and 2010 the system is replacing the older T1000 stock with MX3000 stock.
edit 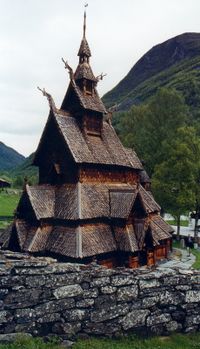 Gunnhildr konungamóðir (mother of kings) or Gunnhildr Özurardóttir (c. 900  –  c. 980) was the wife of Erik Bloodaxe (king of Norway 930–34, "king" of Orkney c. 937–54, and king of Jórvík 948–49 and 952–54). Gunnhild is a prominent figure in many Norse sagas, including Fagrskinna, Egil's Saga, Njal's Saga, and Heimskringla. Many of the details of her life are disputed, including her parentage. Gunnhild lived during a time of great change in Norway. Her father-in-law Harald Fairhair had recently united much of Norway under his rule. Shortly after his death, Gunnhild and her husband were overthrown and exiled. She spent much of the rest of her life in exile in Orkney, Jorvik and Denmark. A number of her many children with Erik became co-rulers of Norway in the late tenth century. What details of her life are known come largely from Icelandic sources; because the Icelanders were generally hostile to her and her husband, scholars regard some of the more negative episodes reported in them as suspect.
edit

Bryggen (Norwegian for the Wharf), also known as Tyskebryggen (the German Wharf) is a series of Hanseatic commercial buildings lining the eastern side of the fjord coming into Bergen, Norway. Bryggen is on the UNESCO list for World Cultural Heritage sites. The name has the same origin as the Flemish city of Brugge.