Philadelphia is one of the oldest and most historically significant U.S. cities. It was the nation's first capital. At the time of the American Revolution, it was the second-largest English-speaking city in the world, after only London. Into the first part of the 19th century, it was the country's most populous city and eclipsed Boston and New York City in political and social importance. Benjamin Franklin played an extraordinary role in Philadelphia's rise. 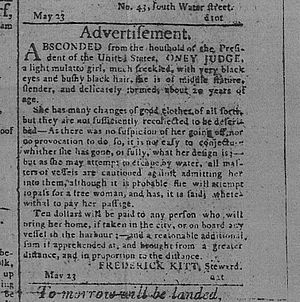 Oney Judge was a slave at George Washington's plantation, Mount Vernon, in Virginia. A servant in Washington's presidential households beginning in 1789, she escaped to freedom from the Philadelphia President's House on Saturday, May 21, 1796, and defied his attempts to recapture her. More is known about her than any other Mount Vernon slave because she was twice interviewed by abolitionist newspapers in the 1840s. The Pennsylvania Gazette ran this "runaway" advertisement on May 24, 1796.

The Rohm and Haas Corporate Headquarters in Philadelphia, Pennsylvania, is the headquarters for the chemical manufacturing company Rohm and Haas. Completed in 1964, the building was the first private investment for the urban renewal of the Independence Mall area. Only two blocks from Independence Hall, the building, designed by Pietro Belluschi and George M. Ewing Co., was lauded for its respect to the nearby park and historical buildings. Philadelphia's city planners praised the building as a standard for all redevelopment buildings. The nine-story edifice's most notable feature is its facade of translucent, corrugated sunscreens; held in place by aluminum lattices, the sunscreens are made of Rohm and Haas's principal product, Plexiglas. In 2007 the building was listed on the National Register of Historic Places and is today considered one of the best examples of the International style.

Mumia Abu-Jamal is an American who was convicted and sentenced to death for the December 9, 1981 murder of Philadelphia police officer Daniel Faulkner. Before his arrest he was a member of the Black Panther Party, an activist, part-time cab driver, journalist, radio personality, news commentator and broadcaster. Since his conviction, his case has received international attention and he has become a controversial cultural icon. Supporters and opponents disagree on the appropriateness of the death penalty, whether he is guilty, or whether he received a fair trial. During his imprisonment he has published several books and other commentaries, notably Live from Death Row. Since 1995, Abu-Jamal has been incarcerated at Pennsylvania's SCI Greene near Waynesburg, where most of the state’s capital case inmates are held. In 2008, a three-judge panel of the U.S. 3rd Circuit Court of Appeals upheld the murder conviction, but ordered a new capital sentencing hearing over concerns that the jury was improperly instructed. In April 2009, the United States Supreme Court refused to hear an appeal for a new trial, allowing his July 1982 conviction to stand. A separate appeal by prosecutors to reinstate the death penalty has not yet been heard.

"Socially, Philadelphia was still a fairly provincial city, its business community governed by the mores of the Main Line. Politically, it was a cauldron of ethnic rivalries, dominated by competing Irish and Italian constituencies."