Physics (from Greek φυσική (ἐπιστήμη), i.e. "knowledge of nature", from φύσις, physis "nature"), is the natural science that involves the study of matter (anything that has mass and occupies space) and its motion (movement from place to another) through space and time, along with related concepts such as energy and force. More broadly, it is the general analysis of nature, conducted in order to understand how the universe behaves.

Physics is one of the oldest academic disciplines, perhaps the oldest through its inclusion of astronomy. Evidence exists that the earliest civilizations dating back to beyond 3000 BCE, such as the Sumerians, Ancient Egyptians, and the Indus Valley Civilization, all had a predictive knowledge and a very basic understanding of the motions of the Sun, Moon, and stars. Although originally part of other physical sciences and mathematics, Physics emerged to become a unique modern science during the Scientific Revolution of the 16th century.

Physics also has philosophical implications. It can be historically traced back to ancient Greek philosophy. From Thales' first attempt to characterize matter, to Democritus' deduction that matter ought to reduce to an invariant state, the Ptolemaic astronomy of a crystalline firmament, and Aristotle's book Physics, different Greek philosophers advanced their own theories of nature. Well into the 18th century, physics was known as "Natural philosophy". By the 19th century physics was realized as a positive science and a distinct discipline separate from philosophy and the other sciences. Physics, as with the rest of science, relies on philosophy of science to give an adequate description of the scientific method. Template:/box-footer

Template:/box-header Below are links to pages that are rated "Good Article" within WikiProject Physics from letters "A" through "L". The small good article icon (

), which can be found on the top right corner of a rated Wikipedia page, symbolizes content held to a high standard on Wikipedia, although these have not reached Featured Article status.

An arc lamp or arc light is a lamp that produces light by an electric arc (also called a voltaic arc). The carbon arc light, which consists of an arc between carbon electrodes in air, invented by Humphry Davy in the early 1800s, was the first practical electric light. It was widely used starting in the 1870s for street and large building lighting until it was superseded by the incandescent light in the early 20th century. It continued in use in more specialized applications where a high intensity point light source was needed, such as searchlights and movie projectors until after World War II.

Template:/box-header europa is a moon of jupiter.europa is smooth and icy and may contain water. 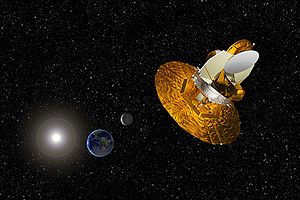 Whether you are an expert or a novice, be bold, improve an article by editing it. Practice in the sandbox if you must. But hurry back to fix that glaring error that has been bothering you.

Check list for physics novices and experts new to wikipedia

Whether you are an expert or a novice, be bold, improve an article by editing it. Practice in the sandbox if you must. But hurry back to fix that glaring error that has been bothering you.

Activities for physics novices and experts familiar with wikipedia