Russia (Russian: Россия, Rossiya), also the Russian Federation (Rossiyskaya Federatsiya), is a Eurasian country extending over much of northern Eurasia. It is a semi-presidential republic comprising 85 federal subjects. From northwest to southeast, Russia shares borders with Norway, Finland, Estonia, Latvia, Lithuania and Poland (both via Kaliningrad Oblast), Belarus, Ukraine, Georgia, Azerbaijan, Kazakhstan, China, Mongolia, and North Korea. It also has maritime borders with Japan by the Sea of Okhotsk, Iran through the Caspian Sea, and the U.S. state of Alaska by the Bering Strait.

At 17,075,400 square kilometers, Russia is by far the largest country in the world, covering more than an eighth of the Earth’s land area; with 143 million people, it is the eighth largest by population. It extends across the whole of northern Asia and 40% of Europe, spanning 11 time zones and incorporating a great range of environments and landforms. Russia has the world's greatest reserves of mineral and energy resources, and is considered an energy superpower. It has the world's largest forest reserves and its lakes contain approximately one-quarter of the world's unfrozen fresh water.

The Hungarian Revolution of 1956 was a spontaneous nationwide revolt against the Neo-Stalinist government of Hungary and its Soviet-imposed policies, lasting from October 23 until November 10, 1956. It began as a student demonstration which attracted thousands as it marched through central Budapest to the Parliament building. The revolt spread quickly across Hungary, and the government fell. Thousands organized into militias, battling the State police force and Soviet troops. The new government formally disbanded the State police force, declared its intention to withdraw from the Warsaw Pact and pledged to re-establish free elections. On November 4, a large Soviet force invaded Budapest using artillery and air strikes, killing thousands of civilians. Organized resistance ceased by 10 November 1956, and mass arrests began. An estimated 200,000 Hungarians fled as refugees. By January 1957 the new Soviet-installed government had suppressed all public opposition. Soviet actions alienated many Western Marxists, yet strengthened Soviet control over Eastern Europe, cultivating the perception that communism was both irreversible and monolithic. Public discussion about this revolution was suppressed in Hungary for over 30 years, but since the thaw of the 1980s it has been a subject of intense study and debate.
edit 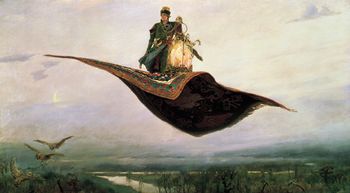 A painting depicting Ivan Tsarevich, one of the main heroes of folklore of Russia, riding a magic carpet after having captured the Firebird, which he keeps in a cage. This work was Viktor Vasnetsov's first attempt at illustrating Russian folk tales and inaugurated a famous series of paintings on the themes drawn from Russian folklore.

Hovhannes Bagramyan was a Soviet Armenian military commander and Marshal of the Soviet Union. During World War II, Bagramyan became the first non-Slavic military officer to become a commander of a Front. Bagramyan's previous experience in military planning as a chief of staff officer allowed him to distinguish himself as a capable commander during the war in the early stages of the Soviet counter-offensives against Nazi Germany. He was given his first command of a unit in 1942 and in November 1943, received his most prestigious command as the head of the First Baltic Front. As head of the Baltic Front, he participated in the offensives which moved westwards to push German forces out of the occupied Soviet Union and the recapturing of the Baltic republics. After the war, he served as a deputy member of the Supreme Soviets of the Latvian Soviet Socialist Republic and Armenian Soviet Socialist Republic and was a regular attendant of the Party Congresses. In 1952, he became a candidate for entry into the Central Committee and, in 1961, was inducted as a full member. For his contributions during the war, he was widely regarded as a national hero in the Soviet Union, and continues to hold such esteemed status among many Armenians today.