Science is the methodical study of nature including testable explanations and predictions. During the Middle Ages in the Middle East, foundations for the scientific method were laid by Alhazen in his Book of Optics. From classical antiquity through the 19th century, science as a type of knowledge was more closely linked to philosophy than it is now and, in fact, in the Western world, the term "natural philosophy" encompassed fields of study that are today associated with science, such as astronomy, medicine, and physics. While the classification of the material world by the ancient Indians and Greeks into Air, Earth, Fire and Water was more philosophical, medieval middle eastern scientists used practical, experimental observation to classify materials.

Today, the ever-evolving term "science" refers to the pursuit of knowledge, not the knowledge itself. It is often synonymous with "natural and physical science" and often restricted to those branches of study relating to the phenomena of the material universe and their laws. Although the term implies exclusion of pure mathematics, many university faculties include Mathematics Departments within their Faculty of Science. The dominant sense in ordinary use has a narrower use for the term "science." It developed as a part of science becoming a distinct enterprise of defining the "laws of nature"; early examples include Kepler's laws, Galileo's laws, and Newton's laws of motion. In this period it became more common to refer to natural philosophy as "natural science." Over the course of the 19th century, the word "science" became increasingly associated with the disciplined study of the natural world, including physics, chemistry, geology and biology. This sometimes left the study of human thought and society in a linguistic limbo, which was resolved by classifying these areas of academic study as social science. For example, psychology evolved from philosophy, and has grown into an area of study.

Currently, there are both "hard" (e.g. biological psychology) and "soft" science (e.g. social psychology) fields within the discipline. As a result, and as is consistent with the unfolding of the study of knowledge and development of methods to establish facts, each area of psychology employs a scientific method. Reflecting the evolution of the development of knowledge and established facts and the use of the scientific method, Psychology Departments in universities are found within: Faculty of Arts and Science, Faculty of Arts, and a Faculty of Science. Similarly, several other major areas of disciplined study and knowledge exist today under the general rubric of "science", such as formal science and applied science. 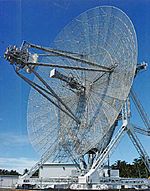 RADAR is a system that uses radio waves to determine and map the location, direction, and/or speed of both moving and fixed objects such as aircraft, ships, motor vehicles, weather formations and terrain. A transmitter emits radio waves, which are reflected by the target and detected by a receiver, typically in the same location as the transmitter. Although the radio signal returned is usually very weak, radio signals can easily be amplified, so radar can detect objects at ranges where other emissions, such as sound or visible light, would be too weak to detect. Radar is used in many contexts, including meteorological detection of precipitation, air traffic control, police detection of speeding traffic, and by the military.

The term RADAR was coined in 1941 as an acronym for Radio Detection and Ranging. This acronym of American origin replaced the previously used British abbreviation RDF (Radio Direction Finding). The term has since entered the English language as a standard word, radar, losing the capitalization in the process. 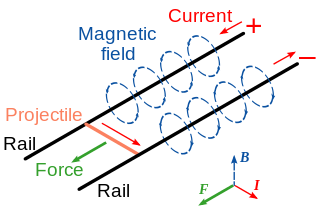 A railgun is a form of gun that converts electrical energy—rather than the more conventional chemical energy from an explosive propellant—into projectile kinetic energy. It is not to be confused with a coilgun (Gauss gun). The term railgun is also used for conventional firearms used in the Unlimited class of benchrest shooting.

Barbara McClintock (June 16, 1902 – September 2, 1992) was a pioneering American scientist and one of the world's most distinguished cytogeneticists. McClintock received her PhD in botany from Cornell University in 1927, where she was a leader in the development of maize cytogenetics. The field remained the focus of her research for the rest of her career. From the late 1920s, McClintock studied chromosomes and how they change during reproduction in maize. She developed the technique to visualize maize chromosomes and demonstrate genetic recombination by crossing-over during meiosis—a mechanism by which chromosomes exchange information. She produced the first genetic map for maize, and she demonstrated the role of the telomere and centromere. She was awarded prestigious fellowships and elected a member of the National Academy of Sciences in 1944.