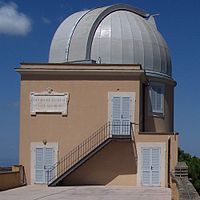 The Vatican Observatory (Specola Vaticana) is an astronomical research and educational institution supported by the Holy See. Originally based in the Roman College of Rome, it now has headquarters and laboratory at the summer residence of the Pope in Castel Gandolfo, Italy, and an observatory at the Mount Graham International Observatory in the United States.[3]