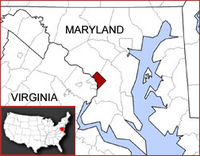 The District of Columbia, founded on July 16, 1790, is a federal district as specified by the United States Constitution. The U.S. Congress has ultimate authority over the District of Columbia, though it has delegated limited local rule to the municipal government. The centers of all three branches of the federal government are in Washington, D.C., as well as the headquarters of most federal agencies and many international organizations.

Frederick Douglass (February 141, 1818 – February 20, 1895) was an American abolitionist, editor, orator, author, statesman and reformer. Called "The Sage of Anacostia" and "The Lion of Anacostia," Douglass was among the most prominent African Americans of his time, and one of the most influential lecturers and authors in American history. Frederick Augustus Washington Bailey, who later became known as Frederick Douglass, was born a slave in Talbot County, Maryland near Hillsboro. He was separated from his mother, Harriet Bailey, when he was still an infant. She died when Douglass was about seven years old. The identity of Douglass' father is obscure; Douglass originally stated that his father was a white man, perhaps his master, Captain Aaron Anthony, but later said that he knew nothing of his father's identity. When Anthony died, Douglass was given to Mrs. Lucretia Auld, wife of Captain Thomas Auld; the young man was sent to Baltimore to serve the Captain's brother, Hugh Auld. When Douglass was about twelve, Hugh Auld's wife, Sophia, broke the law by teaching Douglass some letters of the alphabet. Thereafter, as detailed in his Narrative of the Life of Frederick Douglass, an American Slave (published in 1845), Douglass succeeded in learning to read from white children in the neighborhood in which he lived, and by observation of writings of the men with whom he worked. Douglass later referred to the lessons he received from Sophia Auld in his first abolitionist speech. (more...) Template:/box-footer