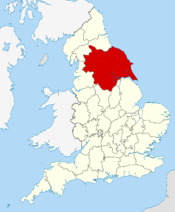 Location of Yorkshire in England

Yorkshire is a historic county of Northern England and the largest in Great Britain. Although Yorkshire is not a current unit of civil administration, it is included in the name of a number of contemporary subdivisions such as Yorkshire and the Humber. The name is familiar and well-understood across the United Kingdom and is in common use. Throughout much of history Yorkshire has played a prominent role in Great Britain. The Brigantes, who were the largest Celtic Briton tribe, held it as their heartland. The Romans made York (from which the county derives its name) one of the two capitals of all Roman Britain. The area was an independent Viking kingdom known as Jórvík for around a century, before being taken by England. Most of the modern day large cities were founded during the Norman period.

The county covered just under 6,000 square miles (15,000 km²) in 1831 and the modern day Yorkshire and the Humber region has a population of around five million. Yorkshire is widely considered to be the greenest area in England, due to both the vast rural countryside of the Yorkshire Dales, North York Moors and some of the major cities, this has led to Yorkshire being nicknamed God's Own County. (read more) . . . Template:/box-footer

York Museum Gardens are botanic gardens in the centre of York, England. They cover an area of 10 acres (4.0 ha) of the former grounds of St Mary's Abbey, and, along with the Yorkshire Museum, they were created during the 1830s by the Yorkshire Philosophical Society. They are held on trust by the City of York Council and managed by the York Museums Trust. The gardens were designed by landscape architect Sir John Murray Naysmith in a gardenesque style, and contain a variety of species of plants, trees and birds. Admission is free.

There are several historic buildings in the gardens. They contain the remains of the west corner of the Roman fort of Eboracum, including the Multangular Tower and parts of the Roman walls. Most of the other buildings dating from the Middle Ages are associated with St. Mary's Abbey. The remains of St. Leonard's Hospital chapel and undercroft are on the east side of the gardens. The Yorkshire Philosophical Society constructed several buildings in the gardens during the 19th and early 20th century, including the Yorkshire Museum and its octagonal observatory. The museum houses four permanent collections, covering biology, geology, archaeology and astronomy. (read more . . . ) 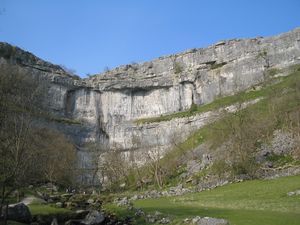 Credit: David Benbennick
Malham Cove is a natural limestone formation, known as a national beauty spot, near Malham, North Yorkshire. It comprises a huge, curved limestone cliff at the head of a valley, with a fine area of limestone pavement at the top. (read more . . . ) 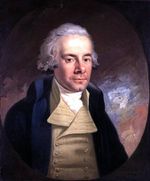 William Wilberforce (24 August 1759 – 29 July 1833) was a British politician, philanthropist and a leader of the movement to abolish the slave trade. A native of Hull, Yorkshire, he began his political career in 1780 and became the independent Member of Parliament for Yorkshire (1784–1812) and a close friend of Prime Minister William Pitt the Younger. In 1785 he underwent a conversion experience and became an evangelical Christian, resulting in changes in his lifestyle and in his interest in reform. In 1787 he came into contact with Thomas Clarkson and a group of anti-slave trade activists, including Granville Sharp, Hannah More and Lord Middleton. They persuaded Wilberforce to take on the cause of abolition; and he soon became one of the leading English abolitionists, heading the parliamentary campaign against the British slave trade until the eventual passage of the Slave Trade Act in 1807. Wilberforce died just three days after hearing that the passage of the Act through Parliament was secure. He was buried in Westminster Abbey, close to his friend William Pitt. (read more . . . )
More biographies...

List of Hull City A.F.C. seasons – Hull City A.F.C., an English association football club based in Kingston upon Hull, East Riding of Yorkshire, was founded in 1904. The team's first competitive matches came in the FA Cup, being beaten 4–1 by Stockton in a replay following a 3–3 draw, before they were elected to the Football League Second Division ahead of the 1905–06 season. Since their election to the Football League in 1905, Hull have spent two seasons in the first tier, 56 in the second, 30 in the third and 10 in the fourth. The table details Hull City's achievements in senior first team competition from the 1904–05 season to the end of the most recently completed season. (read more . . . )

More Did You Knows...