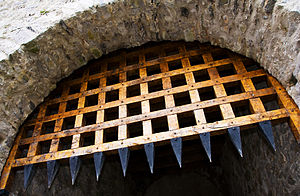 A portcullis (from the French porte coulissante, "sliding door") is a kind of heavy vertically-closing gate typically found in medieval fortifications, consisting of a latticed grille made of wood, metal, or a combination of the two, which slides down grooves inset within each jamb of the gateway.

Portcullises fortified the entrances to many medieval castles, securely closing off the castle during time of attack or siege. Every portcullis was mounted in vertical grooves in the walls of the castle and could be raised or lowered quickly by means of chains or ropes attached to an internal winch.

Often, two portcullises to the main entrance would be used. The one closer to the inside would be closed first, and then the one farther away. This was used to trap the enemy, and often, burning wood or fire-heated sand would be dropped onto them from the roof or murder-holes. Hot oil, however, was not commonly used in this manner, contrary to popular belief, since oil was extremely expensive.[1] Arrowslits in the sides of the walls enabled archers and crossbowmen to eliminate the trapped group of attackers.

In England, working portcullises survive at the Tower of London, Monk Bar[2] in York, Amberley Castle, and Hever Castle.[3] 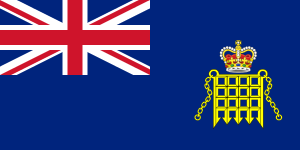 The ensign of HM Customs & Excise.

The portcullis was the heraldic badge of the House of Beaufort, and the first Tudor king, Henry VII, who was of matrilineal Beaufort descent, adapted both the portcullis and the Tudor rose into Royal badges of the House of Tudor. Since then, the portcullis has been a moderately common motif of English heraldry, especially that heraldry dating from the Tudor period. The heraldic office of Portcullis Pursuivant of Arms in Ordinary, a junior officer of arms in the College of Arms at London, dates from this period.

It is through Lord Charles Somerset, son of the 5th Duke of Beaufort, that the portcullis has found its way into several South African coats of arms. Somerset established several towns during his governorship at the then Cape Colony and named them for his family. These include Worcester, Somerset West, Fort Beaufort and Beaufort West. Institutions that derive the portcullis from these arms include a school, chamber of commerce and a rugby club. Other (approximately 30) South African coats of arms that include a portcullis are not necessarily related to either Lord Somerset or any of the town named for and by him.

Although the Palace of Westminster served as the official royal residence for both Henry VII and Henry VIII until 1530, the current use of the portcullis as a symbol of the Palace and of Parliament does not date from that time. Rather, the symbol was developed as part of Sir Charles Barry's plans for the rebuilt Palace after the original burned down on 16 October 1834; he conceptualized the new Palace as a "legislative castle", and the symbol of a castle gate—i.e. a portcullis—fitted well with the scheme.[4][5]

A portcullis was previously found on the British one penny coin and on the pre-decimal thrupenny bit; this has since been replaced by a section of the Royal Arms of the United Kingdom. The badge of the Canada Border Services Agency also bore a portcullis, symbolising the agency's role as "gatekeeper" of goods into Canada. It was also featured in the now-defunct HM Customs and Excise in the United Kingdom.

The portcullis may appear:

It is often shown with chains attached, even when the blazon does not mention them.