Portland Bill is a narrow promontory (or bill) at the southern end of the Isle of Portland, and the southernmost point of Dorset, England. One of Portland's most popular destinations, the popular attraction Portland Bill Lighthouse is found in the area. The surrounding coast of Portland, namely Portland Bill and Chesil Beach, have been notorious for the many vessels that became shipwrecked in the area over the centuries. The dangerous coastline, which features shallow reefs and the Shambles sandbank, was proven more hazardous due to the strong tidal race known as the Portland Race.[1]

The Bill is still an important way-point for coastal traffic, and three lighthouses have been built to protect shipping, in particular from its strong tidal race and shallow reef. The original two lighthouses guided vessels around the coast from 1716, until they were replaced in 1906 by the current lighthouse.[2] 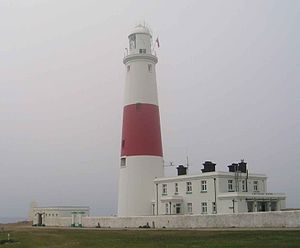 Portland Bill Lighthouse
File:Portland Stone.JPG
Piles of stone at Portland Bill from ex-quarrying in the area

From Roman times, beacon fires would be lit to warn passing ships of the danger of the Bill.[3] During the early 18th-century, a petition to Trinity House had been put forward for a lighthouse, however Trinity House opposed it. The demand continued for over a decade until Trinity House finally conceded that a lighthouse at the Bill was necessary. George I granted Trinity House's patent on 26 May 1716.[1][3] Trinity House then issued a 61-year lease to William Barrett and Francis Browne at a price of £100, to build and maintain one or more lighthouses.[4]

One lighthouse was built at Branscombe Hill, while the other was situated on lower land.[3] The two lighthouses shone out for the first time on 29 September 1716. Over time Trinity House were made aware that the lights were being poorly maintained, and they carried out an inspection during 1752, which led to the termination of the lease, and all responsibilities reverting back to Trinity House.[1][5] In 1789, the Old Lower Lighthouse demolished and rebuilt. In 1844 Trinity House erected a white stone obelisk at the southern tip of the Bill to warn of the low shelf of rock extending southwards into the sea. In 1859 the authority also placed the first lightship at the Shambles sandbank.[6] By the mid-19th century Trinity House began to express dissatisfaction with the two current lighthouses, and again had both rebuilt in 1869.[1][5]

The cliffs at Portland Bill were once quarried until the early 20th-century. A reminder is Pulpit Rock, an artificial stack of rock, left in the 1870s after a natural arch was cut away by quarrymen at the Bill Quarry. Today it is a popular attraction.[7] At the turn of the 20th-century, Trinity House put forward plans for a new lighthouse at Bill Point, to replace both current lighthouses.[5][1] It was completed in 1905, and first shone on 11 January 1906.[3] From that point the higher and lower lighthouses became disused, and were soon auctioned.[3][8] After various changes in ownership, the Old Lower Lighthouse became a bird observatory in 1961,[9] while the Old Higher Lighthouse was the home of Marie Stopes from 1923 to 1958, and today is a holiday let.[10] A proper road, as opposed to a simple track, to Portland Bill, was laid in 1922, and this helped the Bill become a tourist destination.[11]

A coastguard lookout at Portland Bill was first built in 1934. When it closed in the 1990s, it was taken over by the National Coastwatch Institution, who rebuilt the station later in the 21st century. NCI Portland Bill continues to operate today.[12] During the 1960s the Ministry of Defence Magnetic Range was built at the Bill, where testing could be performed away from stray electric and magnetic fields. Further up the hill at Branscombe was also the Royal Navy Portland Bill W/T Station, which was established during the early 20th-century, and remained active for wireless communications until the 1990s.[13] In 1976, the Shambles lightship was permanently withdrawn and replaced by automatic buoys.[14] The lighthouse was demanned on 18 March 1996, and all monitoring and control was then transferred to the Trinity House Operations & Planning Centre in Harwich. The lighthouse has a visitor centre, while tours are conducted to take visitors to the top of the lighthouse.[15]

Aside from the lighthouses, Pulpit Rock and the Trinity House Obelisk as Portland Bill's key attractions, there are other features in the area. Close to the MOD range at the Bill is Portland's main Raised Beach.[16] A fishing crane, known as Red Crane, is situated on the cliff edge at Portland Bill.[17] The area holds many beach huts.[18] The huts often sell for prices around £30,000.[19] There are a few commercial businesses in the area, including a restaurant - The Lobster Pot - and a pub - The Pulpit Inn. During the mid-1980s, Lobster World was built, but was not a commercial success, and in 1989 it was converted into a luxury four-bedroom house.[16]

The surrounding fields between the Bill and Southwell are made up of an ancient strip field system, once found all over the island. They date from Saxon times. The nearby Culverwell Mesolithic Site is a Mesolithic settlement, located along the Portland Bill Road. The site is said to be circa 7500-8500 years old and has also become a scheduled monument under the Ancient Monuments and Archaeological Areas Act 1979. This includes surrounding fields, also relating to the Mesolithic period, and these fields lead across to the coastline.[25][26]