As Portland's largest and most recent lighthouse, the Trinity House operated Portland Bill Lighthouse is distinctively white and red striped, standing at a height of 41 metres (135 ft). The tower is approximately 114 feet. The lighthouse was completed by 1906 and first shone out on 11 January 1906.[2]

Both Portland Bill and Chesil Beach are the locations of many wrecks of vessels that failed to reach Weymouth or Portland Roads. Portland Bill Lighthouse guides vessels heading for Portland and Weymouth through these hazardous waters as well as acting as a waymark for ships navigating the English Channel.[3] 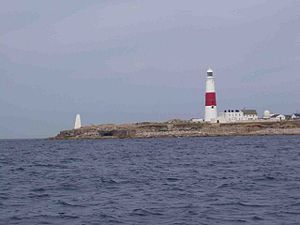 Portland Bill Lighthouse and the surrounding area from the sea

Originally the two original lighthouses, now known as the Old Higher Lighthouse and Old Lower Lighthouse, operated as a pair at Portland Bill. They were first constructed in 1716, and both rebuilt in 1869. They continued to warn ships off Portland's coast until 1906, when both were decommissioned following the completion of the present lighthouse.[4] At the turn of the 20th-century, Trinity House put forward plans for the building of a new lighthouse at Bill Point, to replace both of the lighthouses. A committee was formed in 1903 to work alongside Trinity House for the acquisition of the land at the Bill,[5] which Trinity House paid £300 for.[6]

The design of the lighthouse was created by Sir Thomas Matthews.[7] In October 1903 the builders Wakeham Bros. of Plymouth began work on the foundations, with the completion of the lighthouse being planned for September 1905.[8] Chance & Co of Birmingham supplied and fitted the lantern.[9] The lighthouse was completed in 1905, at a cost of £13,000, and the lamp was first lit on 11 January 1906.[4] On 18 March 1996 the lighthouse was demanned, and all monitoring and control of the station was transferred to the Trinity House Operations & Planning Centre in Harwich.[10]

As Portland's prime attraction, the Portland Bill Lighthouse is open to the public, with tours operated by Trinity House, and a visitor centre, housed in the former lighthouse keeper's quarters. The original visitor centre had been operational since 1997, but closed in September 2013 due to lack of funding by Weymouth and Portland Borough Council.[11] A new renovated centre opened in March 2015, and features exhibits on the lighthouse, its keepers, and Trinity House.[12]

The tours of Portland Bill Lighthouse are organised by The Crown Estate under licence from the Corporation of Trinity House.[13] Often lasting approximately 45 minutes, visitors are able to climb the 153 steps to the top of the lighthouse on a guided tour with a former Lighthouse Keeper.[14]

Portland Bill Lighthouse uses a 1 Kw Mbi lamp and 4 Panel 1St Order Catadioptric Rotating Lens. The light flashes four times every 20 seconds and has an intensity of 635,000 candelas, with a range of 25 nautical miles. Also having a fog signal for times of bad weather, the signal uses a four-second blast every 30 seconds, with a range of 2 nautical miles.[3] The Type F diaphone was decommissioned in 1996, but restored in 2003 for the benefit of visitors.[15]