The Portland Branch railway was a railway line located on the Isle of Portland in the English county of Dorset. The line operated from the late nineteenth century until closing to passengers in 1952 and goods in 1965. For a short line, it had a complex history, built in three separate sections and operated jointly by two rival railway companies. Its construction needed twelve years of blasting through solid rock and three extensions of Parliamentary time.

The need in the early 1820s to transport stone led to an older railway, the Merchant's Railway, being promoted. A public company authorised by Act of Parliament, the company existed for a long time after the closure of the railway. The railway initially consisted of a tramway, then an incline from Priory Corner to Castletown Pier. This was a distinct railway from the later Portland Branch, although an attempt by the Easton and Church Hope railway to take it over failed at the parliamentary stage. The line was at any event not standard gauge and the stock not compatible with main line standards.

A line from Weymouth to Portland was part of the original plan for the Wilts Somerset and Weymouth railway but not followed through. Then in 1861 two schemes were put forward, one down Weymouth Backwater and another including a harbour tramway. The harbour scheme was constructed. An Agreement of 1862 leased the line in perpetuity to the GWR and the LSWR who agreed to work it jointly. Construction of the Weymouth and Portland railway started at the end of 1862 and was completed by April 1864. A need for further work on the timber viaducts over the backwater and The Fleet held up the opening until September when another year was spent arguing about where the trains should go in Weymouth station. The line was mixed gauge when it opened on 16 October 1865.

In 1866 another line, the Easton and Church Hope, was proposed on the other side of the Isle of Portland. Initially it was to link Portland's quarries to the sea. This line was started but powers expired in 1872 and the line lay dormant for eleven years. In the meantime an Admiralty railway was built from the end of the Weymouth and Portland line to a pier on the new Admiralty Breakwater, mainly to supply coal to ships. The Easton and Church Hope was revived with hopes of running powers over this line but although construction was authorised in 1884 none was undertaken until 1888. When it did the work involved blasting through three and a half miles of solid rock in a task taking twelve years. A new station was completed at Easton in 1900. A delay caused by the need to bring the Admiralty stretch up to passenger standard followed. The Admiralty terminated its agreement with the GWR and LSWR, allowing the Easton and Church Hope to carry out the work itself. The line opened to passenger traffic on 1 September 1902.

This left the north coast of Portland served by three different railways in a very short distance. [1] 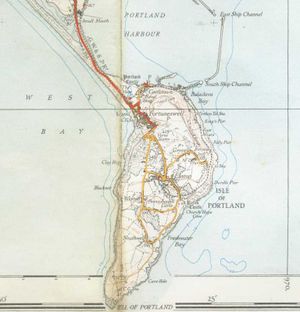 A 1937 Ordnance Survey of Portland showing the Portland Branch Railway

Although worked as a continuous line the Weymouth and Portland and Easton and Church Hope companies nominally remained independent until nationalisation in 1948. In 1908 to 1909 as part of a GWR plan to fight road competition halts were opened on the line, at Westham and Wyke Regis, and Rodwell station was enlarged and a loop installed. In 1908 the wooden backwater bridge was replaced and some land reclaimed. A separate station, known as Melcombe Regis, was built at the northern end of the bridge to save the branch train from having to reverse to enter Weymouth Station. Sandsfoot Castle Halt opened in 1932.

The branch closed to passenger traffic in 1952, remaining open for goods traffic until 1965. Although it officially closed in 1952, Melcombe Regis Station was retained as an overflow of the main Weymouth station, notably on summer Saturdays, until 1959.[2] The backwater bridge remained until it collapsed in a storm in November 1974, and was subsequently demolished.

Today parts of the line can still be walked, but the course of the backwater railway viaduct has long been replaced by Weymouth’s Swannery road bridge, which was built in virtually the same place. The former platforms at Westham and Rodwell are still to be seen and this section is a popular green trailway, the Rodwell Trail. [3]. The bridge over The Fleet at Smallmouth was demolished in 1972. The route now passes through a boatyard, then along the Portland causeway over open common land. Reaching the southwest corner of Portland Harbour the route now lies under a landscaped earthen embankment which marks the edge of Portland's National Sailing Academy - the venue of the 2012 Olympics sailing events. Here there is little evidence of the old railway until east of Castletown, within Portland Port, where it re-emerges to climb the steep hillside of East Weares. This section has become a fine walk and leads to the spectacular cliffside cutting above Church Ope Cove. This section was one of the most scenic coastal branch lines in the south of England; it is now part of Dorset's World Heritage Jurassic Coast.