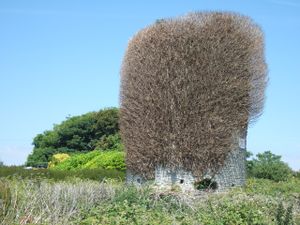 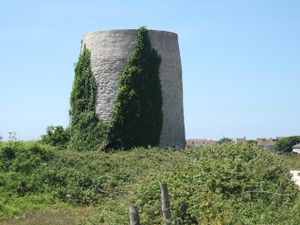 The Portland Windmills are two historic, presumed medieval, stone towers which were once windmills. The disused windmills are located nearby south of Easton village and the east of Weston village. Both towers are found within close proximity to one another, (135 metres), within an area of rolling fields and old quarries. The northern one is found at Cottonfields and the southern one at Top Growlands. They are relatively short mills with conical caps.[1] Both windmills have been separate Grade II Listed monuments since September 1978,[2][3] and are the only historic windmill remains to survive in Dorset.[4]

Although their origins are unclear, both windmills were first recorded in the Land Revenue Accounts of 1608. Both windmills were first featured on a 1626 map by William Simplon and included on the Hutchins map of 1710, where the windmills were highlighted as prominent sea navigation landmarks. Although there had been similar windmills in Brittany, the Channel Islands and other parts of England, the Portland windmills are said to be amongst the earliest of their type in the United Kingdom. Having kept the same primitive form throughout their 400-year existence, the windmills were probably built and maintained by island craftsmen and millers.[4]

Traditionally the windmills were operated by the Pearce family from the 17th century to the 1899. During the Naploeonic Wars, between 1803–1815, both mills were used as look-out posts. The windmills ceased to operate in the late 1890s due to cheap mass-produced flour and bread being readily available via Portland's first modern rail and road links.[4]

The south tower was renovated by ARC Ltd in 1991, shortly after the close quarrying.[5] In 2000, a small amount of care was given to the windmills, in attempt to preserve them, but this did not last.[6] In recent times further quarrying in the area has come within close range of the windmills, but both remain untouched, as does the public footpath coiling around them. In recent years attempts have been made to form a trust to preserve both windmills.