Porto Cervo (Italian pronunciation: [ˌpɔrto ˈtʃɛrvo]) (Deer's Port in English) is an Italian seaside resort in northern Sardinia. It is a frazione of the comune of Arzachena, in the province of Olbia-Tempio. The village is the main centre of the Costa Smeralda. It was created by Prince Karim Aga Khan and various other investors. Porto Cervo has a resident population of 421 inhabitants.

The village itself was designed in the 1950-1960s by architects and landscape designers such as Jacques Couelle, Luigi Vietti and Michele Busiri Vici. 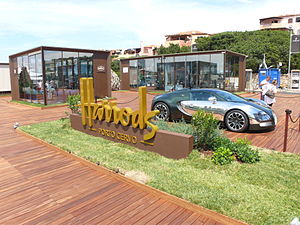 The village is located at the southern and eastern shore of the natural port, where there are shops, a newsagent, bars, restaurants and supermarkets. The other shores of the bay boast the old and the new marina. At the later is the club house of the exclusive Yacht Club Costa Smeralda. The end of the new marina holds a shipyard capable of repairing large luxury yachts.

In a study released by the European luxury real estate brokerage Engel & Völkers, Romazzino Bay in Porto Cervo is the most expensive location in Europe. House prices reach up to 300,000 euros per square meter.[1] In 2011 Costa Smeralda had the second, the 4th and the 6th most expensive hotels in the world, the Pitrizza, the Romazzino and the Cala di Volpe Hotel.[2] In 2012 the Hotel Cala di Volpe, which is featured in the 1977 James Bond film The Spy Who Loved Me is listed at number 7 on World's 15 most expensive hotel suites complied by CNN Go in 2012. The presidential suite of the hotel billed at US$32,736 per night.