Portsmouth is an independent city located in the U.S. commonwealth of Virginia. As of the 2010 census, the population was 95,535.[3] It is part of the Hampton Roads metropolitan area.

The Norfolk Naval Shipyard, often called the Norfolk Navy Yard, is a historic and active U.S. Navy facility that is actually located in Portsmouth rather than Norfolk; the original name "Gosport" was changed to "Norfolk" to reflect its location in Norfolk County, VA. The shipyard upgrades, remodels, and repairs ships of the US Navy and is one of the few facilities in the world with the capability to dry dock an aircraft carrier.

Directly opposite Norfolk, the city of Portsmouth also has miles of waterfront land on the Elizabeth River as part of the harbor of Hampton Roads. There is a ferry boat that takes riders back and forth across the water between Downtown Norfolk and Olde Towne Portsmouth.

Portsmouth is located on the western side of the Elizabeth River directly across from the City of Norfolk. In 1620, the future site of Portsmouth was recognized as suitable shipbuilding location by John Wood, a shipbuilder, who petitioned King James I of England for a land grant. The surrounding area was soon settled as a plantation community.[4] 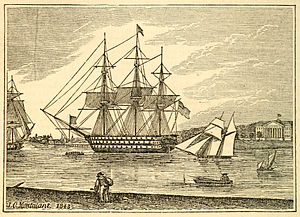 Harbor at Portsmouth in 1843; the Naval Hospital is visible in the background

Portsmouth was founded by Colonel William Crawford, a member of the Virginia House of Burgesses.[5] It was established as a town in 1752 by an act of the Virginia General Assembly and was named for Portsmouth, England.[4]

In 1855, the Portsmouth and Norfolk area suffered an epidemic of yellow fever which killed 1 of every three citizens. It became an independent city from Norfolk County in 1858.

Fearing that the Confederacy would take control of the shipyard at Portsmouth, the shipyard commander ordered the burning of the shipyard. The Confederate forces did in fact take over the shipyard, and did so without armed conflict through an elaborate ruse orchestrated by civilian railroad builder William Mahone (soon to become a famous Confederate officer). The Union forces withdrew to Fort Monroe across Hampton Roads, which was the only land in the area which remained under Union control. 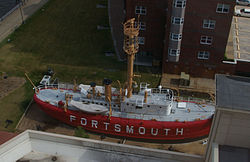 The Lightship Portsmouth is part of the Naval Shipyard Museum

Portsmouth was the county seat of Norfolk County until 1963 when the new city of Chesapeake was formed in a political consolidation with the city of South Norfolk. Portsmouth's other county neighbor, the former Nansemond County, also consolidated with a smaller city, forming the new city of Suffolk in 1974.

One of the older cities of Hampton Roads, in the early 21st century, Portsmouth was undergoing moderate urban renewal in the downtown.

The APM "MAERSK" marine terminal for container ships opened in 2007 in the West Norfolk section.

The Olde Towne section features one of the largest collections of historically significant homes between Alexandria, Virginia and Charleston, South Carolina.[6] For example, located in Olde Towne is Emanuel African Methodist Episcopal Church (AME), which was built by slaves and free men and is the second-oldest building in Portsmouth and the city's oldest black church.

The city contains a number of other historic buildings, as well, including the Pass House, which was built in 1841 by Judge James Murdaugh and occupied by Union troops from 1862 to 1865. Federal forces required Portsmouth residents to obtain a written pass to travel across the Elizabeth River and beyond. These passes were issued from the English basement and thus the name "Pass House" was derived.

Four-story 1825 English basement home furnished entirely with original family belongings. It is evident from the furnishings that the Hill family were avid collectors and lived graciously over a period of 150 years. The house remains in its original condition, with limited renovation through the years.

Established in 1832, Cedar Grove Cemetery is the oldest city-owned cemetery in Portsmouth. Listed on the Virginia and national registers of historic sites, the cemetery is noted for its funerary art and the civic, business, maritime, religious and military leaders who are buried there. Historical markers placed throughout the cemetery allow for self-guided tours. The cemetery is located between Effingham Street and Fort Lane in Olde Towne Portsmouth. Entrance is through the south gate to the cemetery, located on London Boulevard. 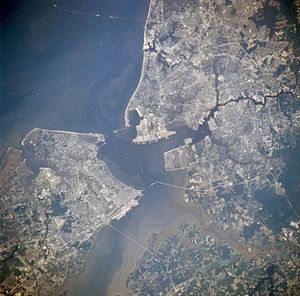 Newport News, Hampton, Portsmouth and Norfolk, Virginia from space in July 1996. (Portsmouth is in the center right portion of the photo)

Portsmouth has a long history as a port town and city. The Olde Towne Business and Historical District is located in the downtown area, where a combination of preservation and redevelopment has been underway. An example is Hawthorn Hotel & Suites at The Governor Dinwiddie Hotel, which was renovated and reopened in 2005 after being closed for more than 10 years. It has been recognized by Historic Hotels of America, a program of the National Trust for Historical Preservation that identifies hotels that have maintained their historical integrity, architecture and ambiance and provides resources for their preservation.[8] The historic hotel was named for Governor Robert Dinwiddie, who was the administrative head of the Colony of Virginia during the time Portsmouth was founded in 1752. It was largely through his efforts that Virginia survived the French and Indian War relatively well.[9] (Dinwiddie County near Petersburg was also named for him).

Other points of interest include the Portsmouth City Park, featuring the 2 ft (610 mm) narrow gauge[10] Portsmouth City Railroad with an operating Chance Rides C.P. Huntington locomotive named Pokey Smokey II. The original Pokey Smokey locomotive was built by Crown Metal Products and ran at the park for many years before being sold at auction. It now runs on the Mideast Railroad in Ederville in Carthage, North Carolina.[11][12]

Portsmouth is governed under the Council-Manager form of government. The current Mayor of Portsmouth, Virginia is Kenneth I. Wright,[13] who was elected November 2, 2010 for the remainder of the unexpired term to end December 31, 2012,[14] and re-elected on November 6, 2012.[15] The City Hall Building, located at 801 Crawford Street, is the regular meeting place of the City Council of The City of Portsmouth, Virginia. The City Council is a legislative body served by six members, elected for four-year terms.

There are a number of institutions of higher education in and within close proximity to Portsmouth. The city is home to the Tri-Cities Higher Education Center of Old Dominion University (ODU), a public research university founded in 1930 whose main campus is located in Norfolk, Virginia.[16] Portsmouth is also home to the Fred W. Beazley Portsmouth Campus of Tidewater Community College, a two-year higher education institution founded in 1968 in South Hampton Roads with additional campuses located in Chesapeake, Norfolk, and Virginia Beach.[17]

Portsmouth's mild humid subtropical climate means outdoor activities can be enjoyed year round. The weather in Portsmouth is temperate and seasonal. Summers are hot and humid with warm evenings. The mean annual temperature is 65 °F (18 °C), with an average annual snowfall of 3 inches and an average annual rainfall of 47 inches. No measurable snow fell in 1999. The wettest seasons are the spring and summer, although rainfall is fairly constant all year round. The highest recorded temperature was 105.0 °F in 1980. The lowest recorded temperature was -3.0 °F on January 21, 1985.[18][19]

Additionally, the geographic location of the city, with respect to the principal storm tracks, is especially favorable, as it is south of the average path of storms originating in the higher latitudes, and north of the usual tracks of hurricanes and other major tropical storms.[20] Snow falls rarely, averaging 3 inches (76 mm) per season.[21]

From the earliest development, Portsmouth has been oriented to the water. In the 1830s, it was the first community in Hampton Roads to receive a new land transportation innovation, railroad service. The Portsmouth and Roanoke Railroad, a predecessor of the Seaboard Air Line Railroad, extended to the rapids of the Roanoke River on its fall line near Weldon, North Carolina. It was to be 20 more years before its bigger neighbor, the city of Norfolk, also received a rail line, in 1858, when the Norfolk and Petersburg Railroad was completed.

In the 21st century, the city has access to lines of CSX Transportation, Norfolk Southern and three short line railroads. Portsmouth is served by Interstate 264 and Interstate 664, which is part of the Hampton Roads Beltway. U.S. Route 17 and U.S. Route 58 pass through. The Elizabeth River is crossed via the Midtown Tunnel, the Downtown Tunnel and Berkley Bridge combination.

Transportation within the city, as well as the other cities of Hampton Roads, is served by a regional bus service, Hampton Roads Transit.[29] 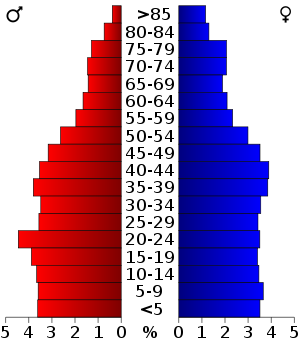 There were 38,170 households out of which 30.6% had children under the age of 18 living with them, 41.1% were married couples living together, 10.9% have a female household with no husband present and 33.2% were non-families. 27.5% of all households were made up of individuals and 10.8% had someone living alone who was 65 years of age or older. The average household size was 2.51 and the average family size was 3.05.

Portsmouth is also served by several television stations. The Hampton Roads designated market area (DMA) is the 42nd largest in the U.S. with 712,790 homes (0.64% of the total U.S.).[40] The major network television affiliates are WTKR-TV 3 (CBS), WAVY 10 (NBC), WVEC-TV 13 (ABC), WGNT 27 (CW), WTVZ 33 (MyNetworkTV), WVBT 43 (Fox), and WPXV 49 (ION Television). The Public Broadcasting Service stations are WHRO-TV 15, Hampton/Norfolk and WUND-TV 2, Edenton, NC. Portsmouth residents also can receive independent stations, such as WSKY broadcasting on channel 4 from the Outer Banks of North Carolina and WGBS-LD broadcasting on channel 11 from Hampton. Portsmouth is served by Cox Cable and Verizon FIOS. DirecTV and Dish Network are also popular as an alternative to cable television in Portsmouth. WAVY-TV and WVBT-TV are both sister stations owned by Media General and have their office and studio located in the city.

The Portsmouth Cavaliers are a basketball team founded in 2010 and scheduled to begin play in the American Basketball Association for the 2011-12 season. Based in Portsmouth, Virginia, the Cavaliers play their home games at the Chick-fil-A Fieldhouse on the campus of Portsmouth Catholic Regional School. Portsmouth is also the home of the Portsmouth Mustangs Semi-Pro Football.