History of the Portsmouth Spartans

The professional American football team now known as the Detroit Lions previously played in Portsmouth, Ohio from its founding in 1929 to its relocation to Detroit in 1934. This article chronicles the team's history during their time as the Portsmouth Spartans. Originally drawing players from defunct independent professional and semi-pro teams, they joined the fledgling National Football League in 1930. Their home stadium was Universal Stadium (known today as Spartan Municipal Stadium). 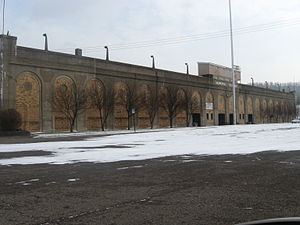 The Spartans formed in 1929, drawing players from defunct independent professional and semi-pro teams in the Ohio-Kentucky-West Virginia tri-state area. During that same year, Portsmouth residents agreed to fund the construction of a football stadium that was comparable to those in neighboring communities along the Ohio River. That approval prompted the National Football League to offer the city a franchise in July 1930, and led to the construction of Universal Stadium, which opened September 14 with a capacity of 8,200.[1] With less than 43,000 residents in 1930, Portsmouth became the NFL's second smallest city, ahead of only Green Bay, which had a population under 38,000. During the team's first year in the league, the Spartans compiled a record of 5–6–3, eighth in the 11-team league in 1930.

Early highlights as the Portsmouth Spartans include the "iron man" game against Green Bay in 1932. In that game, Spartan coach Potsy Clark refused to make even a single substitution against the defending NFL champion Packers. Portsmouth won 19–0 and used only 11 players all game.[2] At the end of the 1932 season, the Spartans were tied for first place in the league with the Chicago Bears.[3] That prompted what in retrospect became known as the first NFL playoff game. Blizzard conditions in Chicago meant the game was moved from Wrigley Field indoors to Chicago Stadium, which allowed for only an 80-yard field. The game was won 9-0 by the Bears, on a touchdown pass from Bronko Nagurski to Red Grange.[3] The resulting interest led to the establishment of Eastern and Western conferences and a regular championship game beginning in 1933.[2]

Despite success on the field, low revenue and the Great Depression threatened the Spartans' survival. In 1934, a group led by George Richards, the owner of Detroit radio station WJR bought the Spartans, and moved them to Detroit for the 1934 season. Richards renamed the team the Lions, as a complement to the Detroit Tigers.

1 The result of the 1932 NFL Playoff Game to determine the NFL champion between the Chicago Bears and the Portsmouth Spartans counted in the standings.