From Infogalactic: the planetary knowledge core
Jump to: navigation, search
For the park and ride site in Preston, Lancashire, see Preston park and ride.

The Portway Park and Ride site is located on the A4 Portway at Shirehampton, to the North West of Bristol, England, adjacent to junction 18 of the M5 motorway.

The site opened in April 2002 with 300 car parking spaces. There had been considerable opposition from local residents.[1] The site was expanded in 2008 to provide 830 car parking spaces to coincide with the opening of the Cabot Circus shopping mall in Broadmead.[2] Up until April 2007 services were operated by First. Currently, services are provided by CT Plus.

One service operates from the site, number 902. The site opens at 6am with the first bus leaving at 6:15am on weekdays and 7:30am on Saturday. The last bus leaves Bristol city centre at 8:48pm on weekdays and 7pm on Saturday. The site closes at 9:30pm. There is no service on Sundays and bank holidays.[3] The 902 leaves the site every 15 minutes, excluding between 7am to 9am and 3:30pm to 6pm when the service increases to every 12 minutes.[4] 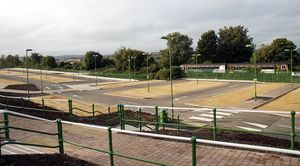 Severn Beach train in the background, passing the park-and-ride site

In 2009 it was proposed that a railway station should be built on the Severn Beach railway line which passes the park and ride site.[5] The plan is supported by Friends of Suburban Bristol Railways and the Bristol branch of the National Union of Rail, Maritime and Transport Workers.[6][7] The plan was approved in October 2012 and initially expected to open the following summer.[8]