From Infogalactic: the planetary knowledge core
Jump to: navigation, search
The racial concept Aryan is not to be confused with early Christian Arianism. 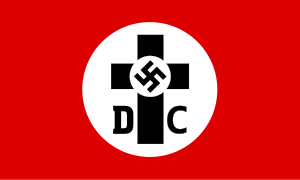 Flag of the German Christians, the movement associated with Positive Christianity 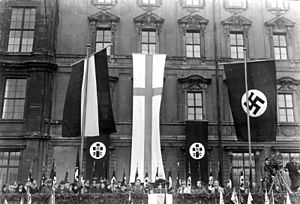 Hitler was supportive of Christianity in public, yet hostile to it in private. Hitler identified as a Christian in an April 12, 1922 speech.[4] Hitler also identified as a Christian in Mein Kampf. However, historians, including Ian Kershaw and Laurence Rees, characterize his acceptance of the term "Positive Christianity" and involvement in religious policy as driven by opportunism, and a pragmatic recognition of the political importance of the Christian Churches in Germany.[2] Nevertheless, efforts by the regime to impose a Nazified "positive Christianity" on a state controlled Protestant Reich Church essentially failed, and resulted in the formation of the dissident Confessing Church which saw great danger to Germany from the "new religion".[5] The Catholic Church also denounced the creed's pagan myth of "blood and soil" in the 1937 papal encyclical Mit brennender Sorge.

The official Nazi ideologist Alfred Rosenberg played an important role in the development of "positive Christianity", which he conceived in discord with both Rome and the Protestant church, whom he called "negative Christianity".[6] Richard Steigmann-Gall queries whether this made Rosenberg a genuine anti-Christian.[7] Rosenberg conceived of Positive Christianity as a transitional faith and amid the failure of the regime's efforts to control Protestantism through the agency of the pro-Nazi "German Christians", Rosenberg, along with fellow radicals Robert Ley and Baldur von Schirach backed the neo-pagan "German Faith Movement", which more completely rejected Judeo-Christian conceptions of God.[8] During the war, Rosenberg drafted a plan for the future of religion in Germany which would see the "expulsion of the foreign Christian religions" and replacement of the Bible with Mein Kampf and the cross with the swastika in Nazified churches.[9]

Adherents of Positive Christianity argued that traditional Christianity emphasized the passive rather than the active aspects of Christ's life, stressing his miraculous birth, his suffering, his sacrifice on the cross and other-worldly redemption. They wanted to replace this doctrine with a "positive" emphasis on Christ as an active preacher, organizer and fighter who opposed the institutionalized Judaism of his day. At various points in the Nazi regime, attempts were made to replace conventional Christianity with its "positive" alternative.

Origins of the idea

Steigmann-Gall traces the origins of Positive Christianity to Higher Criticism of the nineteenth century, with its emphasis on the distinction between the historical Jesus, and the divine Jesus of theology.[11] According to some schools of thought, the saviour-figure of orthodox Christianity was very different from the historical Galilean preacher. While many such scholars sought to place Jesus in the context of ancient Judaism, some writers reconstructed a historical Jesus who corresponded to racialist and anti-semitic ideology. In the writings of such anti-semites as Emile Burnouf, Houston Stewart Chamberlain and Paul de Lagarde, Jesus was redefined as an Aryan hero who struggled against Jews and Judaism. Consistent with their origins in Higher Criticism, such writers often either rejected or minimized the miraculous aspects of Gospel narratives, reducing the crucifixion to a tragic coda to Jesus's life rather than its prefigured culmination. Both Burnouf and Chamberlain argued that the population of Galilee was racially distinct from that of Judea. Lagarde insisted that German Christianity must become "national" in character.[citation needed]

Various historians credit the origins of "Positive Christianity" more to the political acumen and opportunism of the Nazi leadership. Leading Nazis like Himmler, Rosenberg, Bormann, and Goebbels, backed by Hitler, were hostile to Christianity and ultimately planned to de-Christianize Germany.[9] However, Germany had been Christian for over a thousand years, and Hitler recognized the practical reality of the political significance of the Churches in Germany and determined that any moves against the churches must be made in stages. In the words of Paul Berben, "Positive Christianity" therefore came to be advocated as a "term that could be overlaid with any interpretation required, depending on the circumstances" and the party declared itself for religious freedom provided this liberty did not "endanger the State or clash with the views of the 'Germanic Race'".[12]

Historian Derek Hastings has written about the Catholic roots in the nationalistic, and disaffacted Catholic circles of Munich, of the explicit endorsement of 'positive Christianity' in the Nazi party Program. This group helped to shape its tenets, suspicious as they were of both Ultramontanism and Political Catholicism.[13][14]

In Mein Kampf, Hitler reassured his readers that both Christian denominations (Catholicism and Protestantism) were valid bases for the German people, provided the Churches did not intervene in State affairs. In private Hitler scorned Christianity to his friends, but when out campaigning for power in Germany, he publicly made statements in favour of the religion.[12] "The most persuasive explanation of these statements", wrote Laurence Rees, "is that Hitler, as a politician, simply recognised the practical reality of the world he inhabited... Had Hitler distanced himself or his movement too much from Christianity it is all but impossible to see how he could ever have been successful in a free election. Thus his relationship in public to Christianity - indeed his relationship to religion in general - was opportunistic. There is no evidence that Hitler himself, in his personal life, ever expressed any individual belief in the basic tenets of the Christian church".[2]

Positive Christianity was highly supported by the Nazi movement, which promoted its ideals in its journals Der Stürmer and Völkischer Beobachter, both of which stressed the "Nordic" character of Jesus. However, the party was careful to stress that positive Christianity was not intended to be a third confession, nor to contradict the traditional theologies of established churches. As early as 1920 the Nazis proclaimed in their 25-point program that the "Party as such advocates the standpoint of a positive Christianity without binding itself confessionally to any one denomination. It combats the Jewish-materialistic spirit within and around us".[15] Despite this, a number of Nazis openly challenged the established churches. 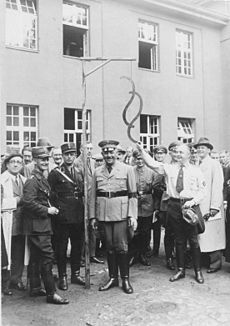 Hanns Kerrl (center). As Reichsminister of Church Affairs, he described Hitler as the "herald of a new revelation" and said that "Positive Christianity" was not dependent on the Apostle's Creed or belief in Christ as the son of God.[3] 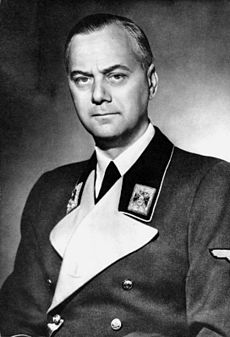 Alfred Rosenberg, was "the Führer's Delegate for the Entire Intellectual and Philosophical Education and Instruction for the National Socialist Party". A proponent of "Positive Christianity", he planned the "extermination of the foreign Christian faiths imported into Germany", and for the Bible and Christian cross to be replaced with Mein Kampf and the swastika.[3]

Alfred Rosenberg, editor of Völkischer Beobachter, wrote The Myth of the Twentieth Century, in which he argued that the Catholic and Protestant churches had distorted Christianity in such a way that the "heroic" and "Germanic" aspects of Jesus's life had been ignored. For Rosenberg, positive Christianity was a transitional ideology that would pave the way to build a new fully racialist faith.[16] Instead of the cross, its symbol was the orb of the sun in the form of a sun cross and in principle it was the elevation of the Nordic race, a rejection of divine revelation, and the promotion of a German god.[17] For Rosenberg the Aryan-Nordic race was divine, and god was in the blood and its culture was the kingdom of heaven, in contrast the Jewish race was evil and it was a satanic counter race against the divine Aryan-Nordic race.[18] Adolf Hitler approved of the work[17] and emphasized the desirability of positive Christianity, yet distanced himself from Rosenberg's more radical ideas, wishing to retain the support of the conservative Christian electorate and social elite.

As an aspect of Gleichschaltung, the regime planned to nazify the Protestant Church in Germany (Evangelical Church) by unifying the separate 28 state churches under a single national church that was controlled by the German Christian faction. However, the subjugation of the Protestant churches proved more difficult than Hitler had envisaged.[19] In 1933, the "German Christians" wanted Nazi doctrines on race and leadership to be applied to a Reich Church, but had only around 3000 of Germany's 17,000 pastors. In July, church leaders submitted a constitution for a Reich Church, which the Reichstag approved. The Church Federation proposed the well qualified Pastor Friedrich von Bodelschwingh to be the new Reich Bishop, but Hitler endorsed his friend Ludwig Müller, a Nazi and former naval chaplain, to serve as Reich Bishop. The Nazis terrorized supporters of Bodelschwingh, and dissolved various church organisations, ensuring the election of Müller as Reich Bishop.[20] Müller's heretical views against St Paul and the Semitic origins of Christ and the Bible quickly alienated sections of the Protestant church. Pastor Martin Niemöller responded with the Pastors' Emergency League which re-affirmed the Bible. The movement grew into the Confessing Church, from which some clergymen opposed the Nazi regime.[19]

Ludwig Müller was elected the first Reichsbischof of the new Reichskirche (so-called German Evangelical Church) in September 1933. However, the German Christians' theological initiatives[21] met with resistance from many pastors, most notably Niemöller, whose Pastors' Emergency League was supported by nearly 40 percent of the Evangelical pastors.[22][23] Following this failure, Hitler backtracked on attempts to directly nazify the churches and became disinterested in supporting the "German Christians".[19]

The German Faith Movement founded by Jakob Wilhelm Hauer adopted a more thoroughly Aryanized form of the ideology, claiming to represent the essence of the "Protestant" spirit by mixing aspects of Christianity with ideas derived from "Aryan" religions such as Vedic Hinduism and "Aryo"-Persian religiosity (Manicheanism, etc.). They attempted to separate Nazi officials from church affiliations, banning nativity plays and calling for an end to daily prayers in schools.[citation needed]

By 1934, the Confessing Church had declared itself the legitimate Protestant Church of Germany. Despite his closeness to Hitler, Müller had failed to unite Protestantism in a single Nazi-dominated Church. In 1935 the Nazis arrested 700 Confessing pastors. Müller resigned. To instigate a new effort at coordinating the Protestant churches, Hitler appointed another friend, Hans Kerrl to the position of Minister for Church Affairs. A relative moderate, Kerrl initially had some success in this regard, but amid continuing protests by the Confessing Church against Nazi policies, he accused churchmen of failing to appreciate the Nazi doctrine of "Race, blood and soil" and gave the following explanation of the Nazi conception of "Positive Christianity", telling a group of submissive clergy:[3]

The Nazi policy of interference in Protestantism did not achieve its aims. A majority of German Protestants sided neither with the "German Christians", nor with the Confessing Church. Both groups also faced significant internal disagreements and division. Mary Fulbrook wrote in her history of Germany:[24]

The Nazis eventually gave up their attempt to co-opt Christianity, and made little pretence at concealing their contempt for Christian beliefs, ethics and morality. Unable to comprehend that some Germans genuinely wanted to combine commitment to Christianity and Nazism, some members of the SS even came to view German Christians as almost more of a threat than the Confessing Church.

— Extract from the Fontana History of Germany (1991)

With the fall of the Nazi regime in 1945, positive Christianity as a movement fell into obscurity. However it continues to be espoused by some Christian Identity groups.[25]