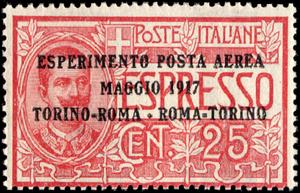 This is an introduction to the postal and philatelic history of Italy.

As Italy was not unified until 1861, its early postal history is tied to the various kingdoms and smaller realms that ruled in the peninsula. 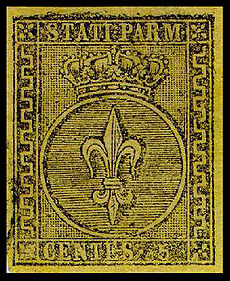 The first stamp of the Duchy of Parma, Piacenza and Guastalla, 1852, 5 centesimi
Main article: Postage stamps and postal history of Tuscany

The Cavallini ("little horses") of Sardinia was an early private mail service, notable for the introduction of prepaid stamped lettersheets in 1819.

In 1850, Count Camillo Cavour drafted a report to the Piedmont Chamber of Deputies proposing postal reform along the lines of that which had been adopted in several European states, and including postage stamps, for which a new word - francobollo - was coined. The reform became law in November, and went into effect 1 January 1851.

After some casting around for expertise in the newfangled art of stamp printing, the government settled on the house of Francesco Matraire in Turin. Matraire produced stamps with an embossed profile of Victor Emmanuel II.

Other states in Italy also issued stamps during the 1850s: Modena, Naples, the Papal States, Parma, Romagna, Sicily, and Tuscany.

The Kingdom of Italy

Matraire's stamps were reprinted several times, and those printed after 17 March 1861 are normally considered the first stamps of Italy. During 1860 and 1861 "Sardinian" stamps supplanted those in use in each of the territories that joined Italy, with Modena, Parma, and Romagna changing over on 1 February 1860, and Naples not converting until 15 September 1862 (although the local authorities had earlier printed stamps featuring the arms of Savoy).

Perforated stamps began in 1862 and, starting on 1 January 1863, uniform postal rates went into effect. In 1862 Count Ambjörn Sparre won the stamp contract, but his designs were not liked, and he seemed unable to produce the stamps. In danger of running out of stamps altogether, at the end of 1862 the Italian government once again turned to Matraire, who quickly produced a 15c value by lithography.

Sparre's contract was cancelled in March 1863, and a new contract let to the British printer De La Rue, who produced a series of eight types ranging from 1c to 2l. They continued in use until the end of 1889.

Humbert succeeded his father in 1878, which necessitated a new issue of stamps. First appearing on 15 August 1879, they were the first stamps of the kingdom to be entirely designed, engraved, and printed by Italians. Since considerable stocks of Victor Emmanuel stamps were left over and finances were poor, the old stamps continued in use for some years, and some values of Humbert's stamps were little-used during his reign.

The new series incorporated rates and colors mandated by the Universal Postal Union.

In 2007, the issue of an Italian stamp featuring the Croatian city of Rijeka caused a controversy.[3] The stamp referred to the city in its usual Italian name of Fiume, claiming it was former Italian territory. This is seen as offensive in Croatia.