From Infogalactic: the planetary knowledge core
Jump to: navigation, search
Not to be confused with the Postage stamps and postal history of Malta.
File:1966 Sovereign Military Order of Malta stamp .jpg
A stamp from the first series of SMOM stamps issued in 1966
File:SMOM 2004 miniature sheet.jpg
A 2004 miniature sheet of SMOM 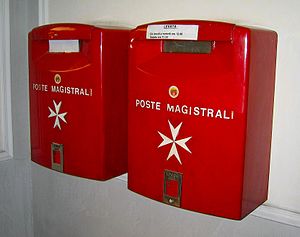 Post boxes of the SMOM at their headquarters in Rome

This is a survey of the postage stamps and postal history of the Sovereign Military Order of Malta.

The Sovereign Military Hospitaller Order of Saint John of Jerusalem, of Rhodes, and of Malta, otherwise known as the Sovereign Military Order of Malta or SMOM is a Roman Catholic order based in Rome, Italy. The order takes its origins from the Knights Hospitaller, an organization founded in Jerusalem in 1050. Following the loss of Christian held territories of the Holy Land to Muslims, the Order operated from Rhodes (1310–1523), and later from Malta (1530–1798), over which it was sovereign.

When the Maltese islands were administered by the Order, the knights set up a postal service. The earliest known letter is dated 14 June 1532, and it was sent from Grandmaster l'Isle Adam to the Bishop of Auxerre in France. The first proper postal service was set up in 1708, and the service was carried out at La Casa del Comun Tesoro in Valletta. The first postal markings on Maltese mail appeared later on in the 18th century, sometime between 1755 and 1791.[1]

The postal administration of the order, known as the Poste Magistrali, was instituted on 20 May 1966 under a Decree of the Grand Master of the order and the first stamps were issued on 15 November 1966. Until recently the stamps were denominated in the currency of the order which was Scudi, Grani and Tari, which roughly equated to the currency of Malta before it joined the Eurozone; 1 scudo = 12 tari = 240 grani = 12 Maltese cents.[2] Since 1 January 2005 the stamps have been denominated in euros.[3]

The stamps are inscribed Poste Magistrali and bear one or more small Maltese Crosses. Early issues were printed by De La Rue, but today a variety of Maltese and Italian printers are used. As well as postage stamps, the Order has produced aerogrammes, maximum cards, first day covers, miniature sheets, postage due stamps and postcards with imprinted stamps.[2]

Each year, one stamp issue is devoted to St. John the Baptist, who is the Order's Patron Saint, and one to the celebration of Christmas.[3]

The SMOM is not a member of the Universal Postal Union.[4]