From Infogalactic: the planetary knowledge core
Jump to: navigation, search
For other uses, see Potash (disambiguation). 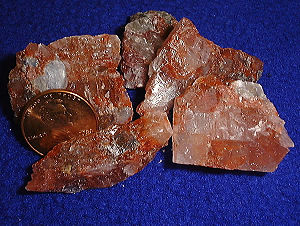 Crystals of potash with a coin for reference. The coin (a US penny) is 19 mm (0.75 in) in diameter and copper in color.

Potash /ˈpɒtæʃ/ is any of various mined and manufactured salts that contain potassium in water-soluble form.[1] The name derives from "pot ash", which refers to plant ashes soaked in water in a pot, the primary means of manufacturing the product before the industrial era. The word "potassium" is derived from potash.[2]

Today, potash is produced worldwide, at amounts exceeding 30 million tonnes per year, mostly for use in fertilizers. Various types of fertilizer-potash thus constitute the single largest global industrial use of the element potassium. Potassium was first derived by electrolysis of caustic potash (aka potassium hydroxide), in 1808.

Potash refers to potassium compounds and potassium-bearing materials, the most common being potassium chloride (KCl). The term "potash" comes from the Middle Dutch word potaschen ("pot ashes", 16th century). The old method of making potassium carbonate (K
2CO
3) was by collecting or producing wood ash (an occupation carried out by ash burners), leaching the ashes and then evaporating the resulting solution in large iron pots, leaving a white residue called "pot ash".[3] Approximately 10% by weight of common wood ash can be recovered as pot ash.[4][5] Later, "potash" became the term widely applied to naturally occurring potassium salts and the commercial product derived from them.[6]

The following table lists a number of potassium compounds which use the word potash in their traditional names:

All commercial potash deposits come originally from evaporite deposits and are often buried deep below the earth's surface. Potash ores are typically rich in potassium chloride (KCl) and sodium chloride (NaCl) and are typically obtained by conventional shaft mining with the extracted ore ground into a powder.[10] Other methods include dissolution mining and evaporation methods from brines.

In the evaporation method hot water is injected into the potash which is dissolved and then pumped to the surface where it is concentrated by solar induced evaporation. Amine reagents are then added to either the mined or evaporated solutions. The amine coats the KCl but not NaCl. Air bubbles cling to the amine + KCl and float it to the surface while the NaCl and clay sink to the bottom. The surface is skimmed for the amine + KCl which is then dried and packaged for use as a K rich fertilizer—KCl dissolves readily in water and is available quickly for plant nutrition.[11]

Potash deposits can be found all over the world, at present deposits are being mined in Canada, Russia, China, Belarus, Israel, Germany, Chile, United States, Jordan, Spain, United Kingdom and Brazil.[12] 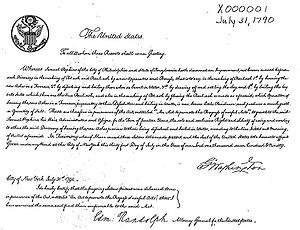 The first U.S. patent was issued for an improvement "in the making of Pot ash and Pearl ash by a new Apparatus and Process"; it was signed by then President George Washington.

Potash (especially potassium carbonate) has been used in bleaching textiles, making glass, and making soap, since about AD 500. Potash was principally obtained by leaching the ashes of land and sea plants. Beginning in the 14th century potash was mined in Ethiopia. One of the world's largest deposits, 140 to 150 million tons, is located in the Tigray's Dallol area.[13] Potash was one of the most important industrial chemicals in Canada. It was refined from the ashes of broadleaved trees and produced primarily in the forested areas of Europe, Russia, and North America. The first U.S. patent of any kind was issued in 1790 to Samuel Hopkins for an improvement "in the making of Pot ash and Pearl ash by a new Apparatus and Process".[14] "Pearl ash" was a purer quality made by the ignition of cream of tartar. Potash pits were once used in England to produce potash that was used in making soap for the preparation of wool for yarn production.

As early as 1767, potash from wood ashes was exported from Canada, and exports of potash and pearl ash (potash and lime) reached 43,958 barrels in 1865. There were 519 asheries in operation in 1871. The industry declined in the late 19th century when large-scale production of potash from mineral salts was established in Germany. In 1943, potash was discovered in Saskatchewan, Canada, in the process of drilling for oil. Active exploration began in 1951. In 1958, the Potash Company of America became the first potash producer in Canada with the commissioning of an underground potash mine at Patience Lake; however, due to water seepage in its shaft, production stopped late in 1959 but following extensive grouting and repairs, resumed in 1965. The underground mine was flooded in 1987 and was reactivated for commercial production as a solution mine in 1989.[5]

In the late 18th and early 19th centuries, potash production provided settlers in North America a way to obtain badly needed cash and credit as they cleared wooded land for crops. To make full use of their land, settlers needed to dispose of excess wood. The easiest way to accomplish this was to burn any wood not needed for fuel or construction. Ashes from hardwood trees could then be used to make lye, which could either be used to make soap or boiled down to produce valuable potash. Hardwood could generate ashes at the rate of 60 to 100 bushels per acre (500 to 900 m3/km2). In 1790, ashes could be sold for $3.25 to $6.25 per acre ($800 to $1,500/km2) in rural New York State – nearly the same rate as hiring a laborer to clear the same area. Potash making became a major industry in British North America. Great Britain was always the most important market. The American potash industry followed the woodsman's ax across the country. After about 1820, New York replaced New England as the most important source; by 1840 the center was in Ohio. Potash production was always a by-product industry, following from the need to clear land for agriculture.[15] 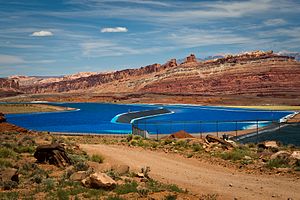 Most of the world reserves of potassium (K) were deposited as sea water in ancient inland oceans. After the water evaporated, the potassium salts crystallized into beds of potash ore. These are the locations where potash is being mined today. The deposits are a naturally occurring mixture of potassium chloride (KCl) and sodium chloride (NaCl), better known as common table salt. Over time, as the surface of the earth changed, these deposits were covered by thousands of feet of earth.[15]

Most potash mines today are deep shaft mines as much as 4,400 feet (1,400 m) underground. Others are mined as strip mines, having been laid down in horizontal layers as sedimentary rock. In above-ground processing plants, the KCl is separated from the mixture to produce a high-analysis potassium fertilizer. Other potassium salts can be separated by various procedures, resulting in potassium sulfate and potassium-magnesium sulfate.

Today some of the world's largest known potash deposits are spread all over the world from Saskatchewan, Canada, to Brazil, Belarus, Germany, and the Permian Basin. The Permian basin deposit includes the major mines outside of Carlsbad, New Mexico, to the world's purest potash deposit in Lea County, New Mexico (not far from the Carlsbad deposits), which is believed to be roughly 80% pure. (Osceola County, Michigan has deposits 90+% pure, however, the only mine there was recently converted to salt production.) Canada is the largest producer, followed by Russia and Belarus. The most significant reserve of Canada's potash is located in the province of Saskatchewan and controlled by the Potash Corporation of Saskatchewan.[1]

In the beginning of the 20th century, potash deposits were found in the Dallol Depression in Musely and Crescent localities near the Ethiopean-Eritrean border. The estimated reserves are 173 and 12 million tonnes for the Musely and Crescent, respectively. The latter is particularly suitable for surface mining; it was explored in the 1960s but the works stopped due to the flood in 1967. Attempts to continue mining in the 1990s were halted by the Eritrean–Ethiopian War and have not resumed as of 2009.[16]

Recently, recovery of potassium fertilizer salts from sea water has been studied in India.[17] During extraction of salt from seawater by evaporation, potassium salts get concentrated in bittern, an effluent from the salt industry.

In 2013, almost 70% of potash production was controlled by two cartels, Canpotex and the Belarusian Potash Company. The latter was a joint venture between Belaruskali and Uralkali, but on July 30, 2013 Uralkali announced that it had ended the venture.[18]

Potassium is the third major plant and crop nutrient after nitrogen and phosphorus. It has been used since antiquity as a soil fertilizer (about 90% of current use).[4] Elemental potassium does not occur in nature because it reacts violently with water.[20] As part of various compounds, potassium makes up about 2.6% of the weight of the Earth's crust and is the seventh most abundant element, similar in abundance to sodium at approximately 1.8% of the crust.[21] Potash is important for agriculture because it improves water retention, yield, nutrient value, taste, color, texture and disease resistance of food crops. It has wide application to fruit and vegetables, rice, wheat and other grains, sugar, corn, soybeans, palm oil and cotton, all of which benefit from the nutrient’s quality enhancing properties.[22]

Demand for food and animal feed has been on the rise since 2000. The United States Department of Agriculture’s Economic Research Service (ERS) attributes the trend to average annual population increases of 75 million people around the world. Geographically, economic growth in Asia and Latin America greatly contributed to the increased use of potash-based fertilizer. Rising incomes in developing countries also was a factor in the growing potash and fertilizer use. With more money in the household budget, consumers added more meat and dairy products to their diets. This shift in eating patterns required more acres to be planted, more fertilizer to be applied and more animals to be fed—all requiring more potash.

After years of trending upward, fertilizer use slowed in 2008. The worldwide economic downturn is the primary reason for the declining fertilizer use, dropping prices, and mounting inventories.[23][24]

The world's largest consumers of potash are China, the United States, Brazil, and India.[25] Brazil imports 90% of the potash it needs.[25]

Potash imports and exports are often reported in "K2O equivalent", although fertilizer never contains potassium oxide, per se, because potassium oxide is caustic and hygroscopic.

In addition to its use as a fertilizer, potassium chloride is important in many industrialized economies, where it is used in aluminium recycling, by the chloralkali industry to produce potassium hydroxide, in metal electroplating, oil-well drilling fluid, snow and ice melting, steel heat-treating, in medicine as a treatment for hypokalemia, and water softening. Potassium hydroxide is used for industrial water treatment and is the precursor of potassium carbonate, several forms of potassium phosphate, many other potassic chemicals, and soap manufacturing. Potassium carbonate is used to produce animal feed supplements, cement, fire extinguishers, food products, photographic chemicals, and textiles. It is also used in brewing beer, pharmaceutical preparations, and as a catalyst for synthetic rubber manufacturing. These non-fertilizer uses have accounted for about 15% of annual potash consumption in the United States.[1]

Potash (potassium carbonate) along with hartshorn was also used as a baking aid similar to baking soda in old German baked goods such as lebkuchen, or gingerbread.[30]