From Infogalactic: the planetary knowledge core
Jump to: navigation, search
For other uses, see Potosi (disambiguation).

Potosí is a city and the capital of the department of Potosí in Bolivia. It is one of the highest cities in the world by elevation at a nominal 4,090 metres (13,420 ft)[2] For centuries, it was the location of the Spanish colonial mint.

Potosí lies at the foot of the Cerro de Potosí[3]—sometimes referred to as the Cerro Rico ("rich mountain")—a mountain popularly conceived of as being "made of" silver ore, dominates the city. The Cerro Rico is the reason for Potosí's historical importance, since it was the major supply of silver for Spain during the period of the New World Spanish Empire.

The silver was taken by llama and mule train to the Pacific coast, shipped north to Panama City, carried by mule train across the isthmus of Panama to Nombre de Dios or Portobelo whence it was taken to Spain on the Spanish treasure fleets.

Located in the Bolivian Tin Belt, Cerro Rico de Potosi is the world's largest silver deposit and has been mined since the sixteenth century, producing up to 60,000 tonnes by 1996, and estimates are that much silver still remains. Potosi became the second largest city, and the site of the first mint, in the Americas. By 1891, low silver prices prompted the change to mining tin, which continued until 1985. At peak production in the sixteenth and seventeenth centuries, the ore contained up to 40% silver.[4]:374

The ore deposits reside in veins present in the dacite volcanic dome. The hill is "honeycombed" with underground workings, reaching from the summit to depths of 1,150 metres (3,770 ft). The conical hill has a reddish-brown gossan cap of iron-oxides and quartz, with grayish-blue altered dacite and many mine dumps below.[4]:374–376

Basement rocks consist of Ordovician clastic sediments consisting of phyllite with some sandstone interbedding. At about 13.8 Ma, the dome was extruded. During the explosive process, the Venus breccia formed when the ascending dacite magma reacted with groundwater to produce a phreatic eruption. The released pressure allowed the formation of the Caracoles tuff ring on top of the breccia. The magma then extruded outward from a dike to form a volcanic dome over the tuff. The dacite dome is 1,700 metres (5,600 ft) by 1,200 metres (3,900 ft) at the surface and narrows down to the 100 metres (330 ft) wide dike at depth. Hydrothermal circulation and fracturing soon followed, altering the dacite and depositing ore minerals and gangue in the veins.[4]:375,381,384 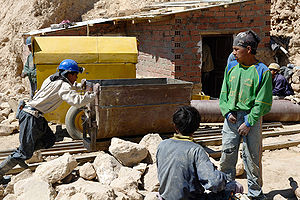 Founded in 1545 as a mining town, it soon produced fabulous wealth, and the population eventually exceeded 200,000 people.

In Spanish there is still a saying, vale un Potosí, "to be worth a Potosí" (that is, "to be of a great value"). For Europeans, Peru—Bolivia was part of the Viceroyalty of Peru and was known as Alto Perú before becoming independent as part of Bolivia. Potosi was a mythical land of riches, it is mentioned in Miguel de Cervantes' famous novel, Don Quixote (second part, chap. LXXI) as a land of "extraordinary richness". One theory holds that the mint mark of Potosí (the letters "PTSI" superimposed on one another) is the origin of the dollar sign, although the likelier origin of the symbol is the $-shaped scroll-wrapped columns on the reverse of the Spanish Dollar. Such "pieces of eight" circulated in the English-speaking Colonies far more frequently than British coinage and were the basis for both the U.S.'s coinage proportions and her original fineness of utensil silverware (American 90% "coin" silver versus English 92.5% sterling).

Native laborers were used to work on its mines through the traditional Incan mita system of contributed labor. Many of them died due to the harsh conditions of the mine life.

According to Noble David Cook, "A key factor in understanding the impact of the Potosi mita on the Indians is that mita labor was only one form of work at the mines. A 1603 report stated that of 58,800 Indians working at Potosi, 5100 were mitayos, or less than one in ten. In addition to the mitayos there were 10,500 mingas (contractual workers) and 43,200 free wage earners. Yet mitayos were required to do the work others refused: predominantly the transport of the ore up the shafts to the mouth of the mine."[5]

During the Bolivian War of Independence (1809–1825), Potosí frequently passed between the control of Royalist and Patriot forces. Major leadership mistakes came when the First Auxiliary Army arrived from Buenos Aires (under the command of Juan José Castelli), this led to an increased sense that Potosi required its own independent government.

When the second auxiliary army arrived, it was received well and the commander, Manuel Belgrano, did much to heal the past wounds inflicted by the tyrannical Castelli. When that army was forced to retreat, Belgrano took the calculated decision to blow up the Casa de la Moneda. Since the locals refused to evacuate, the explosion would have resulted in many casualties. The fuse was lit, but disaster was averted by locals who put the fuse out. Two more expeditions from Buenos Aires would seize Potosí. 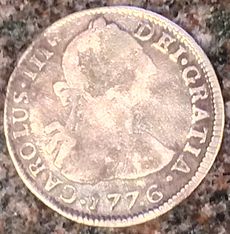 There is no authoritative etymology for the word "Potosí." According to legend, in about 1462, Huayna Capac, the eleventh Sapa Inca of what by then was known as the Inca Empire "set out for Ccolque Porco and Andaccaua, the location of his mines from which were taken innumerable arrobas of silver" (an arroba is a Spanish unit of weight equivalent to approximately 25 pounds (11 kg)). Before leaving there, he saw Potosí, and admiring its beauty and grandeur, he said (speaking to those of his Court):

'This doubtless must have much silver in its heart'; whereby he subsequently ordered his vassals to go to Ccolque Porco ... and work the mines and remove from them all the rich metal. They did so, and having brought their tools of flint and reinforced wood, they climbed the hill; and after having probed for its veins, they were about to open those veins when they heard a frightening thunderous noise which shook the whole hill, and after this, they heard a voice which said: 'Do not take the silver from this hill, because it is destined for other masters.' Amazed at hearing this reasoning, the Incan vassals desisted in their purpose and returned to Porco and told the king what had happened; relating the occurrence in their own language, on coming to the word noise, they said 'Potocsí' which means there was a great thunderous noise, and from that later was derived (corrupting a letter) the name of potosí."[citation needed]

The actual sharp structure of the term is contrary to the nature of both Aymara and Quechua. Another explanation, given by several Quechua speakers,[specify] is that potoq is an onomatopoeic word that reproduces the sound of the hammer against the ore, and oral tradition has it that the town derived its name from this word.

Potosí features a rare climate for a city of its size, due to its extreme elevation at over 4000m. Semiarid and with average temperatures in its warmest month sitting right on the 10 °C threshold, the cities climate straddles that of the subtropical highland climate (Cwc, according to the Köppen climate classification), with subpolar oceanic characteristics and an alpine climate (E). Summers are cool and wet with daily highs rarely rising above 20 °C, while winters feature cooler days with much colder nights averaging -4 °C. These low temperatures are a result of the extreme precipitation deficit during the winter months with the resulting aridity leading to an increased diurnal temperature variation.

Potosí is home to football team Club Bamin Real Potosí, who play their matches at the 32,000-capacity multi-purpose stadium Estadio Víctor Agustín Ugarte, one of the highest stadia in the world.

The city of San Luis Potosí in Mexico was named after Potosí in Bolivia. In the United States, the name Potosi was optimistically given to lead-mining towns of Potosi, Wisconsin,[8] and Potosi, Missouri, and also to the silver-mining town of Potosi, Nevada.