From Infogalactic: the planetary knowledge core
Jump to: navigation, search
For the abandoned settlement in California, see Potter's Bar, California.

The town dates to the early 13th century but remained a small, mainly agricultural, settlement until the arrival of the Great Northern Railway in 1850.[3] It is now part of the London commuter belt.[4]

The origin of the Potters element of the town's name is uncertain but is generally thought to be either a reference to a Roman pottery, believed to have been sited locally, or alternatively to the Pottere family who lived in neighbouring South Mimms parish.[5] The Bar is thought to refer to the gates leading from the South Mimms parish and into the Enfield Chase parish, or possibly from some sort of toll on the Great North Road,[5] said to have been by what is now the Green Man pub, or at the current entrance to Morven House. See also Temple Bar which is a gate by St Paul's Cathedral.

Potters Bar is located on the Great North Road, one of two road routes from the City of London to the north of England.[6] The road was originally numbered as the A1, and later the A1000.

Potters Bar was historically part of Middlesex[7] and formed the Potters Bar Urban District of that county from 1934.[8] From 1894 to 1934 its area had formed the South Mimms Rural District.[9] In 1965 the district was transferred to Hertfordshire while most of the rest of Middlesex became part of Greater London.[10][11]

The urban district covered an area of 6,129 acres (24.80 km2).[8] In 1939 it had a population of 13,681, increasing to 24,613 in 1971.[12] In 1974 the urban district was abolished and the area became part of the borough of Hertsmere. Having been part of Middlesex, the area continued to form part of the Metropolitan Police District; with the creation of the Greater London Authority it was transferred to the Hertfordshire Constabulary in 2000.[13] 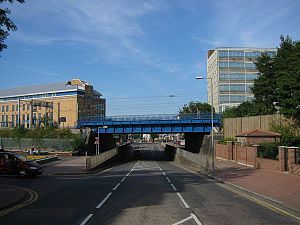 The A1 was built as a major 'arterial' road and a crossroads at Bignells Corner linked it to the Barnet – St Albans road. Potters Bar is now also served by junctions 23 and 24 of the M25 motorway.[2]

Potters Bar railway station is the highest on the line between London's King's Cross railway station and York. The Great Northern route serves various North London suburbs to the south before terminating at either King's Cross or Moorgate station. Northbound, the railway runs to Peterborough, Cambridge, Hatfield and Welwyn Garden City.[15]

The nearest London Underground station is at Cockfosters, which is approximately 2.5 miles south on the A111 from junction 24 of the M25.

Potters Bar has a bus depot that services local bus routes as well as some London bus routes. The 84 bus route travels south to New Barnet and north-west to St. Albans. Other routes include the 298 to Arnos Grove, the 313 to Enfield and Chingford, the 242 to Waltham Cross, the 398 to Borehamwood and the 610 to Enfield (on weekdays) and Hatfield. There are also school bus services run from various places to Dame Alice Owen's School and to Chancellor's School, as well as a service that runs once on a Wednesday from Hatfield to Potters Bar via Cuffley and Colney Heath, numbered 312.

Potters Bar has been the scene of three train crashes; two major and one minor. On 19 March 1898, a train crashed on the platform, but no one was killed or seriously injured. On the night of 10 February 1946, a local train hit buffers at the station, became derailed, and two express trains travelling in opposite directions struck the wreckage. On 10 May 2002, a northbound train derailed at high speed, killing seven people and seriously injuring another 11. On 10 May 2003, a small piece of art that resembles seven faces was erected at the station as a memorial to those killed.[16]

There are eight churches in Potters Bar. These include St Mary the Virgin and All Saints Church at the top of the Walk, the first Anglican parish in the town created from the parish of South Mimms in the 1800s.[17] Other churches are Our Lady and St Vincent, King Charles the Martyr, Christ Church, Potters Bar Baptist Church, St John's Methodist Church[18] and Causeway Free Church. Potters Bar Spiritualist Church is on Hill Rise[19]

There are five secondary schools in Potters Bar, which includes its large green buffer zone;

Lochinver house school is an all-boys preparatory school in Potters Bar, which opened in 1947.[21]

Stormont School is an all-girls preparatory school in Potters Bar, which opended in 1944.[22]

Dame Alice Owen's School is a mixed grant-maintained school in Potters Bar.[23] Originally founded in 1613 and based in Islington until 1973, it is unusual in its 'Visitation' and 'Beer Money' traditions.[24] The trustees of the Dame Alice Owen Foundation are the Worshipful Company of Brewers. It is a partly selective school (25% of its intake is on the basis of pupils doing well on its entry test). It also reserves some places for children from Islington. It specialises in languages, and offers GCSEs in a wide range of languages. It has recently become a music and science college in addition to being a language college.

Potters Bar has a King George's Field in memorial to King George V, which is situated behind the Furzefield Centre. There is a swimming pool and leisure centre run by Hertsmere council, which is home to St Albans and Hertsmere Canoe Club.[25] Also in the town are Potters Bar Town F.C., Potters Bar Swimming Club (PBSC),[26] a Scuba diving Club (the Potters Bar Sub Aqua Club), a tennis club, a cricket club, and a golf course. The Wyllyotts Centre is a theatre, cinema and events venue, and is also the location of the town's museum.[27] Potters Bar is also home to the Hertfordshire Showband (formally known as the Marching Blues).[28]

In 1983, the area around Potters Bar was used for the on-location filming of the comic-horror film, Bloodbath at the House of Death. Also, in 2005, David Walliams and Matt Lucas shot two scenes for the third season of the comedy, Little Britain, one scene at Mount Grace School gym, the other at a wedding shop on the High Street.[29] Potters Bar is also home to the performing arts school, Top Hat Stage School, which has been running classes at Elm Court Community Centre since 1994.