The pound or pound-force (symbol: lb, lbf, or lbf) is a unit of force used in some systems of measurement including English Engineering units and the British Gravitational System.[1] Pounds of force are not to be confused with foot-pounds or pounds-feet, which are a unit of torque, and may be written as "lb·ft" or "lbf·ft".

The pound-force is equal to the gravitational force exerted on a mass of one avoirdupois pound on the surface of Earth. Since the 18th century, the unit has been used in low-precision measurements, for which small changes in Earth's gravity (which varies from place to place by up to half a percent) can safely be neglected.[2]

The 20th century, however, brought the need for a more precise definition. A standardized value for acceleration due to gravity was therefore needed. Today, in accordance with the General Conference on Weights and Measures, standard gravity is usually taken to be 9.80665 m/s2 (about 32.174 049 ft/s2).[3][4]

The acceleration of the standard gravitational field (gn) and the international avoirdupois pound (lbm) define the pound-force as:[5] 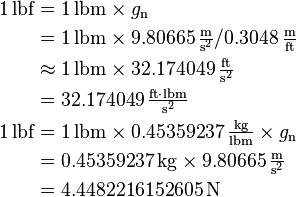 This definition can be rephrased in terms of the slug. A slug has a mass of 32.174049 lbm. A pound-force is the amount of force required to accelerate a slug at a rate of 1 ft/s2, so:

Conversion to other units

In the gravitational systems, the weight of the mass unit (pound-mass) on Earth's surface is approximately equal to the force unit (pound-force). This is convenient because one pound mass exerts one pound force due to gravity. Note, however, unlike the other systems the force unit is not equal to the mass unit multiplied by the acceleration unit[8]—the use of Newton's Second Law, F = m·a, requires another factor, gc, usually taken to be 32.174049 lbm·ft/lbf·s2 = 32.174049 lbm/slug. "Absolute" systems are coherent systems of units: by using the slug as the unit of mass, the "engineering" FPS system avoids the need for such a constant. The SI is an "absolute" metric system with kilogram and meter as base units.