Power and control in abusive relationships

Power and control in abusive relationships is the way that abusers exert physical, sexual and other forms of abuse to gain and maintain control over a victim.

Why do people want power and control - control freaks

In psychology-related slang, control freak is a derogatory term for a person who attempts to dictate how everything around them is done.[1] Control freaks are often perfectionists[2] defending themselves against their own inner vulnerabilities in the belief that if they are not in total control they risk exposing themselves once more to childhood angst.[3] Such persons manipulate and pressure others to change so as to avoid having to change themselves,[4] and use power over others to escape an inner emptiness.[5]

In terms of personality-type theory, control freaks are very much the Type A personality, driven by the need to dominate and control.[6] An obsessive need to control others is also associated with antisocial personality disorder.[7]

Emotional blackmail is a term coined by psychotherapist Susan Forward, about controlling people in relationships and the theory that fear, obligation and guilt (FOG) are the transactional dynamics at play between the controller and the person being controlled. Understanding these dynamics are useful to anyone trying to extricate from the controlling behavior of another person, and deal with their own compulsions to do things that are uncomfortable, undesirable, burdensome, or self-sacrificing for others.[9]

Forward and Frazier identify four blackmail types each with their own mental manipulation style:[10]

The silent treatment is sometimes used as a control mechanism. The silent treatment is a passive-aggressive action where a person feels bad but is unable to express themselves. Their being 'silent' is never a silent act. It generates what the sulker wants − attention and the knowledge others are hurt, plus a feeling of power from creating uncertainty over how long the ‘silence’ will last.[11]

In an intimate relationship

The power and control wheel was developed in 1982 by the Domestic Abuse Program in Minneapolis to explain the nature of abuse, to delineate the forms of abuse used to control another person, and to educate people with the goal of stopping violence. The model is used in many batterer intervention programs, and is known as the Duluth model.[12] Power and control is generally present with violent physical and sexual abuse.[13]

Often the abusers are initially attentive, charming and loving, gaining the trust of the individual that will ultimately become the victim, also known as the survivor. When there is a connection and a degree of trust, the abusers become unusually involved in their partner's feelings, thoughts and actions.[14]

Next, they set petty rules and exhibit "pathological jealousy". A conditioning process begins with alternation of loving followed by abusive behavior. According to Counselling Survivors of Domestic Abuse, "These serve to confuse the survivor leading to potent conditioning processes that impact on the survivor's self-structure and cognitive schemas." The abuser projects responsibility for the abuse on to the victim, or survivor, and the denigration and negative projections become incorporated into the survivor's self-image.[14]

Traumatic bonding occurs as the result of ongoing cycles of abuse in which the intermittent reinforcement of reward and punishment creates powerful emotional bonds that are resistant to change.[15]

Tactics of violent and non-violent relationships[16][17] 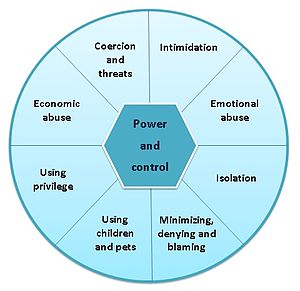 Power and control in violent relationships [18]

A tool for exerting control and power is the use of threats and coercion. The victim may be subject to threats that they will be left, hurt, or reported to welfare. The abuser may threaten that they will commit suicide. They may also coerce them to perform illegal actions or to drop charges that they may have against their abuser.[19]

At its most effective, the abuser creates intimidation and fear through unpredictable and inconsistent behavior.[15] Absolute control may be sought by any of four types of sadists: explosive, enforcing, tyrannical or spineless sadists. The victims are at risk of anxiety, dissociation, depression, shame, low self-esteem and suicidal ideation.[20]

Abused individuals may be intimidated by the brandishing of weapons, destroying their property or other things, or using gestures or looks to create fear.[19]

Emotional abuse include name-calling, playing mind games, putting the victim down, or humiliating the individual. The goals are to make the person feel bad about themselves, feel guilty or think that they are crazy.[19]

Another element of psychological control is the isolation of the victim from the outside world.[13] Isolation includes controlling a person's social activity: who they see, who they talk to, where they go and any other method to limit their access to others. It may also include limiting what material is read.[19] It can include insisting on knowing where they are and requiring permission for medical care. The abuser exhibits hypersensitive and reactive jealousy.[13]

The abuser may deny the abuse occurred to attempt to place the responsibility for their behavior on the victim. Minimizing concerns or the degree of the abuse is another aspect of this control.[19]

Children may be used to exert control, by threatening to take the children or making them feel guilty about the children. It could include harassing them during visitation or using the children to relay messages. Another controlling tactic is abusing pets.[19]

Using "privilege" means that the abuser defines the roles in the relationship, makes the important decisions, treats the individual like a servant and acts like the "master of the castle".[19]

A power and control model has been developed for the workplace, divided into the following categories:[21]

An essential prerequisite of bullying is the perception, by the bully or by others, of an imbalance of social or physical power.[22][23]

Main article: Psychopathy in the workplace

The authors of the book Snakes in Suits: When Psychopaths Go to Work describe a five phase model of how a typical workplace psychopath climbs to and maintains power:[24]

According to Field, bullies are attracted to the caring professions, such as medicine, by the opportunities to exercise power over vulnerable clients, and over vulnerable employees and students.[25]

Institutional abuse is the maltreatment of a person (often children or older adults) from a system of power.[26] This can range from acts similar to home-based child abuse, such as neglect, physical and sexual abuse, and hunger, to the effects of assistance programs working below acceptable service standards, or relying on harsh or unfair ways to modify behavior.[26]

Oppression is the exercise of authority or power in a burdensome, cruel, or unjust manner.[27]

The practice of repression in Zersetzung comprised extensive and secret methods of control and psychological manipulation, including personal relationships of the target, for which the Stasi relied on its network of informal collaborators,[28] (in German inoffizielle Mitarbeiter or IM), the State's power over institutions, and on operational psychology. Using targeted psychological attacks the Stasi tried to deprive a dissident of any chance of a "hostile action".

Individuals with sadistic personality disorder derive pleasure from the distress caused by their aggressive, demeaning and cruel behavior towards others. Sadistic people have poor ability to control their reactions and become enraged by minor disturbances, with some sadists more abusive than others. They use a wide range of behaviors to control others, ranging from hostile glances to severe physical violence. Within the spectrum are cutting remarks, threats, humiliation, coercion, inappropriate control over others, restrictive of others' autonomy, hostile behavior and physical and sexual violence. Often the purpose of their behavior is to control and intimidate others.[29]

At the affective level, the sadist shares many of the critical features of the psychopath: they lack remorse for their controlling and exploitative behavior, they do not experience shame or guilt, and they are unable to empathize with their victims. They are cold hearted.

— Adrian Raine and José Sanmartin, authors of Violence and Psychopathy[29]

The sadistic individual are likely rigid in their beliefs, intolerant of other races or other "out-groups", authoritarian, and malevolent. They may seek positions in which they are able to exert power over others, such as a judge, army sergeant or psychiatrist who misuse their positions of power to control or brutalize others. For instance, a psychiatrist may institutionalize a patient by misusing mental health legislation.[29]

The main objective for one type of serial killer is to gain and exert power over their victim. Such killers are sometimes abused as children, leaving them with feelings of powerlessness and inadequacy as adults. Many power- or control-motivated killers sexually abuse their victims, but they differ from hedonistic killers in that rape is not motivated by lust (as it would be with a lust murder) but as simply another form of dominating the victim.[30] (See article causes of sexual violence for the differences regarding anger rape, power rape, and sadistic rape.) Ted Bundy is an example of a power/control-oriented serial killer. He traveled around the United States seeking women to control.[31]